There comes a time for any executive to begin considering new opportunities. For Troy Gregory, it arrived after working several years for a Monster.com spin-off. Before he could formally hang up his hat, the chairman asked Gregory to stick around. As it turned out, the company was divesting its energy-staffing business. Gregory knew the business was doing well, and he was intrigued. “They were going through a competitive process, but I threw my hat in the ring,” he says.

It was a bold move, and one Gregory was unwilling to lose. He was so determined to buy the company that he leveraged nearly every asset at his disposal. “I basically found every dollar I possibly could, including selling my children’s college-savings plans, to take this chance,” he says. 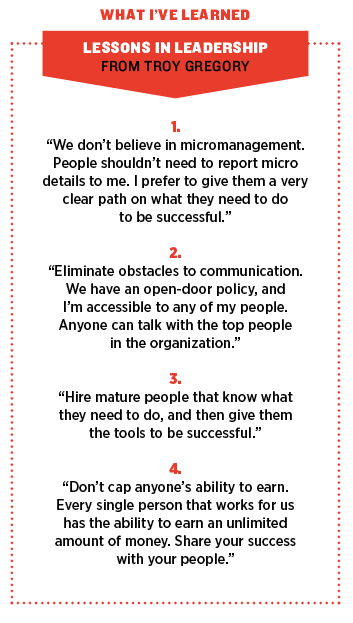 In early 2008, System One was born, with Gregory as its president and CEO. Unfortunately, it wasn’t a great time to be in the staffing business. “We went through some of the toughest economies,” Gregory recalls. “Unemployment was high; they were scary times.”

When Gregory took over the company five years ago, it was sitting at around $165 million in revenue. Since, it has grown despite the turbulent economy. System One has opened a number of new offices, launched new product lines within the staffing industry, and hired a lot of great people. “We really gave a business—that was neglected for a long time by its parent—the love and nurturing that it needed to be successful,” Gregory says.

Much of System One’s story can be seen in Gregory’s early review of the business. “We knew that we had a decent foundation, and a business that had good, loyal customers,” he says. However, there were also plenty of distractions. The company had gone through a number of changes—in its leadership, its branch offices, and even its name. The unstable environment was hurting morale as well as productivity. “When you don’t know where your future is and where your company’s going, and you know that your parent company doesn’t necessarily see you as core, it’s distracting,” Gregory says.

Gregory’s purchase of System One was instrumental in giving employees the safety and commitment they needed to stop feeling vulnerable. And in an industry where people are a company’s most prized possession—System One doesn’t have a proprietary technology or hold any patents—that sense of security is paramount. “When those people don’t feel good and safe, and can’t hold their head up high and feel proud of the company they’re representing, you’re not going to have a very successful business in the staffing industry,” Gregory says.

Once Gregory’s team had acquired System One, it was time to make it a star. People who weren’t going in the same direction as the company were removed, and the focus turned to the future. “We implemented some very sophisticated and robust solutions and strategies to grow our business, but the most important part was that we gave the business the love it needed,” Gregory says. In addition to providing the company and its employees with stability, Gregory has also been diligent in caring for the fiscal side of the business. “Every dollar we made we put back into the business,” he says. It was a change from the company’s past as part of a larger entity, where profits might have been used to fund other divisions that weren’t performing well.

Today, millions of dollars have been spent on technology and system upgrades, and System One’s business-development strategies have been fine tuned: unprofitable offices were closed, and new offices have been added. Recruiting and staffing strategies have also been improved. After almost five years, Gregory’s strategy is paying off. Without making any acquisitions, System One’s annual revenue has doubled to $320 million, and profits have tripled. More importantly, the team is solid and productive. “We believe in offering people the best of both worlds, which is a great career, but also a wonderful quality of life,” Gregory says. After all, it’s the classic System One approach.