As top executives of Deutsch, Val DiFebo and Linda Sawyer have emerged as leaders in the advertising game

Advertising has traditionally been portrayed as a boys’ club—a world of cigars and suits dominated by the Don Drapers and other “Mad Men” of the world. But women like Linda Sawyer and Val DiFebo, top executives at internationally renowned agency Deutsch Inc., have turned those gender stereotypes upside down, emerging as two of the industry’s key players.

Sawyer, the agency’s CEO of North America, and DiFebo, CEO of Deutsch New York, have overseen some of the most prolific advertising campaigns of the past two decades, working with an impressive roster of clients, including Microsoft, IKEA, got milk?, DirecTV, and GoDaddy.com. Overseeing offices in the United States and Canada, it is Sawyer’s big-picture, business-focused approach to growing the company’s capabilities that allows each office to focus on their day-to-day business. Overseeing New York, DiFebo leads a team of stellar professionals—including everyone from account management, planners, data analytics, and media to designers and creative technologists—who help the agency maintain its reputation of innovation while also continuing to attract new clients. “The company has always had a very clear mission,” DiFebo explains, “and that is to be able to positively influence clients’ business results by giving them solutions through our creativity.”

When Sawyer first joined the firm in 1989, it was composed of only 40 employees, though it has since grown exponentially. “Deutsch began as a fairly traditional agency but, over the years, we have expanded and deepened our capabilities in media, CRM, digital, and PR to better serve our clients’ needs,” she says. “Now, Deutsch is 1,000-people strong with $3.3 billion in billings. I’d like to think Val and I had a strong hand in that growth, along with the CEO of the LA office, Mike Sheldon.”

Profile: What advice do you have for women in the advertising business?
DiFebo: I would give the same advice to men and women: be decisive. Being afraid to fail or afraid to make a decision really doesn’t foster anyone’s ability to become a leader or to be successful. You’ll only ever be seen as middle management if you can’t rise above and make a decision.

Profile: How does your managerial style differ from Linda’s?
DiFebo: The interesting thing about Linda and I is that we are so aligned in the way we think and in our approach to business, but the difference is totally in our style. I’m more blunt—I have no problem telling people exactly what I think or sharing a point of view that might be polarizing—while Linda is more contemplative about how she approaches issues. Our chairman, Donny Deutsch, sums up her style perfectly:  “Linda is like a steel fist in a velvet glove.”

Profile: What one word would you use to describe Linda and why?
DiFebo: She truly is a powerhouse. I love the way she can navigate anything that comes her way.

Since joining the firm, Sawyer has worked to position Deutsch as the premiere industry model for full-service advertising firms. In the early ’90s, she helped pioneer the firm’s integrated capabilities offerings—creating a shift in the industry that led to other firms adopting similar platforms. Under Sawyer’s leadership, Deutsch became the North American anchor of the Lowe & Partners global network in 2009, allowing the firm to become part of a global federation of creative and innovative agencies across the world. Deutsch’s alignment to the Lowe family has exponentially enhanced Lowe’s US offering, and has given Deutsch the tools to expand globally. It has also increased Sawyer’s responsibilities to include overseeing not only Deutsch NY and Deutsch LA, but also Lowe Roche Toronto and ICC Lowe Healthcare.

“What I love about my job is that I don’t have a typical day,” Sawyer says. “I work with our management teams to set the strategic direction for the company and ensure that, organizationally, we are continually poised for growth and meeting our clients’ business needs.”

DiFebo joined Deutsch in 1992 and has led the New York office through an exponential
period of growth. Along with Sawyer, DiFebo helped expand Deutsch’s integrated multidisciplinary offering, which directly led to the full-service, high-level business solutions the firm is renowned for today. In 2008, Crain’s New York Business named DiFebo’s office as one of “The Best Places to Work in NYC,” and, in 2011 and in 2012, Advertising Age also named Deutsch Inc. one of the “Best Places to Work.”

Both Sawyer and DiFebo have been recognized for their leadership and achievement in the field through several honors and awards. Sawyer was given the 2009 Matrix Award from the New York Women in Communications organization, and was also named one of the industry’s “Women to Watch” by Advertising Age. She currently has the honor of serving as the director-at-large for the American Association of Advertising Agencies, the chairman emeritus of the board for the Advertising Educational Foundation, and as the chairman of the board for Blow—a styling salon and hair-care line—in addition to many other organizations. Sawyer’s and DiFebo’s respective expertise has also been recognized throughout the media, leading to several guest appearances on the first two seasons of The Apprentice—where they offered marketing insights to the show’s contestants—in addition to appearances on other programs, including The Today Show and CNN. In addition to her media recognition, DiFebo is very involved with the New York Urban League and the Ad Council, in addition to being one of the founding directors of The Hearts of Gold Foundation, an organization that offers support to at-risk mothers. She also serves on the board of trustees for the Buckley Country Day School.

Profile: What is your primary business philosophy?
Sawyer: I am a purist, and, to me, every-thing always comes back to business results. To that end, I think Deutsch epitomizes a culture of accountability and results. I believe this is a people business, so you have to create an environment that is stimulating and motivating to your employees. I also believe in transparency, honesty, and candor—good or bad—and I find people appreciate it and it builds trust.

Profile: What was one of your most
successful ad campaigns?
Sawyer: One campaign for IKEA, which we referred to as the Life Stages campaign, showed different people in different stages of their life and how IKEA understood the way they lived and could meet their needs. In fact, one spot featured a gay couple, which was the first time in mainstream media, and resulted in significant international PR coverage. It reinforced IKEA’s image as a progressive, brave company and brand.

Profile: What one word would you use to describe Val and why?
Sawyer: I need to use three: highly strategic, bold, and big-hearted. Val is an incredibly caring, selfless human being, and she is an inspiring and
admired leader.

Having worked with Deutsch for more than 20 years, both DiFebo and Sawyer worked their way up from mid-level executives to true power players, and they have certainly shaped the company into the success it is today. While Deutsch has enjoyed a long history of prominent female leadership—50 percent of the company’s department heads are women—the same cannot be said for the industry as a whole. Despite the abundance of women working in advertising, DiFebo and Sawyer are still among only a handful of women in the C-suite. “Perhaps by design and luck, I have always worked for men whose criteria for success was plain and simple—performance and results,” Sawyer says. “I never felt that being a woman created a set of unique hurdles, but I know that’s not the case for many women in this business.”

The pair credits a large part of their own successes to the agency’s dynamic culture—one that is smart, confident, compassionate, and stereotype-free. “My objective has always been to attract people who can create innovative solutions and maintain the culture that we have, which is so critical to ourselves and to our clients,” DiFebo says.

“It all boils down to having the best talent with strong leadership skills, developing strong relationships with them, and having open and transparent communication,” Sawyer adds. “Our management team is stellar, so my job is to help them in any way to be their best.”

Despite old-fashioned odds stacked against them, DiFebo and Sawyer both play to win. Each business project is approached with a fighting stance that pushes for agency growth and creating business-building work for clients. “We like to think about winning all the time,” DiFebo explains. “In other words, we want to nail the best talent in the field and want our product or service to be the one that comes out on top.” 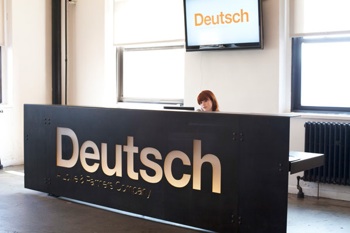 Signing Up For Silicon Valley

Dedication, Know-how, and a Dash of Love