When Becca Polak took over as general counsel of KAR Auction Services, the legal team of the three business units operated in silos. A look at how she shored up the ranks.

Monday April 23, 2007 was an eventful day for Becca Polak. On the previous Friday, ADESA, the wholesale used-vehicle auction company at which she worked, shifted from being public to private through its acquisition by four investment firms. On Monday, all employees at the Carmel, Indiana, headquarters were asked to meet in the main conference room, at which time the new owners of the company—and the new management team—were to be announced.

Like all the other employees, Polak, then a vice president and associate general counsel, was standing in the middle of the crowd. Suddenly, she was pulled into the hall and told that she would become the new general counsel. Moments later, she was at the front with the rest of the new management team. “I had interviewed for the position, but hadn’t been offered the job yet,” Polak recalls. “It was a bit of a whirlwind.” 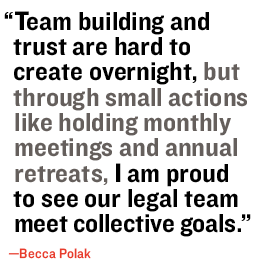 ADESA was acquired by KAR Auction Services, becoming one division of the company alongside Insurance Auto Auctions and Automotive Finance Corporation. Today, KAR is a complete end-to-end solution for automobile remarketing. Polak’s new role as general counsel required her to oversee the legal matters for each of KAR’s business units—handling acquisitions, general corporate and securities matters, compliance, litigation, employment matters, and intellectual property. Alongside a team of more than 30 lawyers, paralegals, and assistants spread across the business units, Polak has made quite an impact, having been recognized in the Indianapolis Business Journal as a Who’s Who in the financial industry and named a “rising star” in Indiana Super Lawyers magazine.

One of the first things Polak began to notice was that the legal teams of the business units operated completely independently. This siloed stance, she felt, was preventing the company from maximizing opportunities that come from sharing ideas and best practices. Polak wanted to find a way for everyone on all of the various legal teams to come together and make the whole greater than the sum of its parts.

In June 2010, to encourage unity, the executive and legal teams, including paralegals and assistants, went to Chicago for the first KAR legal retreat. The heads of the lines of business were brought in, and each described their business unit and provided trends, challenges, and statistics. Then each of the lawyers around the table had an opportunity to talk about their work and current projects. “They were uncomfortable opening up at first, and were concerned about what was privileged information and what wasn’t,” Polak explains. “Eventually, everyone got more comfortable and came to trust each other, as they realized the benefits that could be had from sharing information.”

A little over a year later, in August, the second annual retreat was held at ADESA’s Montréal facility. This time it only featured lawyers and several members of the executive team. Everyone worked an entire day at the auction detailing cars, preparing condition reports, and even working behind the counter at Automotive Finance Corporation. “It was extremely beneficial,” Polak says. “It gave us all a great understanding of what is involved in the core businesses that we work for on a day-to-day basis, and how what we do helps them do their job.”

Now that everyone is back at their desks, the team keeps in touch and networks often. This collaboration could be seen last year, when KAR enhanced its document-retention policy and program. This project, sponsored by the KAR legal team, took the efforts of everyone to roll it out to KAR’s 12,000 employees across North America. Since everyone was facing the same issues, the lawyers and paralegals met often and shared their ideas to provide training to KAR’s staff.

Today, the legal team of the $1.8 billion company is functioning more cohesively, and individual business units are benefiting from each other’s best practices. “Team building and trust are hard to create overnight, but through small actions like holding monthly meetings and annual retreats, I am proud to see our legal team meet collective goals, like the rollout of KAR’s document retention policy,” Polak says. “This project was completed effectively and efficiently, mostly due to fact that our team members assume best intentions and work together to get the job done well for our client, KAR.”

Dedication, Know-how, and a Dash of Love

Technology Waits for No Man (or Company)