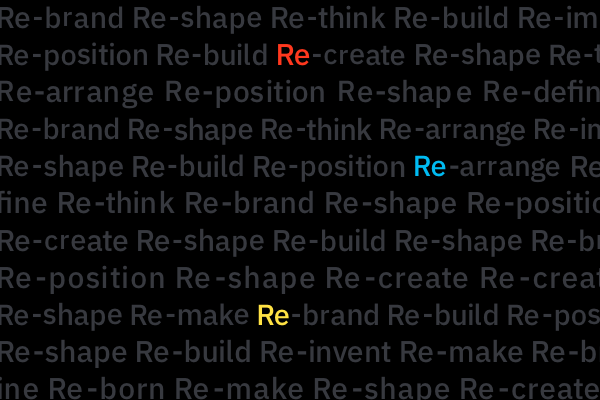 Brand perception and success go hand in hand for any company. From the Nike swoosh synonymous with renowned athletes to fashion models carrying Coach handbags showing off the latest trends, companies will go any distance to ensure that their brand, as well as its recognition by consumers, is seen in the most prestigious limelight.

It’s why rebranding is so common, just on varying scales. On the smaller side, McDonald’s—an icon in the fast food world once known only for its burgers and fries—introduced salads and yogurt as customers sought out healthier options. On a larger scale, the hygiene and fragrance juggernaut Old Spice was once viewed as a product for older generations. That is, until a new media strategy designed around sex appeal and fun was a major success in appealing to younger demographics.

It sounds simple, but without support from your top leadership down to every department, a major rebrand is already set up for failure. One of the first conversations should be to analyze your company’s mission and vision and identify if that needs to be adjusted based on market trends and consumer demand.

Chidi Achara, SVP and chief creative officer, says the mission behind Simon’s recent rebranding came directly from CEO David Simon. “Our aim is to reinforce our position as a preeminent shopping center destination for a multitude of different constituents,” Achara says. “In essence, we now market ourselves not just as landlords or a real estate entity, but as an aspirational lifestyle brand in our own right.”

With the backing of the company’s top leadership, Simon now invests heavily in digital and social media, interactive directories and maps, healthy dining options to replace food courts, and allowing customers to reserve parking spaces. Not only did Simon change the outdated perception of the mall for customers, it changed the perception for retailers, who view Simon as a partner that can elevate individual brands. All of these changes stemmed from a rebrand that was supported from the top down.

Instagram changing its logo design isn’t a major rebranding that required months of intensive strategies, but a major rebranding effort such as Simon’s requires a holistic effort. This is especially true when it comes to an evolving—and largely digital—market. Even for legacy companies, a rebranding campaign almost always needs to incorporate technology—whether it’s through the company’s products or reaching consumers.

Take AARP for example. Throughout its more than fifty-year history, the company had been associated with an aging demographic, but in recent years has been emphasizing its impact on the younger end of their membership spectrum. The organization also wanted to convey the ways that technology can help members. AARP continues to introduce new technology, including the RealPad, a tablet accessible for people age fifty and older who aren’t digitally savvy.

“One of the issue areas that we’re heavily focused on is the technology space—specifically technology for older adults—which historically has been laggard when compared with the general population,” says Terry Bradwell, former EVP and chief enterprise strategy and innovation officer for AARP. “So we saw the opportunity and took a risk.”

And that rebranding risk has paid off. The tablet includes embedded, easily accessible instructional videos, as well as a complementary 24/7 phone service. Part of that strategy, Bradwell says, was that AARP needed to emphasize a culture that is aware of the strengths of the nonprofit’s past while embracing the future.

“Like most organizations, when you start doing things the same way over and over again, you develop a ‘muscle memory,’ and that ‘muscle memory’ becomes an intrinsic part of the organization’s developed culture,” he explains. “Most people that come through our doors may have a preconceived impression of who we are and what we do. But by the time they leave they say, ‘Oh my god, we didn’t realize you guys were doing so much.’”

As technology continues to evolve, so too will the competition. More than ever, markets are becoming saturated with an abundance of choices for consumers.

Panasonic was known for its audio and electronics, but in such a low-margin space today with intense competition, the company is pivoting its efforts to focus more on the internet of things, IT, data, and predictive analytics. TiVo introduced a revolutionary concept in pausing live television and digital video recording (DVR), but DVR became widely implemented with competing cable services. Now, TiVo has expanded its portfolio to encompass the entire entertainment experience with its software and devices.

“We were already a consumer electronics company, and we made a decision to expand our strategy and support and distribute our products in the enterprise world as well,” says Dan Phillips, EVP engineering and services at TiVo. “That’s a different business model.”

And now, twenty of the twenty-five largest domestic multiple-system operators and international operators such as Virgin Media and Vodafone use TiVo’s products across the globe.

Rebranding is all about analyzing what customers want, what your company is delivering, and whether to add to or drop from your current portfolio to address those gaps. For major rebranding efforts, it’s not easy. It requires buy-in from all levels and an honest assessment of where the company is in the market.

“I think that an organization needs a clear, coherent, and compelling vision for a new brand and focused strategy to execute that vision, the appropriate level of resources—whether they are financial or otherwise—and an innovative approach and openness to a degree of calculated risk-taking,” Chidi Achara of Simon says. “Once the team, the vision, the strategy, and the resources are in place, then that leader and that team will need to build alignment and consensus wherever possible internally.”