From the pages of a glossy magazine to front window displays on Fifth Avenue, few industries evoke more feeling and wonder than fashion. There’s a reason why every year thousands flock to New York City’s Fashion Week. Take last year, for instance, when Coach’s whimsical dresses, designer hats, and of course the iconic chic handbags were on display for the company’s fall collection, Coach 1941. With models on the catwalk and celebrities in the front row, the new styles showcased a brand that has been on the forefront of fashion for decades.

Not far from the runway, Chidi Achara was in his New York office at Simon Property Group, the world’s largest operator of luxury and fashion shopping centers. The mild-mannered and amiable executive is no stranger to the world of fashion, having elevated such brands as Levi’s, Cole Haan, and Hugo Boss. Now, he was working on a new venture between Simon, Coach, Facebook, and IMG that would turn just as many heads as those at Fashion Week.

As Achara explains, the four companies teamed up to produce a 360-degree virtual reality film of the Coach New York Fashion Week runway show featuring fall’s newest trends. Facebook then broadcast the film, and viewers were able to download a promotional code for participating Coach stores to receive a gift with purchase. Select Coach stores at Simon locations also featured ocular headsets so that shoppers could watch a virtual reality film of the show.

“We were using cutting-edge technology to create content around New York Fashion Week that could then be amplified digitally and socially across Facebook, our channels, Coach’s channels, and also certain influencers’ channels, while actually broadcasting that content in-store with a specific drive to retail with a promotional angle added to it,” says Achara, senior vice president and chief creative officer of Simon, which owns premier shopping, dining, entertainment, and mixed-use destinations.

As a result, Coach saw a double-digit increase in sales and traffic at participating Coach stores in Simon’s malls versus stores that didn’t participate in the promotion. But just five years ago, this willingness to collaborate on marketing and brand initiatives wasn’t a high priority for Simon’s retailers. For luxury brands such as Louis Vuitton and Tiffany & Co., or mass market operators such as Gap or Nike, success and strong branding go hand in hand. At the time, Simon made less headway marketing itself as a potential partner to the stores that leased space within its properties. So, instead of viewing Simon as an entity that could help elevate the stores’ brands, these brands viewed Simon mostly as a landlord. That was before Simon’s rebranding. Now, the story of Coach is just one example of the impact that partnership with Simon can have on retail brands.

“We’ve found that retailers have been much more open to partnering with Simon on activations that drive traffic to their stores within our centers in ways that are mutually beneficial,” Achara says. “As a result, we’ve worked very closely with leading brands such as Coach, Neiman Marcus, Saks Fifth Avenue, Tiffany, Apple, and many others on developing content, social, and digital support, in order to enhance our collective marketing efforts and consumer engagement strategies.”

Achara was well-positioned to tackle the rebranding that led to this success. He always knew he wanted to be in the creative industry, and he would eventually work in an advertising agency in London. His first take at a rebranding effort would come when he was with Cole Haan in 2012. He worked there as part of a team that Nike, which owned Cole Haan at the time, brought in to rejuvenate the brand for the millennial shopper. It was the foreground that prepared Achara well when he came in to help launch Simon’s rebranding efforts.

“What we’ve done is built an internal, creative marketing agency that services the needs of various internal clients within Simon, whether it’s an individual mall, something broader for the malls, the premium outlets as a whole, or whether it’s the Simon master brand,” he says. “We also collaborate with our retail partners in order to develop activations, content, and programs that drive traffic to their stores in our centers. So increasingly, we are both promoting Simon and our business.”

Simon is a multibillion-dollar enterprise with more than two hundred centers around the US and many around the world. So when Achara and his team sat down for the rebranding, they immediately wanted it to be holistic and entirely comprehensive. “Every aspect of how we present ourselves to the wider world, we want it to be encompassed by this rebranding,” says Achara, adding that it was also essential to develop consensus throughout the company, from division heads to leadership to the board of directors.

After bringing in several talented individuals from around the US, they developed a strategy around their mission from CEO David Simon, which completely redefined perception about shopping at malls. For decades, brand identity and recognition were the strongest factors in driving foot traffic to stores. But with continuing advancements in technology and e-commerce influencing retailers to focus on their websites, Simon needed to build its own identity to drive engagement and excitement from both current and future shoppers. 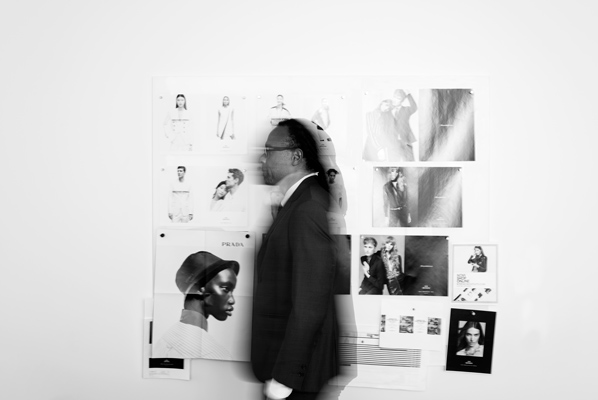 In the past four years, shoppers have taken notice both when visiting one of Simon’s physical locations and its website. Before the rebranding, Achara says the company spent about 10 percent of its budget on digital, but today about 50 percent of the forecast is on digital and social media. Physical locations now include modern and healthy dining options that are replacing traditional food courts. Digital screens in many centers feature continuous news, sports, weather, and entertainment updates. New brands and
merchandise are appearing, such as Bonobos, Tesla, and Apple stores.

Simon has also launched apps to help customers navigate the centers easily. At about a quarter of Simon’s centers, Achara says the locations feature digitally interactive directories and maps that allow point to point navigation that customers can follow on their phones. “You could be at the Sephora store and you want to know how to get to the Gap, and it will then give you point to point navigation with directions that you can follow on your phone,” he says.

Social media has also been introduced strategically at Simon locations. The company partnered with Snapchat to introduce geofilters into many centers, and Simon launched an industry-first Facebook messenger bot, which is a 24/7 self-service digital concierge. Achara says customers can use this to access information about the center at any time for store hours, dining information, or listings. Even the parking lots have not been overlooked. Achara says the company launched an option for customers to reserve a parking space at select malls, which has become a major convenience for customers during busy holiday seasons.

The entire rebranding process took about nine months to complete. For other companies and executives looking to take on such a major effort, Achara says the first step is having the right leadership in place.

“I think that an organization needs a clear, coherent, and compelling vision for a new brand and focused strategy to execute that vision, the appropriate level of resources—whether they are financial or otherwise—and an innovative approach and openness to a degree of calculated risk-taking,” he says. “Once the team, the vision, the strategy, and the resources are in place, then that leader and that team will need to build alignment and consensus wherever possible internally.”

Fashion, just like retail, will always evolve. This year’s New York Fashion Week will have new trends on display. But as fashion, retail, and even technology evolve, so too will Simon.

“Our aim is to reinforce our position as a preeminent shopping center destination for a multitude of different constituents,” Achara says. “In essence, we now market ourselves not just as landlords or a real estate entity, but as an aspirational lifestyle brand in our own right.”

Chidi Achara has developed an unmatched reputation in the creative industry, and his efforts are turning heads not only in the boardroom, but also across the nation.

In 2017, he was named among the top executives in the country by Black Enterprise and was honored as one of Ebony’s Power 100 along with Serena Williams, Chance the Rapper, and the Obamas. While Achara takes pride in these awards and his accomplishments, he’s also using them to help inspire others.

“These awards really mean a lot to me, partly because there are so few men and women of color in positions of leadership and business and other areas of society,” Achara says. “These awards are a great platform to recognize those who are making a positive impact and hopefully can help pave the way for the next generation of diverse leadership and leaders. I’m still shocked and surprised at the number of times I sit in meetings and I’m the only person of color at a senior level. And, for me, this is an area that really needs to be addressed not only corporately, but also in society as a whole. I believe diversity is not only a moral imperative, but it’s also commercially the right thing to do to cultivate diverse, inclusive, and supportive working environments. It’s good business, especially in retail where we are increasingly catering to very diverse audiences of shoppers.”