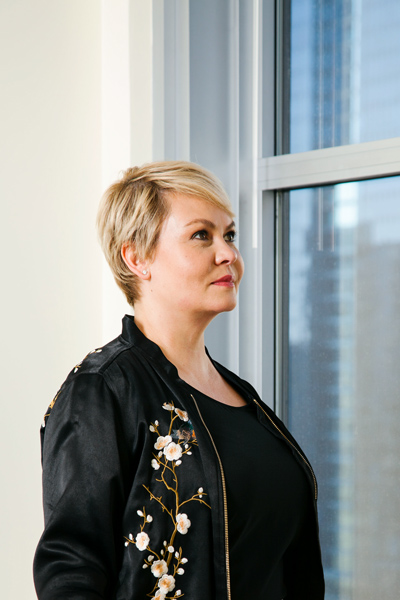 A little more than twenty-five years ago, a fictional character sparked a nationwide debate and shattered preconceived social norms. Murphy Brown was more than a journalist and television news anchor—she was debunking the perception of women in the workplace contrived decades earlier. Played by Candice Bergen, Murphy Brown was in her forties, divorced, and had a child outside of marriage. It was 1992, and Murphy Brown’s narrative shocked and inspired audiences.

The polarity of the character only grew when Vice President Dan Quayle, speaking about family values, criticized the show, stating that Murphy Brown’s decision mocked the importance of fathers, calling the choice to bear a child alone “just another lifestyle choice.” The comments garnered a response from the show on September 21, 1992, when Brown’s character stated: “Perhaps it’s time for the vice president to expand his definition and recognize that, whether by choice or circumstances, families come in all shapes and sizes.”

With that bold statement, the changing tide in the United States was officially in full force. And to this day, the evolution of the contemporary family continues.

“Focusing on the contemporary family is based on everything that has been evolving up to this moment in time, and it isn’t static,” explains Nazca Fontes, founder and CEO of ConceiveAbilities. “It’s more than just family building in the modern world. It is the notion of taking modern technology—coupled with evolving cultural norms and laws—and using that as a framework for an individual’s needs and desires to have family fulfillment. It’s building a family in their own way, on their own terms. And it will constantly change as technology, cultural shifts, and people want to harness the best of what is available.”

Today, we’re witnessing those shifting models of parenthood and family, Fontes continues. It’s not uncommon to see single mothers by choice, single fathers by choice, or same-sex couples pursuing surrogacy as an option. Surrogacy is also a common option pursued when it comes to gender selection, as well as preimplantation genetic testing to prevent hereditary diseases, Fontes says.

It was four years after that episode of Murphy Brown aired that Fontes founded ConceiveAbilities, a Chicago-based agency that provides resources for egg donation, assists with matching parents with surrogates, and coordinates gestational surrogacy—which unlike traditional surrogacy creates no genetic link from surrogate mother to child.

“When I started ConceiveAbilities, egg donation was something that was just coming into its own as a commercial viability for intended parents,” Fontes recalls. “Before that period of time, it was relatively unknown, and it really wasn’t widely practiced in the field of infertility.”

Today, ConceiveAbilities has grown into one of the most renowned agencies for egg donation and surrogacy in the nation. Partnering with physicians and intended parents around the world in aiding in family reproduction, ConceiveAbilities has developed a high-quality reputation in the industry through client interaction, transparency, and its unique Matching Matters process. The program includes pre-screening surrogate candidates for both medical and psychological criteria, and all surrogates and egg donors are vetted with strict standards to increase the chances for an ideal match.

Through Match Matters, about 95 percent of intended parents are matched with the first surrogate presented. Engagement is also typically fifteen months, as opposed to 18–24 months or longer at other agencies, which is a credit to ConceiveAbilities’ combination of service and speed that give it an industry advantage—a key factor that clients look for when pursing an agency. That also removes any high risk elements of an unsecure match so that clients realize the family of their dreams in a little more than a year’s time.

But just as ConceiveAbilities has grown over the past two decades, so too has the construct of the contemporary family. What was once considered controversial after Murphy Brown raised a child as a single mother is now just one way families are shaped today. Surrogacy and egg donation are now deliberate choices by intended parents as a means for family creation.

Fontes says one of the primary catalysts for that change has been the wider acceptance of same-sex marriage in recent years, and she also points to the advent of social media and ubiquity of the internet as another reason for the culture shift in accepting surrogacy. Now, people can go online and see single mothers and fathers who intentionally chose to be single parents, as well as witness the success stories and joyful beginnings of real people who pursue these options.

“Focusing on the contemporary family is based on everything that has been evolving up to this moment in time, and it isn’t static.”

“Surrogacy and egg donation used to be the last resort option,” Fontes says. “Obviously, we help those who do find themselves at this juncture in their family building and this is sometimes the last resort as a medical treatment, but for others, it is more of a deliberate and cautious decision to build a family. It’s pursued with joy and excitement that we live in a time where this is possible.”

In an industry that deals with life itself, sensitivity and understanding are of the utmost importance. Fontes says families need to be confident that they are in the hands of a company that puts their interests first and offers the professional support to carry out the process. That process, according to Fontes, does not stop when a match is made for surrogacy. As a highly reputable and premier choice, ConceiveAbilities brings forth a team of experts—be it a medical team, legal team, counselors, therapists, insurance agents, and more—as support for the growing family.

Having that knowledgeable team is crucial when it comes to surrogacy because it is a deeply complex process. Fontes says that while there are many well-intentioned surrogacy advocates, there can also be a lack of oversight and expertise, which results in poor business practices that can create negative connotations for those pursing surrogacy as an option. It’s not only here where ConceiveAbilities has stood out as the gold standard in the industry as a company, but also where the team itself embraces core beliefs to lead with courage, boldness, and further build upon an acclaimed reputation.

While its headquarters may be in Chicago, ConceiveAbilities serves families from six continents with a core belief that all who have the desire to pursue a family, deserve a family, says Nazca Fontes.

Global demand for surrogacy and egg donation continue to rise in popularity as an option for intended parents, but international couples can face strict regulation due to laws and regulations. Additionally, Fontes says that ConceiveAbilities needs to be aware of cultural differences while still keeping the mission of the company top of mind.

“There’s a learning curve that goes along with understanding cultural differences, but when it comes to the deeply rooted desire to overcome any obstacle to have a family, there are universal understandings we all share,” Fontes explains. “We do have to flex and pivot often depending upon the cultural needs of our client base, but learning is part of what makes this work energizing and enlightening. We all gain a richer and deeper understanding of our global citizens when we embark together on something truly life changing.”

“It stems from my own upbringing and challenges I’ve had to face and overcome,” Fontes says. “It comes from facing the daily obstacles of moving a rapidly growing company forward. What I’ve found is that ConceiveAbilities tends to attract people with very similar, tenacious characteristics. It takes courage and strength to be an egg donor, a gestational surrogate, and an intended parent, and those qualities are ones that resonate deeply with this team. Many of us have been on that side of the equation and care deeply about the difference we are making, not just to the families we help grow but also on the social fabric we help to influence.”

Courage, along with boldness, directly correlate with ConceiveAbilities’ mission at larger: For the Pursuit of Family. Fontes says that a fertility patient used to only be a consumer of contemporary family building options such as egg donation, pre-implantation genetic testing, surrogacy, and more. Now, just as patients have become bolder and better informed as they pursue those options as choices, so too has ConceiveAbilities.

“It’s all about bold family choices, which break through traditional constructs of treatments that were once thought of a last resorts,” Fontes says.

While Fontes and ConceiveAbilities are leading the evolution that the writers of Murphy Brown helped inspire decades ago, there is still work to be done in changing the perception of what is considered the contemporary family, especially when it comes to societal judgment of women’s reproductive choices. Women now have the ability to exercise choices not only when, but in how they can build their family. With or without a partner, surrogacy now supplements in-vitro fertilization (IVF), egg freezing, sperm donation, and egg donation, which creates control for people when it comes to timing opportunities rather than pursuing various technologies that were once considered a last resort.

“I think traditionally we’re supposed to want to carry our own children, we’re supposed to want to enter into the traditional construct of family, but life unfolds in a variety of ways, at different times for different people,” Fontes says. “Where there was once no altering the biological destiny of parenthood, and motherhood, in particular, we now have the ability to face different paths of well-thought-out choices on one’s personal and professional situation in life.”

A Closer Look at US Provisional Birth Rates

The provisional number of births for the United States in 2017 was about 3.8 million, which is down 2 percent from 2016 and the lowest number in thirty years, according to a recent report from the Centers for Disease Control and Prevention (CDC).

Additionally, the general fertility rate was roughly sixty births per one thousand women aged 15–44, which is down 3 percent from 2016 and is another record low in the United States, according to the CDC’s report.