Karen Walker shares how a strong culture, continuous innovation, and a passion for the company’s mission have kept Pandora Media at the forefront of the music industry

Few devices capture the essence of innovation quite like the radio. A technological phenomenon that symbolized the turn of the nineteenth century, it served as the precursor to television with broadcasts of Sherlock Holmes, Green Hornet, and the Glenn Miller Show. But eventually, these programs were replaced by television, and the radio became primarily a way to transmit music. This history is one reason why Pandora was a revolutionary company when it was founded in the early 2000s, points out Karen Walker, vice president and chief accounting officer of Pandora Media Inc. Not since the invention of the radio itself had a company changed the way consumers could discover and access music, not to mention customize their own radio stations. Setting up The Strokes radio station could introduce you to similar songs using the company’s proprietary algorithm, leading to The Vines, Franz Ferdinand, and more previously unknown artists.

More recently, Pandora has evolved its product beyond personalized radio and now provides a three-tiered offering (ad-supported radio, Pandora Plus, and Pandora Premium) with the ability to search and play any song, create playlists, and download music for offline listening.

Thanks to these innovations, Pandora has inspired a plethora of competition from other streaming services, but Walker and her team welcome it.

“I get inspired by the mission and the people I’m working with,” Walker says. “I love consumer businesses where disruption is the common denominator. It’s fun, inspiring, and very powerful, and I’ve been fortunate enough to be part of several well-known disruptors, including Pandora.”

That’s one of many reasons why Walker joined Pandora, now the largest streaming service in the United States. Walker says that “Pandora is well positioned to continue to disrupt the terrestrial radio market with its personalized offering, non-music content, and in-app voice activation.”

Walker is most excited about podcasts. “It’s a big market right now, but we think it can be much bigger because it’s very difficult for people to discover podcasts,” she says. “We want to work to personalize it and help content owners monetize it. Similar to our music genome—with our proprietary algorithm you can discover music—we’re looking to do that with podcasts as well.”

Walker joined Pandora in 2017 with extensive experience in other media companies—including  CNET Networks and CBS Interactive. “My past media experience provided a really strong foundation for me and allowed me to hit the ground running,” she says.

Since then, Walker has been focused on transforming her team, scaling the operation, and freeing up capacity for business partnering. Having joined organizations as varying stages of maturity, Walker has built teams from the ground up but also stepped into more established teams. “When I join an organization and the team is largely built, I spend a lot of time talking to as many people as I can within the company to understand what is working well and what’s not working well,” she says. “I also try to understand the personal and professional goals of my team. By understanding their aspirations, I can better understand how to create a vision and be an inspiring leader.”

Walker’s ability to maximize her teams has been evident throughout her career. “Having worked with Karen over the years, I have always seen her embrace new challenges. She has built teams from the ground up and or enhanced existing ones passionately and sensitively,” says Anurag Saha, a partner at PwC.

Walker says one of the major changes she and her team are pursuing is pioneering transformation in the way her team works, mainly by leveraging technology and focusing on constant improvement. “By transforming the way we work, we are not only creating operating leverage for the company, but we are also freeing up capacity to be better business partners,” Walker says. Now, Walker’s team is in the early stages of several new programs.

This year, Walker and her team started looking into the use of robotics process automation (RPA) to automate routine tasks. “Initially I was looking to leverage IT automation for manual work, but we had some constraints in terms of prioritization, and so I started to think through other ways we could achieve some quick wins. RPA seemed like a great way to do exactly that.”

What was unexpected for Walker is how quickly the potential of RPA was being embraced by her team. “An early narrative came from the feedback I initially received when I joined, which was that we did not have strong tools and some of the work seemed routine, mundane,” she says. “Teams always want to minimize the routine and work on more compelling and analytical projects. Similar to the way our business is continuing to leverage data insights to deliver great products, we in finance need to approach our delivery model in the same way.”

“Although it is early days, I can see the potential for machine learning and artificial intelligence in our world,” Walker continues. That can lead to greater efficiency and ultimately higher employee retention. On the commercial side, Pandora is seeing ways to leverage artificial intelligence to better serve its listeners, including in-app voice controls and integrations with voice-activated devices. Teaming up with Sonos, the wireless home sound system, listeners can control their music on Sonos within Pandora’s mobile app with voice commands via Amazon’s Alexa. 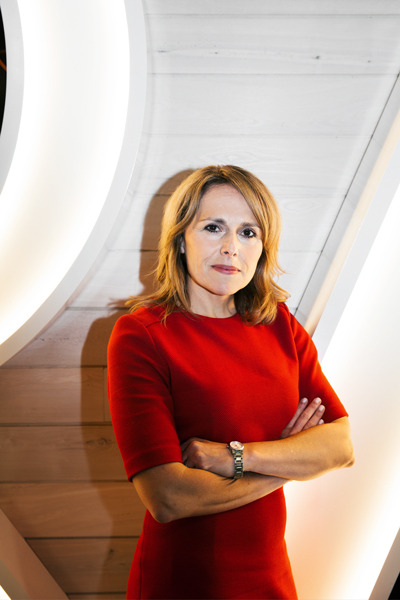 Venturing into these new strategies is exciting for Pandora, but it is not without challenges. That’s why Walker is quick to compliment the teams at Pandora and its culture of collaboration as a pivotal reason why the company has remained at the forefront in the music streaming industry.

“People are passionate about what we’re doing at Pandora, and since I’ve been here, that’s actually the number one thing I see in so many people across the organization,” she says. “People are very excited about our mission, what we do, and how we go about doing it. One of our core values is ‘I got you,’ and that’s really about succeeding as a team. It means everyone’s views are valued and everyone’s voice is heard. And I think that’s very powerful and, quite frankly, how Pandora grew up from the start.”

No matter how fierce the competition gets, Walker and her team are fueled just as much by their passion for the company as they are for the technology that is keeping them at the forefront.

“I enjoy the space, and I think we’ve really just scratched the surface on what we can do,” Walker says. “With that and the combination of a great culture, I think we are poised for success.”

Off the Clock with Karen Walker

Outside of her work with Pandora Media, Karen Walker works passionately to help find a cure for  ALS (amyotrophic lateral sclerosis), an always-fatal neurodegenerative disease. As a member of the board of directors for the ALS Association Golden West Chapter, Walker says the goal of the organization—to lead the fight to treat and cure ALS through global collaborative research and nationwide patient care and advocacy—is quite personal.

“I lost my mom to ALS. She was first diagnosed at the age of fifty-five, and she passed away four years later,” Walker says. “Afterwards, I never imagined I would doing anything other than write checks for the cause. Dealing with ALS is devastating and isolating—but in recent years, I have come around to the community, and I’m glad I did.”

Walker began by volunteering about five years ago, eventually becoming part of the community and leading fundraising events before joining the board. One of the fundraisers she now helps organize includes an annual bike ride in Napa Valley. As the anchor fundraiser for the chapter, the event hosts more than one thousand riders and has raised roughly $6 million since inception.

“It’s a very personal fight,” she says. “Sometimes it’s difficult for me to renew my commitment each year, but I like to think I’m my mother’s daughter, so I keep on fighting just as she did.

Duff & Phelps is the global advisor that protects, restores and maximizes value for clients in the areas of valuation, corporate finance, investigations, disputes, cybersecurity, compliance and regulatory matters, and other governance-related issues. We are proud to recognize Karen Walker on her accomplishments and contributions to the business community.