At St. John Knits, Christina Zabat-Fran combines her legal experience with her ability to bring leaders together to help the business thrive

Christina Zabat-Fran defies legal stereotypes. As the chief legal officer for iconic luxury women’s wear company St. John Knits, she shapes her department around what fits the company’s business and the industry—and she isn’t afraid to venture outside the role of an attorney to accomplish that.

“What I find with business leaders, is that they’ve all come to the table with their own experience of what a lawyer is,” Zabat-Fran says. “Whether that was a good experience or a bad one, or whether they’ve only watched lawyers on TV (the Law & Order type),” her role, she says, is to show those same business leaders that her work can help execute their visions in a variety of ways that they probably haven’t even considered.

St. John Knits is a legacy brand with a complex business history. Founded in 1962 by husband-and-wife team Marie St. John and Robert Gray, the company has changed hands, from private to public, and recently, in 1999, going private again and bringing back founding family members as creative consultants.

When Zabat-Fran joined the company in 2010, it had a legal department that was shaped alongside the changing demands of the company’s ownership and the retail space over the years. There was a lot of opportunity to bring a fresh perspective to how they should operate.

“It’s been a very important time for us to look at our current structure and ask: What are we doing? Does it make sense? Is it something that’s built over time organically?” Zabat-Fran says. “There was a directive at the board level. They said, ‘If you got out a blank piece of paper right now, how would you build this company? What would it look like?’ Then you compare that to what we currently have in hand, and ask, are there bridges to get there?”

Zabat-Fran asked those questions of her legal department and determined that they could operate more efficiently while also sharing information in a more systematic way. Previously, the legal department had attorneys assigned to specific subject areas, which would sometimes result in one attorney being overwhelmed while another had a lighter workload.

“I wanted to look at how we function, how we share information, manage products, and how do we make it easier for one person to pick up where someone left off,” Zabat-Fran says. “Or, how do we structure the way we communicate in our meetings, so that something I’m learning with the sales team can inform our other attorney with the project she’s working on that’s addressing back-end processes?” 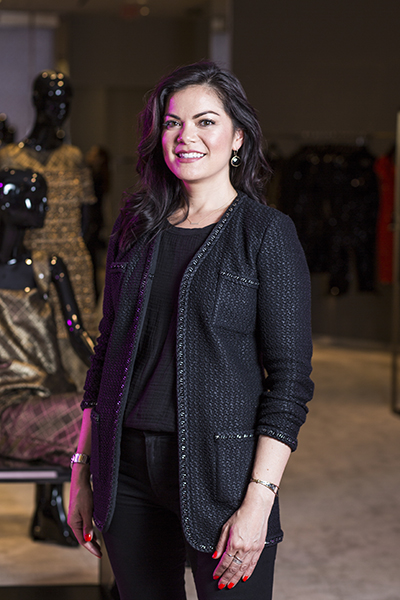 How legal serves the C-suite

Zabat-Fran also ensures that the legal department sets its priorities based on the company’s priorities and what the rest of the C-suite needs. Every Monday, her team—which includes the general counsel, a director of legal affairs, a paralegal, and a legal assistant—meets to discuss what’s happening in the company and how they can contribute. St. John Knits is a vertically integrated manufacturer, which means that every function of the business, from design to production to marketing, operates out of the Irvine, California, headquarters. That setup creates unique opportunities for the legal team, and every week presents new challenges.

“Maybe we have Nordstrom here for a buying session across the way. Maybe we’re currently designing the fall line in the design studio. We’re going through some safety audits with our manufacturing teams, to make sure everyone is supported and feeling comfortable,” Zabat-Fran says. “I encourage my team to get up and confer with other employees, and walk around as much as possible so that we’re present, we’re there, and we really know what’s happening.”

Being present throughout the company extends to the retail stores, and also into new ways that the company is reaching its core customer base online. Where some might expect that the legal team would just be “papering the deal,” Zabat-Fran says that they’ve been involved from the start as St. John Knits develops an omnichannel retail experience. Making their clothing available online is an important move, but must be undertaken carefully for a legacy brand with a reputation for quality and authenticity to uphold.

“I walk through our factory on the way to my office every day, and there’s such a wonderful sense of pride and ownership here. And it’s important that we communicate that to our customers,” Zabat-Fran says. “We’re a retailer, but we’re also a manufacturer: we carefully twist our yarn, dye it, and knit it. We’ve made a lot of these beautiful dresses and iconic jackets from scratch.” 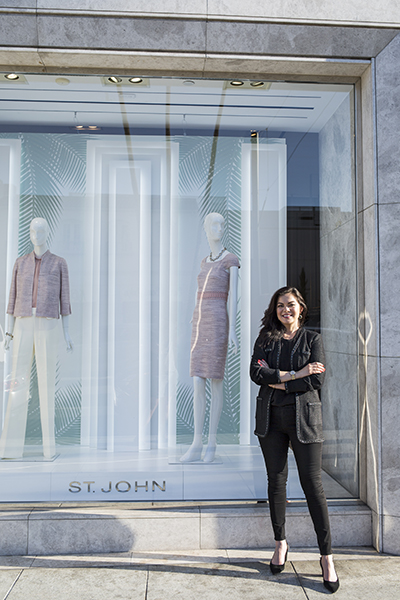 Why details matter in legal leadership

That attention to the entire product life cycle is the same attention Zabat-Fran brings to her work with the rest of the leadership team at the company. She sometimes draws from her experience before law school working as a chief of staff for elected officials, a job that requires a lot of planning ahead balanced with the ability to put out fires as they spring up.

“I think it’s really important to show that as a general counsel you’re a true partner with the business, not just a flagger of issues or a cost center, but a really inclusive leader,” she says. To do that well, she adds, requires a lot of listening and ensuring that all the voices on a team are heard. Zabat-Fran also injects a lot of positivity into her day-to-day interactions. She doesn’t shy away from criticism and holds her team to high standards. But she is also quick to point out when someone—from one of her legal interns to the COO—does something right.

“This isn’t positivity just for positivity’s sake, but telling people when they’re doing something right will stick with them. I think it’s a great motivator,” she says.

Connecting to people is the common thread of how Zabat-Fran approaches her work. She says that networking gets a bad rap, but there’s a huge benefit in forming intentional connections. “Building meaningful, strong relationships has helped me be a better connector for people, be of better service, help them get to where they want to go,” she says. “It’s building that community, who they know and what they do, and it’s really resulted in some fantastic things.”

One of the ways Christina Zabat-Fran keeps her approach to legal work fresh is by stretching her brain in creative pursuits. She’s an artist, a classically trained pianist, and has a black belt in taekwondo. In college at the University of California–Irvine, she managed the art studio, and she learned how creating art often comes down to problem-solving.

“There would be artists who say they want to make this gigantic sculpture out of lead and hang it from the ceiling. Or they want to cast their head out of cheese—that actually happened, a girl made a cast out of cheddar cheese,” Zabat-Fran says. “But with whatever creative, fascinating iterations, what I learned is it’s not about the idea, it’s about making it. Anyone can say, ‘I want to make something beautiful.’ But actually making it is another thing.”

As a visual artist herself, Zabat-Fran has a deeper appreciation for what the creative teams at St. John Knits do, which motivates her to solve problems for them so that they can focus on the creative aspects of the work.

Greenberg Gross LLP worked closely with St. John General Counsel Christina Zabat-Fran on complex litigation that was favorably resolved.  From there, the relationship evolved beyond the suit to include advising the company on a myriad of important issues.  “Through litigation, we gained a deep understanding of not only the operations of the company but also the goals of senior management, which enables us to continually assist the company in every possible way,” explained Greenberg Gross partner Evan Borges.  “The firm has become my trusted advisor on critical corporate issues,” said Christina Zabat-Fran.

Jackson Lewis P.C. values our relationship with Christina Zabat-Fran, and we congratulate her on her well-deserved recognition.  We are proud to be of service to St. John Knits for their employment needs.  Like St. John Knits, Jackson Lewis has built its reputation by providing excellent service to our clients.

The Blueprint for Employee & Patient Care

“The best way to predict your future is to create it”