Women are underrepresented at every level in corporate America. Leaders across the nation hope to change that statistic through new initiatives and disrupting preconceived mind-sets.

Women make up a majority of the US population. They earn roughly 60 percent of undergraduate degrees, 60 percent of all master’s degrees, and nearly 50 percent of all law degrees and medical degrees. Yet women remain underrepresented at every level of corporate America, from entry-level positions to the C-suite. 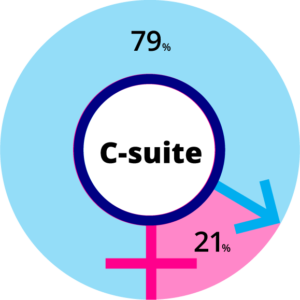 Last year, just 21 percent of women held C-suite level positions compared to 79 percent of men. Not surprising when women remain significantly underrepresented in the corporate pipeline. At the entry level, women made up 48 percent of those positions. At each ascending step of the corporate ladder, the pace of men outnumbering women grows exponentially.

“There is a common argument that diversity hiring is difficult because there is a supply issue. But that’s not true. It’s a demand issue,” explains Teresa Tanner, chief administrative officer for Fifth Third Bank.

Tanner and other executives across the US business landscape are not only incorporating more initiatives to help women develop into leadership roles, but they’re also helping to change a preconceived notion about women in the workplace contrived decades ago.

Tanner says that when she came to Fifth Third more than a decade ago, the company did not have a particularly diverse workforce, especially when it came to women in leadership positions.

Efforts such as this—along with the internal women’s business resource groups, intentional job rotations, and increased public awareness—have resulted in women now making up about one-third of Fifth Third’s board of directors, including its chairwoman, Marsha Williams.

“The way to get better and more diverse outcomes is to demand them,” Tanner says. “To be the most attractive place for everyone to work, we have to clearly communicate that we welcome and promote diverse candidates.”

Strong initiatives alone will not narrow the leadership gap for women. Instead, there needs to be a commitment from everyone to enable opportunities for inclusion.

Keith Krach, chairman and former CEO of DocuSign, says women are among the most underutilized members of our global workforce, and the tide needs to change.

“We need more role models, more mentors. It’s happening, but we need more women on corporate boards,” Krach says. “When I see the leadership exhibited by great women like Ginni Rometty at IBM, Mary Barra at my old alma mater, General Motors, Ruth Porat at Alphabet, Amy Banse at Comcast, and Meg Whitman at HP, you can see it’s happening. I believe we need to accelerate that trend and remember diversity-of-thought is the catalyst for genius.”

Part of that leadership gap as well is the lingering persistence of preconceived gender stereotypes. Tanner has firsthand experience with navigating the twists and turns that come with gender issues in the workplace and the broader society. Her husband retired when their children were young so he could stay home and she could continue her career. The fact that his decision hasn’t been as socially acceptable as she would like indicates that those stereotypes are still prevalent.

“There are still too many questions we ask women at work that we don’t ask men—like if they can handle a promotion with small children at home,” Tanner says. “We need to have the hard conversations and take steps that grow out of them to create a work environment where everyone brings their best selves to work and that leverages the best they have to give.”

Women are less likely to receive advice from managers and senior leaders on how to advance, and employees who do are more likely to say they’ve been promoted in the last two years, according to the Women in the Workplace report.

Laurie Krebs, global vice president of tax for Red Hat, says that in her previous tenure at Nortel, there was no mentorship program at the time, so they started one. Lower-level female employees were matched with upper-level male and female managers, and the lower-level employee created agendas for one-on-one meetings with their mentors.

The group also brought people in to speak on women’s issues, including empowerment, and also had other influential women in the community to speak on their careers.

“This group, which grew to more than 250 women, enabled women in finance to network with women in engineering, legal, sales, and more,” Krebs says. “What we found was that no matter what anybody’s job was, we were all having the same experiences as women.”

Having joined Red Hat in 2017, Krebs says she was fortunate to be part of a company that not only favored the idea of a women’s group, but also encouraged and celebrated it. The company’s finance department employed more than four hundred people, and half of these employees were women. Krebs told the group about what she had done at Nortel, and other women leaders in finance joined in to share experiences as well.

As these leaders explain, changing the tide is a responsibility that every leader must share, and only their collective efforts will narrow the gap for women in leadership positions.

“Creating paths for women to reach top leadership positions is a responsibility all of us share,” Tanner says. “We can and should do more.”

Get the FREE Talent Report

An Appetite for Impact