DocuSign’s chairman/former CEO shares the importance of transformational change, as well as what’s next for him after DocuSign’s recent initial public offering

It’s fair to say Keith Krach doesn’t just thrive in change—he prefers it. From being recognized as an early pioneer in the robotics industry, to revolutionizing engineering automation and creating business-to-business e-commerce at Ariba, to helping the world go paperless with DocuSign, to bringing about a massive paradigm shift in higher education, there is little this transformational leader hasn’t directly influenced.

Three of his companies have gone public, including DocuSign this year. Krach is now using his transformational leadership, strategy, and expertise to help mentor a new generation of entrepreneurs and business leaders.

Krach spoke with Profile about the value of transformational leadership, the changing global landscape, and the importance of empowering women. 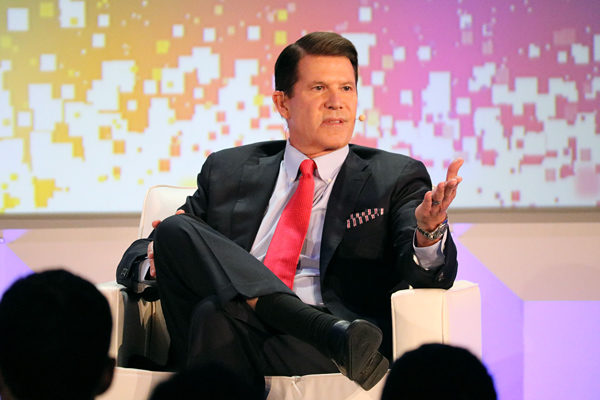 It seems like your entire career has been about global transformational leadership. What do you believe makes transformation so important, and why do you think you’ve been able to play such an important role?

The only way I’ve been able to make transformation happen is by surrounding myself with people who are smarter than me and building high-performance teams. I think that’s the secret sauce. You have to ensure that team includes different temperaments, talents, and convictions. I think diversity-of-thought is the catalyst for genius and is absolutely essential for building a high-performance team.

There’s a tremendous amount of discussion today about the rise of transformational technologies like robots and artificial intelligence, and there’s concern about what that will mean in terms of job loss and living standards for workers. What do you believe could be done to make sure that transformation is good for everyone?

I think a very important way to make transformation work for everyone is to make sure we apply those technologies in basic industries to make us more competitive. We need to make sure we don’t give up a lot of our traditional manufacturing industries to overseas operations. I also think it comes back to education—retooling the workforce. You’re never too old to learn, but we have to make education accessible to everybody and drive down the cost of tuition. I think a public/private partnership can help make that happen. It’s also useful to see some of the things that Purdue University Global is doing, using their online learning to retool the workforce around the world. Much more of that needs to be done, as well as making sure we’re enabling of the entire workforce, particularly women, and in STEM education as well.

There’s also a tremendous amount of attention being focused on the competitive position of China relative to the leading economies of the free world. What do you think we need to do to build and maintain that competitive leadership in the world?

Many countries—not just the US—have been great innovators. We have a very serious competitor that threatens the free world today—China. For us, and for every country, I think the rate of adoption and investment in digital transformation is one of the most critical factors driving innovation and productivity. And speed is the ultimate currency. It’s absolutely essential that we pick up the pace of innovation. To simplify, let’s look at it in four major buckets.

First are our traditional allies who have been great economic partners. Think of Germany, France, and Japan. These countries have long been the leaders in using national industrial policy and investment to gain competitive advantage. I believe their increasing investment in digital and artificial intelligence technologies will continue to present a great opportunity for American companies and vice versa.

Second are our allies in emerging economies, like South Korea, India, and Singapore. One of their advantages is that they’re not weighed down by large existing investments in antiquated systems and infrastructure. They’re free to start with a relatively clean slate and invest heavily in new digital technologies. These countries have the agility to leapfrog much of the legacy infrastructure and processes we rely on in the United States.

Third are our fellow Anglosphere nations who are not only great economic partners but also great strategic partners, especially during times of war and global confrontation. It is important that we don’t take the UK, Australia, New Zealand, and Canada for granted and realize, for example, that Australia’s trade with China dwarfs that of Australia’s trade with the US. However, our direct investment and our hi-tech industry play an important strategic role in their economy.

Finally, there’s China. China’s growth is unprecedented and threatens the competitiveness of the United States and our allies, and the international security and global benefits that come from our leadership. If you wanted to run a country like a company, you would run it like China Inc. But personally, I like my individual freedoms, and I think that it’s very important for us to ally.

We have to partner with our strong allies like Canada, Japan, Australia, New Zealand, Singapore, South Korea, India, Germany, France, and the UK—basically Western Europe, as well as our Latin American neighbors because China is coming at us full force. Many times, they don’t play fair—particularly in terms of intellectual property. At the same time, they’re a huge trading partner, so we have to figure out ways to cooperate in an equitable fashion, and I think that’s where some of the challenges lie.

We need to move with lightning speed to capitalize on the opportunities that the digital economy presents. The surest way to retain our leadership, safeguard key alliances, and outpace the competition is to accelerate our adoption of digital technologies.

What do you believe about empowering women as entrepreneurs, and why is that so important for our economy and the world at large?

My mother always said the hand that rocks the cradle rules the world, and my mother is probably one of the boldest leaders I know. My sister was chief engineer of Fox TV. My wife was a senior corporate counsel at the GAP. My oldest daughter is a top marine biologist in California. Despite that, I believe women are among the most underutilized members of our global workforce. We need more role models, more mentors. It’s happening, but we need more women on corporate boards. When I see the leadership exhibited by great women like Ginni Rometty at IBM, Mary Barra at my old alma mater, General Motors, Ruth Porat at Alphabet, Amy Banse at Comcast, and Meg Whitman at HP, you can see it’s happening. I believe we need to accelerate that trend and remember diversity-of-thought is the catalyst for genius.

Since your success in transforming business, education, and in leadership, what are you focused on right now?

At this stage of my life, I’m really focused on the next generation of leaders, on those people who are looking for a change. They’re at an inflection point in their life, and my hope is that I can give them courage, inspiration, and maybe a few how-to’s from some of my victories and lessons from a lot of my defeats. I think it’s important to talk about your failures, your fears, and your flaws. That’s really my hope—to inspire in that way and actually to do it at scale.

I’m a big believer in mentorship. I’ve benefited from it my entire life. So now we’ve created the Virtual Mentor Network, which allows for the first time ever mentoring at scale with some incredible people like General Stanley McChrystal, Dan Goldin—who was the director of NASA—and Michael Brown, who’s one of the most epic social entrepreneurs in the United States, so that people have the benefit of all their wisdom, because I think the most important things in life are not written in a book.

If you had to measure your life with tangible business metrics, which would you choose?

I think I would measure my own performance by the standard of living of other people because I’ve always focused on value creation. Whether that is in factory automation, office automation, cascading leadership principles, or education, I think it all drives to improving people’s standard of living. That’s pretty hardcore I think, but I think at the end of the day, even commerce, creating the category of business-to-business electronic commerce, it’s about increasing the standard of living around the world. Same with robots, digital transaction management, engineering, automation, all of it.

But if you take the business metrics out, I think my ultimate legacy, of course, is my family, my friends, people I’ve mentored, and people who’ve mentored me. I’m a people collector and a student of human nature, so I think that at the end of the day, how I live my life with a true north, that will be my legacy.

Businessman, entrepreneur and philanthropist Keith Krach is a model Purdue Boilermaker. Using innovative, next-level strategies, he has made countless leaps in addressing globally significant problems. And while engaged in an ambitious business career, he consistently supports promising Purdue students who want to follow in his footsteps.

How Fuyao Glass Successfully Launched in the US

Amber Kennelly on the Reason to Come to Work