About 70 percent of Xavi Cortadellas’s day-to-day at Gatorade is focused on innovation—a big commitment to the future for a company that has plenty going on in the present. As a division of PepsiCo, Gatorade must juggle numerous systems, countless processes, hundreds of people, and the constant need to stay ahead in the competitive digital age.

The company has come a long way since its sports fuel drink was first formulated in the 1960s to keep the Florida Gators football players properly hydrated. Gatorade has since become a cornerstone in the world of sports, from iconic endorsements to supporting professional teams in every league.

As the global head of innovation and design, Cortadellas drives his team to think beyond what’s happening today to innovate for what’s possible tomorrow. That mind-set is what led them toward the sports trend of personalization—in training programs, equipment, nutrition, etc. By thinking about how Gatorade could complement its product with new services, Cortadellas and the team have developed a new integrated platform, Gatorade GX.

Combining science and technology, Gatorade GX, which will be released soon to the general public, is a real-time hydration platform that provides athletes and consumers instant feedback on hydration, fluid intake, and fluid balance to meet their specific needs.

But as Cortadellas recently shared at an OpenWork talk in Chicago, his playbook for innovation isn’t exclusive to Gatorade. There are five steps that can be shared by employees at any company in any stage of product development.

“It’s super important to know what you’re trying to achieve,” Cortadellas says. “If you struggle, go back to the vision. I said, ‘What was the original problem? What we are trying to solve?’ That’s your North Star.”

For the GX platform, Cortadellas and his team wanted to leverage technology, but as he explains, technology for the sake of technology is not useful. Sometimes, there is no need to innovate when analog methods work perfectly fine.

“You need to be very strategic of where you need technology and where technology adds value,” he says. “When the current process based on pen and paper works well, don’t touch it.”

As Cortadellas has learned since initiating GX, building a cross-functional team has been essential, as in the past four years they’ve combined everyone from internal and agency teams to R&D.

“If you have this group of believers, then you could achieve great things,” he says. “One of my colleagues on the design team in New York said, ‘You don’t have a team. You have a tribe.’”

Cortadellas and his team took that to heart for GX, as they literally sweat to meet their objectives. They spent time on the soccer field doing sweat tests to see how their hydration levels measured on the platform and celebrated victories together as they continued to achieve breakthrough results.

“Still today, my team is doing most of the sweat testing that we do in the lab,” Cortadellas says. “We start applying all the new technologies and all the new ideas on ourselves and see how it works. That’s sweating the details.”

Cortadellas says that many consumer packaged goods companies favor testing, but the problem with running tests is that they’re pass or fail. Instead of testing, companies should pilot programs because it allows teams to approach a project a different way.

Sometimes, the pilot doesn’t go as planned and the team’s initial hypotheses do not work, but it’s about taking those lessons back to the drawing board and then reiterating.

“The value of piloting is also to figure out the real value proposition for consumers,” he says. “In this case, talking about sports fuel personalization, we learned that when we talked with high school kids about sports fuel personalization, what the kids said was, ‘What I want is my bottle. Design the bottle and put the name on it. Don’t complicate my life with multiple formulas. That’s not for me.’”

On the other hand, professional athletes, the team discovered, don’t care about fancy bottles; they only care that the formulas are calibrated for them and that they work. Two different groups showed different results, so the team was able to pivot and figure out how they could serve both groups. 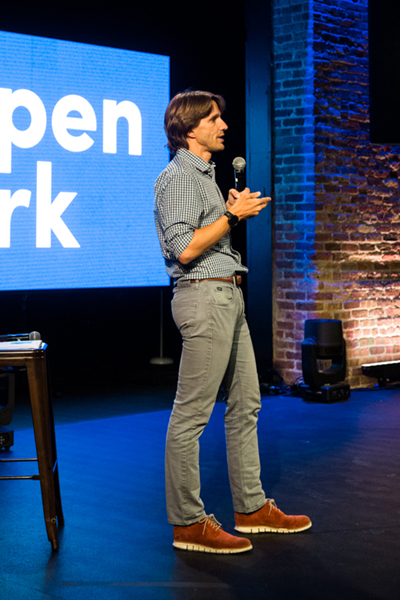 Celebrating may seem premature when the innovation process can take months, even years. But Cortadellas stresses that celebrating wins along the way is crucial.

When Gatorade partnered with the Brazil national football team to first pilot Gatorade GX, several of Gatorade’s teams, including R&D, were able to see the product in action firsthand, which built excitement around what the platform could achieve.

“We were able to rollout the platform to multiple teams across multiple sports,” Cortadellas says. “This is still not commercial, but we had a platform that professional teams were willing to use and we were able to explain this story.” They were far from finished with their project, but they stopped to appreciate the success they were seeing in this first pilot.

In any innovation project, the obstacles are huge, Cortadellas says. The only way to achieve progress is to divide those big assignments into smaller problems and solve one at a time.

“Sometimes, you see this mountain and it’s impossible to climb. Go one step at a time, one problem at a time, and then when the next problem comes say, ‘OK, I’ve solved all the other ones, so bring it on. We’ll solve it,’” he says. “There is always a solution. There is always a turnaround.”

When visiting the problem of consumers wanting to personalize their Gatorade bottle, the company was told by its manufactures in China that it would be impossible. To overcome it, Gatorade brought some of the production to the United States, where the caps of the bottles could be personalized with laser printing.

“It’s just an example that’s something that seemed completely impossible, completely out of scope, if you ask the right questions and you push the right buttons, then it’s possible to do it,” he says.

These five steps are the blueprint that Cortadellas emphasizes could be applied to any company. Gatorade is a brand rich in history that is now looking to disrupt the sports fuel industry not only with new technology of its own, but also with expanding its portfolio for e-commerce.

“We believe that as a brand, with all the legacy that we have and leverage with new technology, that we have proved to ourselves that we could do much more than a sports drink,” he says. “I will say this is just the beginning.”

Sign up for our biweekly Insight newsletter, and you’ll get our FREE 11-page Talent Strategy Report along with more actionable takeaways from executives like Xavi Cortadellas.

Get the FREE Talent Report