Frank Nguyen protects Intuitive Surgical’s intellectual property, which is extending the limits of what is possible in surgery. 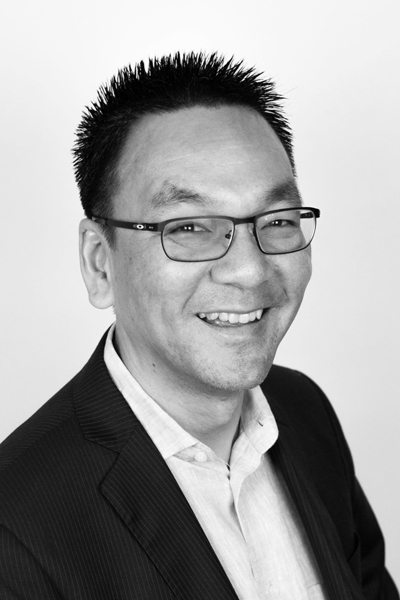 A surgeon sits behind a console that projects a 3-D image of a patient’s anatomy as they lie sedated on the operating table. During surgery, the surgeon meticulously maneuvers two controls on a console that causes corresponding movements from instruments attached to robotic arms that will be used to perform minimally invasive surgery on difficult-to-reach anatomy.  The image is so clear and the instrument‘s movement so precise that the doctor is able to complete the surgery with minimal incisions and little blood loss or damage to the surrounding muscle or tissue, all while seated at the console.

To some, this might sound like science fiction. To Frank Nguyen, it’s the cutting edge of surgery. Nguyen is the vice president of intellectual property (IP) and licensing for Intuitive Surgical. The company is pioneering the field of robotic-assisted surgery and bringing revolutionary technology to operating rooms around the world.

For the past thirteen years, Nguyen has led the effort to improve the company’s already impressive technology. He does this by expanding the company’s IP portfolio. Under his leadership, the company’s patent portfolio has grown from about 200 to about 4,500 patents and patent applications worldwide.

How to Grow an IP Portfolio

Building an IP portfolio involves an unwavering commitment throughout the company, from executive management to inventor-engineers. It requires effective management of financial resources and the commitment of inventor-engineers who are willing to go above and beyond their normal workload. Having a robust and meaningful IP portfolio is vital to protecting the company’s technology, which, in turn, impacts the company’s value.

Intuitive Surgical’s strategy for expanding its portfolio involves generating patents internally. It also involves  acquiring and licensing patents and other IP from outside sources. This places a heavy burden on Nguyen’s team because, in addition to performing traditional patent prosecution work, the team is also needed to identify and evaluate promising new technology, as well as to negotiate and draft relevant legal agreements. As a result, Nguyen has assembled a highly skilled team of lawyers that can do a little bit of everything.

“A patent attorney should do more than just prosecute patents,” Nguyen says. “We expect everybody that comes in to not only do patent prosecution, but also acquisitions, as well as a variety of other legal assignments.”

Being a Business Partner

This has allowed Intuitive to maintain an efficient, cost-effective department. For a company with nearly $3 billion in revenue, Intuitive has a surprisingly small IP team. Nguyen’s team comprises five IP lawyers and three support staff; many businesses of comparable size have teams several times as large. Nguyen’s team reflects the company culture at Intuitive. And he notes that effective management of efficient teams has been a hallmark of the company throughout his tenure.

Another critical component of Nguyen’s successful IP strategy is ensuring that Intuitive’s legal department is viewed as a business partner. This means providing ethical and legally compliant paths to successful execution of business opportunities. “You have to provide a reasonable solution that moves the business strategy forward, adds value, and achieves company goals,” Nguyen says.

Nguyen has also parlayed this approach into a close and collaborative relationship with the business development team at Intuitive. “My business development colleagues and I have a great working relationship,” he says. “Everything we do is collaborative. We’re always asking: ‘How should we structure this deal? How can we solve this problem together?’”

This fine-tuned approach will also continue to pay dividends in the operating room. “The company is currently working on innovations that will make its products even more effective,” Nguyen says. “These new capabilities will enable surgeons to do things that we can’t even imagine right now.”

Many people only experience war through their TV screens or newspapers. But in 1975, at the age of twelve, Frank Nguyen and his family were airlifted out of Saigon—now Ho Chi Minh City—to come to the United States. The family was evacuated overnight with only $100 in their pockets as the Vietnam War was coming to a close.

After bouncing around a series of refugee camps, Nguyen’s family settled in Hayward, California to begin their life in a new country. Eventually, he graduated with a mechanical engineering degree from the University of California, Berkeley, and later received an electrical engineering graduate degree from the University of Southern California before attending law school at Santa Clara University. Looking back now, Nguyen never would have imagined a career trajectory like his would be possible.

“Education and discipline are two things I think my parents and my culture helped me with,” Nguyen says. “But the United States provided boundless opportunities.”

Haynes and Boone, LLP is an international corporate law firm with offices in Texas, New York, California, Chicago, Denver, Washington, DC, London, Mexico City, and Shanghai, providing a full spectrum of legal services in technology, financial services, energy, and private equity. With more than 575 lawyers, Haynes and Boone is ranked among the largest law firms in the nation by The National Law Journal.