Adam Reed sets a high bar for the policies, procedures, and collaboration that will help lead Acrisure’s continued growth

Adam Reed is a self-proclaimed insurance geek. Ever since he began working for AIG after college, Reed has been fascinated by every aspect of the insurance industry. And he’s been driven to excel at the highest levels.

“I had never even seen an auto policy until I started working at AIG,” Reed says. “Right from the start, I saw every part of the business. I saw how the company created and sold policies. I saw the claims processes and all of the other backroom operations.  They were all pieces of an incredibly complex puzzle that have to work together.” 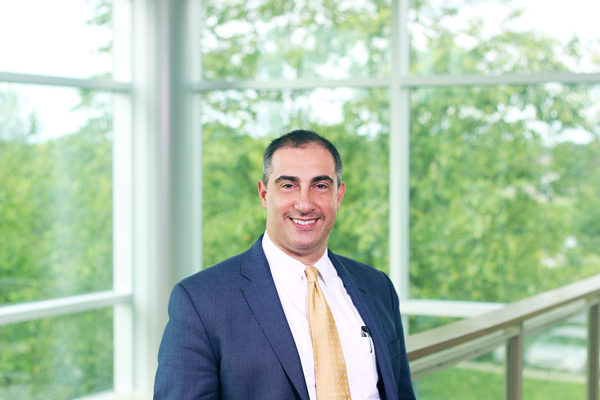 “Nobody has all of the answers, so I want people around me who know more than I do. My job is to bring it all together.”

Now, more than two decades later, Reed is general counsel for Acrisure. His expertise, insights, and comprehensive insurance and legal experience are helping him guide the company through its ongoing growth and expansion. The national brokerage firm, which had operations in thirty states, went from about 800 employees and $38 million in revenue in 2013 to approximately 3,500 employees and approximately $1 billion by the middle of 2017. Its aggressive growth initiative has resulted in an unprecedented number of acquisitions, including the nineteen deals that closed in July of 2017.

When Reed joined Acrisure in September 2016, his initial portfolio was the legal, compliance, and regulatory department. Since then, his responsibilities have expanded to include leading the human resources, risk management, facilities, and administration teams.

“We can’t think about things the same way we did when we were a smaller company,” he says. “That’s especially true of how we think about leadership, infrastructure, policies, and procedures. We must continue to question how we do things and always challenge ourselves to improve. That’s how we can keep providing exemplary customer service to both our internal and external clients.”

Learning from Mentors in the Insurance Industry

To accomplish his goal of developing best-in-class teams, practices, and services in all departments, Reed has gone back to a lesson he learned from Sherm Sitrin, his long-time mentor at AIG. Sitrin taught him to gather as much information as possible from as many sources as possible. “Never be afraid of having too much data,” he said. At Acrisure, Reed has implemented that approach by bringing everyone to the table, asking lots of questions, and empowering staff to answer honestly. This has led to candid assessments of current practices and challenges, along with creative solutions to address them.

“I approach assessments genuinely wanting everyone to present their own perspectives based on their personal expertise,” Reed explains. “Without being critical or judgmental, I encourage people to think differently. That leads to new ways we can work together to create value for all our stakeholders.”

His other strategic priority has been to create a unified team, both within specialties and across departments. Based on the mantra “Check your title at the door”—which applies to everyone, including himself—he has helped create a much more collaborative and cooperative atmosphere.

“I want everyone to know that their voice counts,” Reed says. “I might not be able to act on every suggestion, but I need to hear them. Nobody has all of the answers, so I want people around me who know more than I do. My job is to bring it all together.”

One challenge Reed continues to deal with is the development of a new human capital management system that the company expected to launch shortly after his arrival. After a thorough review of the proposed system, he reached the conclusion that the company should put the entire project on hold and completely reassess it. Because countless hours from numerous departments and a substantial financial investment had already been committed, this could have been a devastating and demoralizing decision. However, the results were quite the opposite.

“I got the full team together, laid out my thinking, and as the discussion continued, everyone seemed relieved,” Reed says. “They seemed to know intuitively that this decision had to be made. Now we’re pivoting as a team and learning together how to build a better system. That’s the kind of full transparency, participation, and collaboration that are the cornerstones of how effective teams must work.”

Reed clearly remembers learning from Sitrin and others at AIG about the economics of a law department. They dictate lawyering aggressively, but not recklessly. It’s a dual focus on protecting the company while helping it meet its business objectives.

With that responsibility in mind, he has strengthened the perception of Acrisure’s attorneys as true business partners. “As lawyers, we are as accountable to the business as our clients are,” Reed explains. “Everything we do has to reflect that and reinforce it with everyone we work with.”

As a result, requests for advice and consultations have increased significantly for a broad variety of issues. Reed believes that by being responsive and collaborative in providing creative, practical, and proactive answers, he continues to change the culture within the company. Instead of feeling obligated to speak with their lawyer, clients genuinely want their input to help make the best possible decisions. According to Reed, that is the sign of a true business partnership.

“When you want to build trust, dedication, and cooperation, it’s amazing how effective smiling and saying please, thank you, and good morning can be,” he says. “Using e-mail as infrequently as possible and sitting down face-to-face, allowing others to see your vulnerabilities, and getting to know people and their families before getting down to business does wonders, too.”