Nick Sakiewicz has had a lifelong love affair with soccer. Today, he pioneers a new legacy for the sport, driving it into America’s limelight.

As told to Tina Vasquez 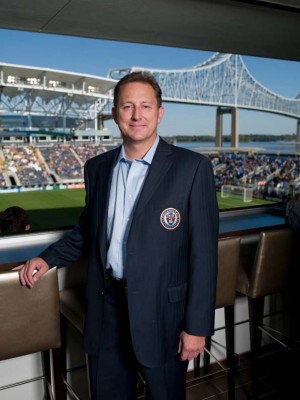 For as long as he can remember, soccer has been a part of Nick Sakiewicz’s life. The sport might even be ingrained at a cellular level, some hereditary love that was passed on by his father. Growing up, Sakiewicz was in a Polish soccer club that competed against other ethnic clubs. The camaraderie and the introduction to new cultures was just an added bonus for the kid from North Jersey who had discovered his purpose in life. Sakiewicz went on to be a goalkeeper at the University of New Haven, and even had a stint in professional soccer, but his career has taken a decidedly different turn, one that has taken him off the field and into the boardroom. Sakiewicz—the CEO and operating partner of Keystone Sports & Entertainment, LLC, the ownership group for the Philadelphia Union—shares how he’s driving the young soccer team to succeed.

“Having a deep understanding of the game, its traditions, and how it’s played gives me a huge advantage when those things are combined with my business acumen. I’m able to realize what’s important for the sport and what’s important for the business in order to deliver the maximum value to our fans. I’ve been involved with this sport at every level, and I carry all of that awareness and experience with me whenever I make a decision.

There have been too many proud moments to count. Just the fact that we were able to build a stadium and launch a team during the worst economic downturn in American history makes me immensely proud. When PPL Park opened in June of 2010, it was amazing, and things have only gotten better since. During our third season, we hosted the All-Star Game, and people told us it was one of the best All-Star Games of all time. I’m not presumptuous enough to make that statement, but it was really nice to hear.

We have a very young team, perhaps the youngest in the league. I’m very excited about it because I know our players are massively talented, but we have to balance that with winning games, which isn’t always easy to do with young players. When you combine veteran leadership, like we have, and a young team, it’s a winning combination. Thousands have gone through our Union Academy for young, elite players, and we take youth development very seriously. Three Academy players have been signed to our team as homegrown players, one of whom is under the age of 18.

Everything we do is about being an authentic international soccer brand. We respect the traditions of the game and we respect the city we represent. Everything from our colors to our logo ties us back to this city, so our narrative is very much tied to the city of Philadelphia. This city is passionate and relentless, and that’s reflected in our team members and the hard-charging, attack form of soccer we play.

“Our narrative is very much tied to the city of Philadelphia. This city is passionate and relentless, and that’s reflected in our team members and the hard-charging, attack form of soccer we play.” —Nick Sakiewicz

I always get asked when soccer is going to be as embraced as football in the US, but it’s really not about that. When I was growing up, soccer wasn’t a cool sport to play, but now it’s incredibly cool. In the past 25 years, a whole generation of American kids has grown up on soccer as their primary sport, so that’s our market. We don’t need to go after American football fans, because that’s not our market, and the American football market won’t be diminished in any way; each sport will always have its fans. Soccer is the sport of new America.

The vast diversity of our country made it difficult for soccer to grow up. Every country plays soccer, and it’s very much about an us-versus-them mentality; it’s all about pitting country against country. Because the US is so diverse, that sort of mentality was impossible to have, because no one group could really assert themselves around the sport of soccer. That’s changed a lot. This young generation of soccer enthusiasts is making America a contender on the world stage.

I’m still as passionate about this game as I was when I was a kid. It’s been an amazing journey. The last 25 years have been revolutionary for American soccer, and I’m certain the next 25 will be even more exciting and dynamic. That’s what motivates me every day. So rarely do people get to combine their life’s passion with their work, and I’m so lucky to be able to do that. This doesn’t feel like work at all. Every day I jump out of bed because I’m still so excited to see what’s going to happen next. ”

There is Nothing Simple About the Culture at PaySimple