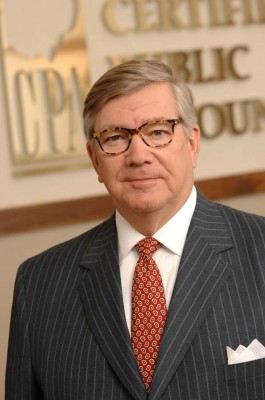 For Clarke Price, the transition from associate to executive only seemed natural. Never one to shy away from a challenge, his career has been a series of adaptations, in each of which he always thrives. Here, he discusses his term with the Ohio Society of CPAs (OSCPA), and how he has the society moving forward and moving up.

Despite being the CEO of the OSCPA, you are not a CPA yourself. What is your professional background?

Price: I majored in business administration, and throughout college I planned to work in advertising. I started working at Coastline Advertising Agency on the East Coast while I was still in school, and started full-time the day after my last final. I was there for almost one and a half years, and then I was drafted. In the army I was sent to New York as a public-information specialist. I got married five days after I was discharged, and I said to my wife, “I want to be in New York, Philly, Boston, or Washington.” She wanted Columbus, Ohio. I answered a blind ad in a Columbus newspaper, and it turned out to be the OSCPA. I just celebrated my 40th anniversary with the
organization and my 22nd year as its CEO.

After 18 years in communications work, how did you decide to make the switch to an administrative role?

Price: At some point in my career, I realized I made a transition. I used to think of myself as a PR guy who happened to be working for an association, but I ultimately made a mental transition and thought of myself as an association executive who was simply working in public relations. I made a transition from PR into governmental affairs and other things before I said, “I want to be CEO because I think I can do a better job.” I saw it as a natural progression.

Does your background continue to play a role in your job as CEO?

Price: My communications background has been absolutely critical to my and the organization’s success. When you look at most associations, be they the Bar, trade associations, or chambers of commerce, their roles are very much about telling a story and communicating a sense of value and importance about an issue. My communications background has been invaluable in allowing me to look at situations and identify the hook that’s going to capture people’s attention.


“We got this wild idea to give membership away. We changed our proposition to: join for free, get all the rights and privileges, and at the year’s end, we’ll invoice you. If we haven’t proven our worth, just tear it up. That had a huge difference for people who had just passed the CPA exam.”—Clarke Price

When you became CEO, what was the state of the OSCPA, and what were your goals to change or improve it?

Price: When I became CEO, I was challenged to make the OSCPA influence the national agenda. Up to that point, we had focused on internal issues and only involved ourselves when legislation was bread and butter for us. My goal was to become more than that and to make us a serious participant in the public-policy arena.

How has the OSCPA extended its influence?

Price: We get involved in a lot of issues, particularly in tax policy and common-sense business initiatives, and we’ve enjoyed a lot of success. In 2009, Ohio was facing an $8 billion budget shortfall. We saw an opportunity to get CPAs together and look at the state as if it were a business. We issued a report and offered 28 recommendations to the governor and the legislature. Since then, more than half have been addressed in Ohio.

What was one of the key policies that resulted from that?

Price: The Red Flags rule created additional liability exposures for businesses and CPAs, and we got involved in telling a story about why this is not an initiative that’s in the best interest of the accounting profession, but more importantly, why it doesn’t benefit the business environment of the state. It didn’t meet any sort of common-sense test. We drove that discussion on the federal level with other state societies and the American Institute of CPAs, and the president signed legislation that exempted CPAs from the Red Flags rule.