It’s a winding road that lead David Mossé to become the general counsel for one of America’s most well-known Fortune 500 retail companies: Dick’s Sporting Goods. But, although he may not have imagined when he started law school that this was where he’d land, he now sees it as a trajectory more rewarding than he could have planned. Profile caught up with Mossé to learn some of the lessons he’s picked up during his tenure with Dick’s and how he “lives the brand” when he’s off the clock.

as told to Seth Putnam

It was the uniqueness of the skill set I accumulated from my different experiences that led me to Dick’s Sporting Goods. I started as an attorney in a law firm, initially with Cravath, Swaine & Moore, then Venture Law Group. I eventually moved on to in-house positions at a couple of different companies—first public, then private. Both were controlled by Nelson Peltz and Peter May, two very well-known operators and investors on Wall Street. When I joined them, I had the opportunity to learn the ins and outs of being an in-house attorney. Having a strong interest in business, this was also a chance to learn through osmosis from very smart guys.

A recruiter contacted me about the general counsel position and told me about the culture at Dick’s—which is very focused on three things: being the best in its class through relentless improvement, an entrepreneurial spirit, and employee collaboration. I’ve always had a strong passion for sports and retail, so on paper it was a fantastic fit. I think their initial expectation was to fill the position with someone who was a sitting general counsel at another company. But I think they recognized my capabilities and decided to go for it, and I’m glad they did.

Dick’s is based right outside Pittsburgh, Pennsylvania, and it can be harder to recruit talented people in smaller markets like this. But I actually think there can be better opportunities here than in some of the bigger American commercial centers. There are some fantastic companies in these smaller markets, and the field can be incredibly competitive in major cities. In smaller commercial centers such as Pittsburgh, there’s often less of an emphasis on the bothersome elements of that competition: materialism, money, power.

For us, being competitive means doing it as a team. I’m not saying you can’t find that in the bigger markets, but I think it’s often much more cutthroat and “eat-what-you-kill” in those environments. We compete with the guy down the street, not down the hall. Plus, there’s the valuable opportunity to have a very real involvement in the community. For me, that’s the Pittsburgh Public Theatre. Being involved is a boost for Dick’s goodwill in the area, but more than that, it’s important to be an active citizen and give back to the community.

Staying physically active is a very important part of it, too. It’s about “living the brand”—and it’s a level of commitment to your own health and fitness. My way of doing that has been through yoga and triathlons (I’ve competed in seven Ironman competitions, including the world championships in Kona). I’ve retired from competitions for now to focus even more on my wife, my three growing boys, and my career. But I think it it’s important that the spirit of the true athlete runs through the entire company and pervades everything we do. 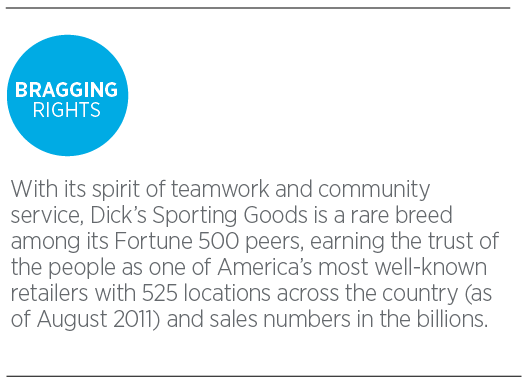 The competitive instinct is a requirement for business. We focus on characteristics that we value: passion, skill, commitment, and drive. In most respects, I think those qualities are inherent: either you have them, or you don’t. That’s what we look for in the people we hire.

The evolution of retail is unfolding right before our eyes. The death knell has already rung for companies like Borders, Circuit City, and Blockbuster because they couldn’t react to the changes in the market. For us, from a legal perspective, we have to answer lots of questions about technology, social media, online/mobile, privacy, and their place in business—which is a challenge but also one of our greatest opportunities. From a business perspective, we have to develop new ways of engaging with our customer and understand how, when, and where they want to be served—and in some cases be innovative and take them places they may not have realized they wanted to go.