Even though Lisa McGill runs Brocade’s HR department “like a business unit,” employees’ input fuels programs for a happier, healthier workforce, earning the company a coveted spot on Fortune’s 100 Best Companies to Work For list.

It wasn’t until her mid-30s that Lisa McGill committed to a human-resources career. She had held a series of HR positions at companies ranging from Coopers & Lybrand (now PricewaterhouseCoopers) to Alcatel. But she thought she might branch out eventually. While serving as HR director at the high-tech firm, Foundry, a vice-president slot opened up. McGill leapt for the promotion, won it, and got an MBA from Pepperdine University to broaden her skills. In 2008, Foundry was acquired by Brocade, headquartered in San Jose, California, which specializes in network convergence, virtualization, and cloud computing. With more than 4,500 employees across the world, Brocade has ranked as one of Fortune’s 100 Best Companies to Work For (2010-2011), and was named to the San Francisco Business Times’s Best Place to Work in the Bay Area (2010). McGill, senior vice president human resources, explains to Profile why the company’s formula works so well.

What is your approach to running a global HR division?
Thankfully HR has well evolved from days past when it was referred to as “personnel.” I adopt a marketing, financial, and operational approach, running it like a business unit. A successful HR organization requires the right product in the right place at the right price at the right time. Sometimes our programs result in a hard cost for departments or individuals, but they can also result in bottom-line savings of money and time.

Why do you think Brocade has earned so many “best workplace” awards?
I think it’s because we really involve our employees. Brocade is a people-centric culture, which solicits, listens to, and responds to employee feedback. The ranking is nice, but it isn’t what drives us. We seek out feedback, and then either we take action or get more information. Then we actually come up with new initiatives and programs. The fact that things are done with feedback makes employees feel they have an influence in molding this company. 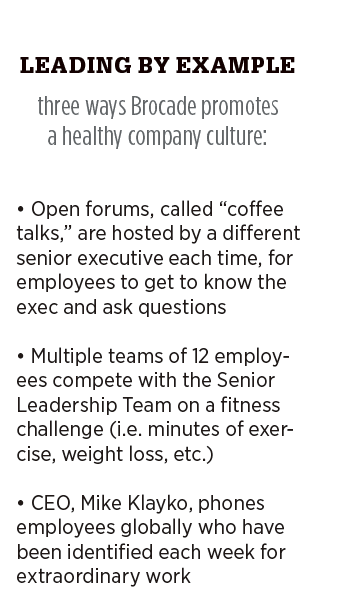 What’s the best example of how Brocade has acted on feedback?
Two years in a row, although overall survey scores were good, our female population was rating us lower than their male counterparts. So we formed focus groups to get to the real issues. We found women wanted more opportunities for networking and development; more perks such as flexible work schedules; and more communication in general, including mentoring. At that point, we created Women in Networking (WIN).

Where does WIN stand today?
We have more than 700 members globally, and 43 percent are men. We opened it up to men because our company has a larger male population, given our industry, but also because they will be agents of change. WIN sponsors events such as executive coffee talks, book clubs about professional development, and guest speakers. We match mentors with mentees of similar backgrounds. Recently, some WIN members spoke at a conference on women in business for upcoming MBA grads at Santa Clara University. Ultimately, we want to take it outside the walls of Brocade, to get young females more interested in math and sciences. That’s going to help us as a society.

How does your wellness program, WellFit, differ from a run-of-the-mill health initiative?
For one thing, programs like WellFit and WIN are not viewed as HR programs, but rather company-wide initiatives with executive sponsors. WellFit was created to support happy and healthy Brocadians through fun activities. We host sports games and Olympic challenges. Sometimes we give away cash or prizes to winners, but often the bragging rights are the biggest motivator. We also team with WIN, for example, walking together for breast-cancer research.

Employees love WellFit because they get to know staff from other departments and around the world through global WellFit Challenges. Not to mention, we have had employees improve their body-mass-index scores, lose weight, and improve their nutrition habits. Employees enjoy using SharePoint, BHive (our internal communications portal), and Vive web tools to share their funny workout stories, track their progress, and post pictures.

You moved into a state-of-the-art campus in 2010. How have employees responded?
Employees like that it is eco-friendly, bright, airy, functional, comfortable, and fun. There are open areas for collaborating, solo rooms, a beautiful fitness center with onsite trainers, fitness classes, games and tournaments, a basketball court, soccer matches, a game room with ping-pong, foosball, and Wii. There is a fabulous onsite Café, which serves a variety of international cuisines and lots of healthy choices, and also a separate coffee bar.

How do you keep employees centered on company success?
First, each department’s goals link back to the CEO’s organizational objectives. This allows us to measure effectiveness more easily. Second is customer advocacy. We’re developing incentives for people to consider how they impact the customer in all they do. If an employee is ultimately productive and feeling engaged or happy, whether that employee is in sales, marketing, or engineering, the customer is going to benefit from that effect.

“The spirit of the ‘true athlete’ runs through the entire company and pervades everything we do.”

Serena H. Huang Is an Asset from Any Angle