In bygone days, servicemen would come together to support the widows of their fallen comrades. Not only did they offer emotional solace, but they also “passed the hat,” collecting much-needed money for the grieving women and their families. However, after the Battle of Little Bighorn in 1876, also known as Custer’s Last Stand, there were simply no survivors to take on that supportive role. And that’s when the Armed Forces Services Corporation’s (AFSC) legacy was born.

During more than 130 years in operation, AFSC’s team has never wavered from its mission of supporting the country’s active duty troops, veterans, and military families with a host of services and programs that are designed to uphold and enhance their quality of life, as well as help mourning families navigate the process of losing a loved one to a military action. From mental-health and physical-rehabilitation programs for wounded soldiers and veterans to financial advice, claims assistance, and counseling for widows and widowers, the organization is dedicated to taking comprehensive care of the men and women who served in the military. “We exist for a specific purpose,” says Geoffrey J. Deutsch, president and CEO. “Our mission is to care for the troops, and that mission comes before anything else.”

In fact, the resolute emphasis on that primary goal encouraged the board of directors to let go of the organization’s nonprofit status in 2000 and spin off as a for-profit, Service-Disabled Veteran-Owned Business (SDVOB) that would allow it to expand its efforts exponentially. “As a nonprofit, we were very limited in terms of the categories of services that we could provide,” Deutsch notes. “By becoming a veteran-owned business, we were able to broaden our efforts by going in and securing government programs that would let us deliver services from the inside out.”

Today, AFSC, which is now led by a distinguished board of disabled veterans, works closely with the Department of Defense and the Department of Veterans Affairs, among other government entities, to develop, manage, and oversee a multitude of programs. It also partners with such organizations as the Mayo Clinic, the Red Cross, the American Legion, and the Tragedy Assistance Program for Survivors (TAPS) to enrich those programs with input from the most accomplished experts in their fields. In addition, AFSC has grown in the past decade to soon have more than 1,000 employees and subcontractors in over 30 states and locations around the globe, working directly with veterans, and military families to identify and meet their individual needs.

What’s more, according to Retired Colonel Austin Bell, director of medical readiness, AFSC’s endeavors have started to extend beyond its “boots on the ground” initiatives in the last several years. “We also work with government officials at the policy level, helping to shape programs that will allow us to take better care of our troops,” he explains. In fact, AFSC works all the way up to the White House level and has been commended by both former President George W. Bush and President Barack Obama for its ongoing service on behalf of the military community. Through the organization’s policy-based activities, Deutsch estimates that the AFSC has impacted more than 5 million people.

AFSC’s impact undoubtedly increases when considering the thousands of hours that AFSC donates annually to nonprofit organizations that serve the military, such as the Points of Light Institute, ServiceNation, and Teach for America. “We strive to support organizations that are coming up with creative, new solutions that will better the lives of our troops,” Deutsch says. As Barbara Van Dahlen, PhD, founder and president of Give an Hour, the nation’s largest provider of free mental-health services to troops and families affected by the Iraq and Afghanistan conflicts explains, “AFSC provides critical services to the nonprofit community. They serve as consultants to assist organizations in their development and growth, focusing on everything from defining and refining an organization’s mission to developing an appropriate and effective business model to improving the delivery of services.” 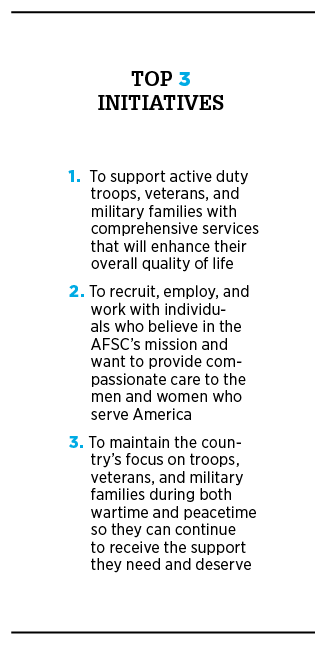 That commitment and “get it done” mentality are what set AFSC apart and have allowed it to become one of the fastest-growing government contractors in the country. And the goal now for the organization’s team—comprised of one-third veterans, one-third military spouses, and one-third civilians—is to maintain that momentum by going above and beyond in support of the military community. “Our people care more about the mission than the paycheck,” Deutsch says. “AFSC is built around a pure desire to help, and the nature of the work we do is so rewarding. But as conflicts wind down, and as media and public and even Congressional attention decrease, we can experience some atrophy in terms of national resources. We feel an urgency to help the government optimize their investments now so we can continue to fund these important programs for our troops.”

Bell concurs, adding, “We want to be a partner and help the government think through its efforts and what they will mean now and in the future. As long as people are put in danger’s way, we have a mission in front of us. The troops deserve our best, which is why we are always focused on delivering more.”