Sometimes in life, situations take on a life of their own and you have to be open to going along for the ride. Cousins Darya and Mo Rafizadeh are experts in this regard. In 1996, Darya’s father decided to start the bottled-water company Nirvana Inc. utilizing springs located on his brother’s land. Things started out slowly in the private-label arena with just 12 employees and unsophisticated pieces of equipment, but before long the company was contracting with major retailers like Walmart and 7-Eleven. It was a family business and all hands were needed on deck, so the cousins felt compelled to pitch in. Mo joined the ranks on the IT side eight years ago and now functions as the company’s vice president of operations. Darya, who’s vice president of sales, joined the company just three years ago after graduating from college.

But let’s rewind for a moment. The land mentioned previously isn’t just any old plot of grass. It’s 2,000 acres at the foothills of the Adirondack Mountains in New York. And the water? The 50 naturally flowing fresh-water springs are a phenomenon in and of themselves. The water comes to the surface by its own natural force and is consistently 42 degrees year-round. Nirvana Spring Water is never mechanically extracted and it’s never tankered to or from different facilities, two claims that very few—if any—North American bottled-water manufacturers can boast.

“Even though we’re considerably new to the market, even well-established companies with a lot of money to throw around don’t have the means to obtain the kind of water that we have access to,” Mo says. “What our competitors do is filter tap water and purchased spring water that’s been tankered in from somewhere else. The purity of our water can’t be matched by anyone else in the country.”

In 2011, Nirvana decided to make a major change. Despite experiencing great success in the private-label market, the company decided to shift its focus to building its own brand. According to Mo, seemingly overnight the company changed from 90 percent private label/10 percent Nirvana to 90 percent Nirvana/10 percent private label—and it’s paid off. Last year, the family company did $30 million in business. That’s not to say that making the shift hasn’t been without its challenges, however. When working in the private-label sector, the company was competing with companies of the same size, but pushing their own brand forward meant they were now competing with long-established, multibillion-dollar companies armed with an unlimited cash flow.

“We obviously don’t have Fortune 500 money, but we’re succeeding by offering a quality product at a cheaper market price,” Darya says. “Plus, our water speaks for itself. Larger companies may have huge budgets for marketing, but we have amazing water that no one else does.” 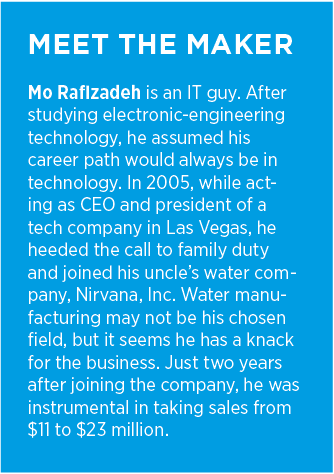 Nirvana is also proving to be a progressive company, making sustainability a major business tenet. Darya contends that the company is inherently sustainable because it preserves the 2,000 acres it currently operates on and takes special care to protect the surrounding land. There’s also the company’s use of recyclable pallets and Mo cites Nirvana’s water bottles as a major source of sustainability. When the company started, their average-sized water bottle weighted 26 grams. Nirvana water bottles are now blown in-house, reducing the carbon footprint of their product and resulting in a drastically lighter bottle. Weighing in at just 10.4 grams, the company was able to shave off more than 50 percent of plastic from each bottle.

Moving forward, Nirvana’s goal is seemingly simplistic: growth. “Our goal is to be the next Poland Spring,” Mo says. “We’re only starting out, so right now it’s like we’re a fly on an elephant’s back, but everyone has to start somewhere, right?”