When Marschall Smith arrived at 3M Company in 2007, he faced a culture shock. Relocating to St. Paul, Minnesota from Chicago, he assumed the role of senior vice president and general counsel for 3M. The four attorneys reporting to him directly had worked at the corporation—which is most known for Scotch tape and Post-its—for 30 years.

Smith immediately appreciated St. Paul for its people and charm. Yet he found it difficult to integrate into a team of lifelong staffers. “The Upper Midwest—Minnesota in particular—is a very unique part of the country, very inward and self-satisfied,” says Smith, 66. “Early on, I made the mistake of not showing the proper deference and respect to the traditions of 3M and Minnesota. My first surveys of performance from my team came back not very good.”

Smith spent a lot of time soul-searching, asking himself how he could be a better leader in an atmosphere so distinct from Chicago and New York (where he had also worked for 25 years). “It was a hard year or two, and we’re beyond it now, but the transition was a tough one,” Smith says. “I learned some humility.”

Smith began to listen—hard. “I genuinely tried to understand and recognize that serving someone was serving their views of the world. If I wanted to lead them someplace, I first needed to gain their confidence, understand where they came from, and appreciate what they had done.”

Not only did he establish real rapport with his colleagues, Smith also repaired the legal department’s lagging reputation, according to Kimberly Foster Price, associate general counsel for 3M. During his tenure, Legal Affairs has received national awards for diversity efforts, been honored for community service, established a “top-flight” compliance department, and increased the number of acquisitions contributing to the bottom line, she says.

But beyond the numbers and accolades, Smith and his wife, Debra, have become known locally for their generosity. The couple, who have five grown children and seven grandchildren in a blended family, support causes ranging from animal rights to education to the arts. “They personify the principle, ‘To whom much is given, much is required,’” Price says. “In Minnesota-speak, the Smiths are ‘keepers.’”

Although a century-old company rooted in tradition, 3M is dedicated to innovation, “reinventing itself every few years,” Smith says. Grossing $30 billion in annual sales, the company aims for one-third of the products it sells to be developed within the last five years. Spanning beyond the consumer sphere, products include several categories: industrial lines, such as abrasives; health care, including heating units that save lives, offering warmth to patients when their temperatures drop; protection systems, such as driver’s license holograms; display and graphics found in cell phones, TVs, etc.; and many more. “We put out only the best products. Unless a product is superior to what’s on the market, it doesn’t go anywhere,” Smith says.

Like 3M, Smith has mastered the art of reinvention. With a father in the Army, he moved about as a child, from California to Alabama to Washington, DC to Ohio. San Antonio—Smith’s maternal family base, where he returned each summer—was his home away from home. With two uncles who served in World War II, in addition to his father, the principles of service, honor, and battle shaped his reality. “We didn’t play cowboys and Indians growing up; we played Germans and Americans. And I always liked being a German, because I thought noble defeat was more fun,” Smith says.

Following in his elders’ footsteps, Smith joined the Marine Corps in 1966, after graduating with a history degree from Princeton on a full scholarship. He was immediately shipped to Vietnam, where he served two years. “My time in Vietnam was a chance to help and work with people and build a nation and a love of freedom and independence,” Smith recalls.

Having moved every three years in his youth, Smith admits he was prone to restlessness in his career. He says this drove him to switch jobs periodically. After earning his law degree from the University of  Virginia in 1973, he worked in the New York law firms Debevoise & Plimpton LLP and Paul, Weiss, Rifkind, Wharton & Garrison LLP , and then in various corporate positions. He landed at Brunswick Corporation, a company specializing in recreational boating, for six years, before being hired by 3M.

“In the Marines, one learns comradeship and loyalty to one’s friends and colleagues—a sense of loyalty to something bigger than yourself,” Smith says. He feels an equal obligation to 3M’s 80,000 employees, whose livelihoods depend on the company’s sound and ethical leadership.

At a global company such as 3M, with 165 lawyers under Smith’s general charge, there’s never a dull moment. Much of Smith’s work involves high-stakes mergers and acquisitions, which are critical to the company’s growth. His principal role, however, remains that of counselor to the CEO and senior management team “to help guide them through the increasingly complex and messy and dangerous world of regulations and legal enforcement.”

In a rapidly changing environment, Smith is sought out continually for his guidance, says Bill Brewer, of the national law firm Bickel & Brewer LLP. “Marschall is at once brilliant and pragmatic, decisive yet deliberate, a valued advisor to his clients, a wonderful father to his children, and a devoted friend,” says Brewer, who has worked with Smith as outside litigator for more than 20 years. 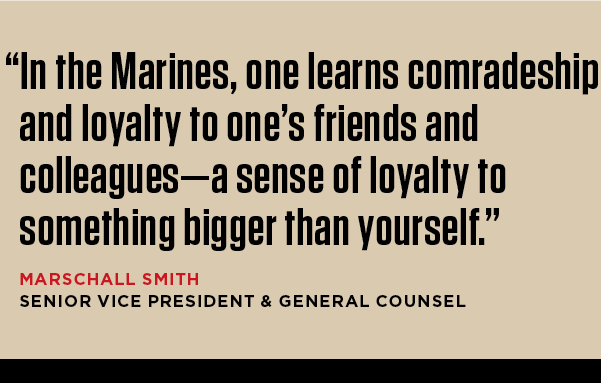 Neil Hamilton, professor of law at St. Thomas University in St. Paul, got wind of Smith’s style of “servant leadership” at 3M, and recruited him as a guest lecturer for the Catholic university. “Marschall is a ‘go-to’ person for me for strong reflection and good judgment about how to live out faith principles in the real world,” Hamilton says. “He is both authentic and inspiring.”

To alleviate the pressure of his day job, Smith is happiest doing farm chores. He and his wife spend a good deal of time at their 25-acre farm in Scandia, Minnesota. Corn, soybeans, vegetable gardens, a 14-pound ornamental Japanese goldfish, six ducks, 12 hens, and a rooster named Henri live on their farm. The Smiths nurse sick ducks back to health. With a neighbor running a woodshop out of one of their barns, Smith muses that one day, perhaps in his next chapter, he’ll become a woodworker apprentice. “I think my retirement job, if not a farmer, will be a cabinet maker,” he says.