With a focus on coaching and collaboration, Leslie M. Jones helps Motorola Solutions rethink how it does business

Leslie M. Jones, PhD, was on the curation staff at New York’s Metropolitan Museum of Art when she realized that her calling was problem solving and fixing things. With a PhD in fine art under her belt, she went back to school and studied software engineering. Looking back on her career now, Jones would no doubt say she made the right call.

Jones’s career path took her to Motorola in 2000. When the firm split into two companies in 2011, Jones moved over to Motorola Solutions, Inc., a $14.5 billion company. She continued her position as CIO, and became part of a team that almost immediately began restructuring and upgrading the technological and process infrastructure from the ground up—a dream job (although an extremely challenging one) for someone who likes to “fix” things. In 2008 and 2010, CIO magazine recognized Jones and her team with its CIO 100 award. Profile spoke with Jones about some of the change she has influenced at Motorola Solutions.

What path did you take to get to your current position?

I started doing software for pharmaceutical quality control, but my background gave me a good grounding in both written and oral communications, so I moved away from being a technologist and into being a person who applied technology to business solutions. One of the companies I worked for was General Instrument, which was acquired by Motorola.

Every day, a certain amount of time is spent with direct staff ensuring that I have a pulse on what’s going on, but also making sure that the organization is moving at the same pace and toward the same goal, that we are carefully looking at prioritization across the enterprise, balancing programs, projects, and expenditures to maximize value.

How do you stay connected with your staff?

I spend a fair amount of time coaching (rather than directing). I have a weekly meeting with each of my immediate staff to touch base on hot points and things we need to share and discuss. I view this as their time, and they can discuss anything they want. The point is to be in constant communication. Then we have a weekly staff meeting where we bring everybody together to expand the conversation to the team level.

How are you aligning IT with the priorities of the business?

When we became Motorola Solutions, we wanted to reinvent the way we think about how we do business. We’re restructuring to think and act like one company with one mission. Our intent is to have a single global system that will run the entire company, and we are working on the assumption that every new business process will take at least half the steps out of the old ones. We examined all our business processes, the way we communicate and connect with our customers, and the way we design products. We added a more entrepreneurial spirit and undertook a massive program to reinvent our business environment that is still ongoing.

We’re rebranding, developing new missions, and upgrading the systems and processes that run our business, including replacing our core financial, HR, supply-chain, and go-to-market systems. Also, we’re rethinking our back-office processes to make them as standard, fast, agile, and personalized as they can be. 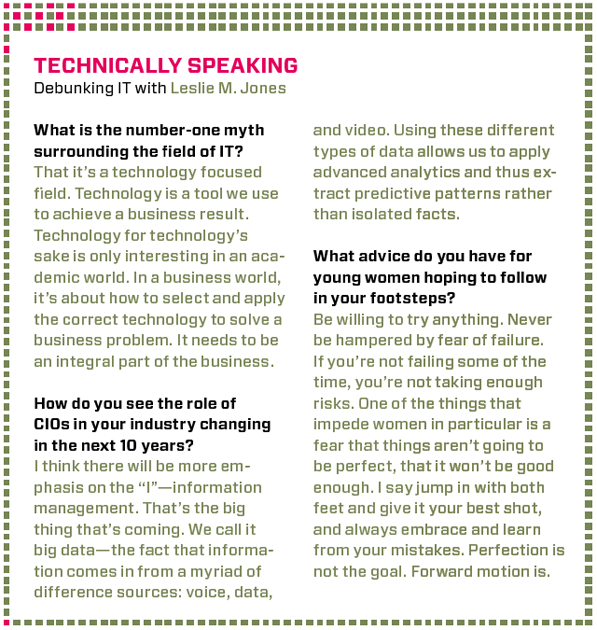 What are some of the major projects you have accomplished?

We made significant changes in the way we go to market and the way our sales force operates. We just rolled out a common sales tool for our PartnerEmpower Program across the globe. That enables us to distinguish among our partners and to proactively know what kind of products we can provide for them without asking questions, and to support products they own as opposed to making it their responsibility to try to locate this information. As a result of these efforts, our PartnerEmpower Program was awarded CRN’s 5-Star Partner rating and named to its 2012 Partner Program Guide.

How would you describe your management style?

I believe the whole has to be more than the sum of its parts. That means that together, as an organization, we are stronger than we would be as independent managers. We are highly collaborative and extremely open. To me, the most important thing I can do in such an environment is to be the conductor in an orchestra of highly talented and competent people who, in working with the ensemble, makes for a better performance.

What is most challenging about your job and business?

The constant change in both the needs of the business and the technology one can offer. In particular, the speed at which things are moving. People used to plan huge, multiyear programs with complex requirements-gathering [assignments] and slow builds. Now the model is an agile and interactive process with much less focus on static requirements.

Not just “The IT Guy”

Rerouting an Airline in Crisis