The idea for the Lewis & Clark Rural Water System was formulated in 1989 because it became apparent that an additional source of water was needed. Twenty cities and rural water systems in southeast South Dakota, northwest Iowa, and southwest Minnesota banded together to create a rural water cooperative using the Missouri River as the source. What we’re doing is very different because we’re basically a wholesaler of water. We will not hook up residential units to the water system; the water will be sold to our members. We’re the first in the nation to do this and it’s been a very long process. We were incorporated in 1990 and it took us 10 years to get authorized by Congress. Federal grant funds were authorized in the Lewis & Clark Rural Water System Act that was signed into law in 2000, but then we had to meet environmental clearances. It wasn’t until March of 2003 that we were actually given the green light to begin construction, but we didn’t start until 2004. 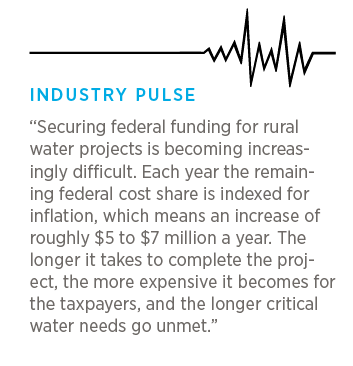 Many people want to know why this system is being built and the answer is simple: quality of life. There are people who have good water, but don’t have enough of it and there are people who have access to water, but it’s poor quality. You also have to factor in the likelihood of drought in this area and the reasoning behind this project becomes very clear. The lack of water is also holding back economic development. In some cities, it’s gotten so bad that they actually have to turn away business. When large corporations approach them, cities have to ask if they’ll need large amounts of water for their production and if the answer is yes, they get sent packing. Thankfully we’re halfway done with construction and we expect to deliver water to 11 of our 20 members by May of 2012. How quickly it gets to the rest depends on funding.

Obtaining funding has been the single most challenging aspect of this project. Eighty percent of our funding comes from the federal government, 10 percent comes from three states, and the rest comes from the 20-member cities. The members and states have prepaid $153.5 million—99.7 percent of their cost share—to jumpstart construction. This is why we can deliver water next year, but any future construction now depends on the federal government. The main problem we’re having is that the federal government is not making payments to keep up with inflation. In 2008, we received $26.5 million, $22 million in 2009, $10 million in 2010, and $2 million in 2011. The proposed budget for 2012 is $493,000, which is not even enough to cover administrative expenses. What’s more basic than water? We’re willing to take our hits like everyone else, but these are massive cuts. You don’t go from over $20 million to $493,000 over the span of four years. There’s cutting and then there’s gutting and this is a very worthy project that both deserves and requires the funds that were promised.

The response from local communities has been phenomenal. They have been very supportive and the impact of the water system is clear. There is plenty of construction work available and it’s estimated that the economic impact to the region will be $374 million. This is a very unique cooperative effort and I truly believe we’re a vanguard; we’re setting a template for other projects to follow. There are similar projects underway in New Mexico and Missouri and I truly believe we’re paving the way for them. Water is the new oil. It’s a finite resource and the Lewis & Clark Rural Water System will help make the most of it.