When he was five years old, Larry Boyd, executive vice president, secretary, and general counsel of Ingram Micro, would repeat back to his parents the cross examinations on Perry Mason episodes. Today, Boyd, 60, isn’t playing out his childhood dream in the courtroom—he’s entrenched in international regulatory law at the world’s largest technology distributor. That’s not to say that he didn’t spend a fair share of time litigating. Boyd served 22 years at Gibson, Dunn & Crutcher in various areas of corporate law, from real estate to trade secrets. He rose to become a partner before moving in-house, and he has found the corporate track just as adrenaline-packed as his trial days. “The GC [general counsel] role is changing,” says Boyd, who leads a team of 35 attorneys and 12 professional staff. “The people in that role are changing. It isn’t so much the paradigm of the senior corporate partner who handled the client’s work for so long who becomes GC for the client as a semiretirement.”

Working in a public company today brings several challenges, he adds. “A background in litigation helps you train to be a faster learner, a quick study. You get new subject matter and problems all the time. You have to make decisions quickly. That’s something that has aided me in this job.”

Case in point: In 2004, an opportunity arose for Santa Ana, California-based Ingram Micro to acquire Tech Pacific, its largest competitor in Asia, which represents its largest acquisition in the last 10 years. The result would greatly expand market shares in Singapore, India, New Zealand, and Australia. The pressure was high, and Boyd was caught in the middle. “We had a team of investment bankers one floor above us working on preparing Tech Pacific’s IPO [initial public offering], and another team
negotiating a deal for us to purchase the company,” Boyd recalls. “Tech Pacific wouldn’t accept making the closing of our deal conditional on competition authority approval—often a months-long process.”

Quickly formulating a strategy, Boyd consulted with antitrust legal advisors in the four countries. In a matter of a week, he told Ingram’s board to take the deal. “It’s been one of the best acquisitions we’ve ever made. We didn’t have a problem with the competition authorities. It was a real shot in the arm we needed in Asia.”

Buying and integrating businesses is where Boyd feels most energized. “That’s where you can make risk-based decisions and try to add some real value to the company,” he explains.

It was precisely the allure of fast-paced business that led Boyd to Ingram Micro in 2000. Prior to leaving his law firm, he had made a short list of a handful of nearby companies in Orange County that were publicly traded and sizable enough to boast sophisticated legal practices.

Then one day Boyd got an e-mail from a colleague saying that Ingram Micro was looking for a leader for its North American legal team. “I picked the phone up and called Jim Anderson, who was then general counsel … I said, ‘I’m interested. I’m a
litigator, but I have lots of experience making deals. They’re
called settlements.’”

Since joining Ingram Micro, Boyd has established a reputation for his business mindset. “He is able to navigate the needs of the business in parallel with the appropriate legal course,” says Bill Humes, senior executive vice president and chief financial officer. “He is focused on solving problems rather than creating roadblocks.”

Boyd strives to keep both ethics and profitability at the forefront of his decisionmaking: “You never want Legal to be the department of ‘No.’ We need to be the department of ‘Yes, but …” He also makes it clear that Ingram Micro’s success is his ultimate interest. “I certainly don’t condemn it when companies devote a large amount of resources to charities. But, the business of business is business. We’re in business to make money for our shareholders and to make profits. I worry sometimes that various interest groups want American businesses to be something other than profit-making enterprises,” Boyd says.

An avid follower of politics—he earned a bachelor’s degree in political science at Stanford University before completing a law degree there—Boyd is known as the “office politico,” according to Lynn Jolliffe, executive vice president of human resources for Ingram Micro. “He enjoys the political process and has insightful opinions on candidates and officials,” Jolliffe says. “Larry spent part of his vacation time visiting members of Congress in Washington, sharing his views on important issues facing the nation.”

As outspoken as Boyd is regarding political affairs (his wife, Anita, is a prominent figure in California’s Tea Party movement, and he accompanies her to related events), he is largely introverted. “I’ve always felt more at ease talking to 100 people than talking to one, because I’m essentially shy, so it’s hard for me to get to know people,” Boyd admits. “But, if I’m told I’m supposed to walk into a courtroom and talk to a bunch of strangers or go to a business meeting and address something that’s important to the company, I just do it.”

Since Ingram Micro lacks a lobbying budget, when the company is affected by a local or federal regulatory issue, it’s an investment of his “sweat equity,” Boyd says. Regulatory matters keep Boyd perspiring on a full-time basis, navigating complex domestic and international-compliance laws. In late 2010, Ethisphere magazine recognized Boyd for his work in that realm. Since then, he has advanced his efforts, co-coordinating over the past year (with legal officers from Ingram’s chief competitors who are members of the Global Technology Distribution Council) an industry-wide compliance initiative. The program aims to standardize the information that large vendors such as Hewlett-Packard and Cisco solicit from tech distributors such as Ingram Micro—and to collect the same data downstream, from resellers around the world, housing it all in a central database. “It will add real benefits and transparency, and it will make the channel a safer place to do business,” Boyd says.

Many of the high-growth areas for Ingram Micro—Mexico, China, Indonesia, India, Malaysia—have rapidly expanding economies, but also boast a reputation for corruption. Through this compliance initiative, Boyd is fighting to deter corruption which, he says, can impact an entire company even if perpetrated only by a lower-level inattentive employee. “These days my greatest fear is picking up the phone or getting an e-mail and finding out that some associate or business partner somewhere has made a stupid mistake and blundered into a regulatory problem with the FCPA [Foreign Corrupt Practices Act]. I fear that more than anything,” he says. “And a lot of my peers, if they’re being honest, would say that as well.” 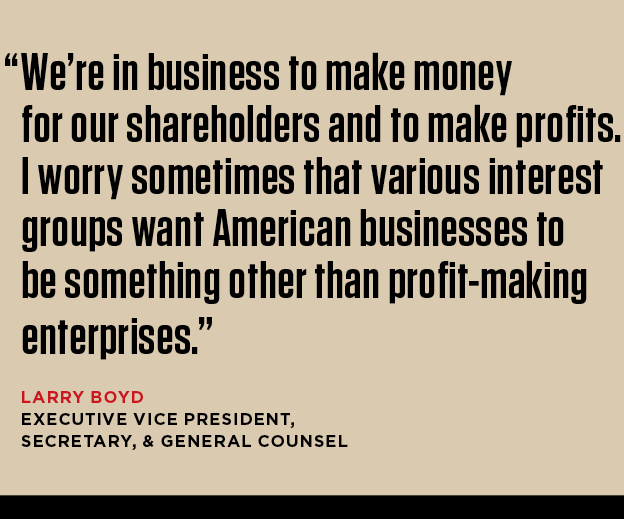 Juggling All the Components and Managing to Grow a Start-up