In 1991, when he was just 27 years old, Michael Kahn learned of a business opportunity from his father that involved recycling used toner cartridges. Despite pursing his MBA at the time, Kahn worked tirelessly to grow the business, making nothing in the way of a steady income. His hard work would eventually pay off when this venture became Genesis Technologies, now considered one of the most notable managed print services providers in the country, specializing in infrastructure optimization and workflow assessment. This past summer the Northbrook, Illinois, company celebrated its 20th anniversary and rather than reflecting on past achievements, Kahn celebrated the milestone by thinking about Genesis Technologies’ next move.

What did the company turning 20 mean to you?

Obviously, it’s a very important milestone. I remember when we first started out I had an accountant who would constantly remind me that most businesses fail within the first two years. To be honest, I never thought of not existing. When the company turned 20 in July we had a big party and I used the time to reflect on where we are, not where we’ve been. I thought about our goals moving forward. I guess I’m not very good at celebrations.

Moving forward, what are your goals for the company?

The focus is always to grow the business, but I also want this business to mean something. I want us to stand for something more than the products we sell. For example, the clothing company Patagonia stands for making high-quality garments that don’t harm the environment. We’re searching for a cause we can stand behind and support. As I get older, I’m starting to think more about the legacy I’m leaving behind. I want us to be about more than fixing printers and selling cartridges. Those are very good things that help our clients, but I also want us to stand for something more significant. 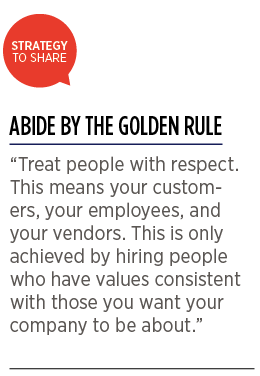 What experiences, either work-related or otherwise, prepared you for being the CEO/president of your own company?

Growing up my dad had his own business. Whereas most people consider having a business as exciting or risky, to me it was a “normal” career path. I think that was very helpful in terms of making me feel confident that I could do this. I also played competitive tennis for 10 years. When you play, you’re alone; you’re not competing as a team and it forces you to be very goal-
orientated. You have to constantly ask yourself, “How do I get better, how do I win?” That kind of mindset really lends itself to having your own company.

When the company was first starting out, what were some of the challenges you  encountered?

The biggest challenge is being a small company and everything that goes along with that. You’re looking to hire talented, passionate people, but if you think about it, who wants to go work for one guy sitting behind a desk? When you’re a new company with a small staff, credibility becomes an issue and no one takes you seriously. At the time, I remember trying to think of ways to better compete with larger companies providing the same services, but at the end of the day I realized that our service and prices were already better.

Did the recession affect the company? If so, how did you adapt?

Our revenue dropped between 10 and 15 percent. We’re business-to-business orientated and we had a lot of clients that went out of business and others that shrunk dramatically, which affected how much printing they were doing and in turn, that affected our revenue. We had to really buckle down on our expenses and we had to eliminate some jobs. I had to look at things differently. The question became is this thing necessary or useful, does it add value to the company? If the answer was no, it was eliminated.

What would you tell a person looking to start their own company in this industry?

I’d tell them to trust their instincts, to be confident, and believe in what they’re doing. A lot of people will question your abilities and doubt your ability to succeed, but you have to push past that with hard work. You have to be willing to work hard, to do whatever it takes. You have to be self-motivated or else you won’t make it in this economy.