As a child, Jim Cochrane fantasized about working for the Texas Rangers. Today, as the team’s SVP of partnerships, he’s focused on generating the revenue to build the best roster in the American League. 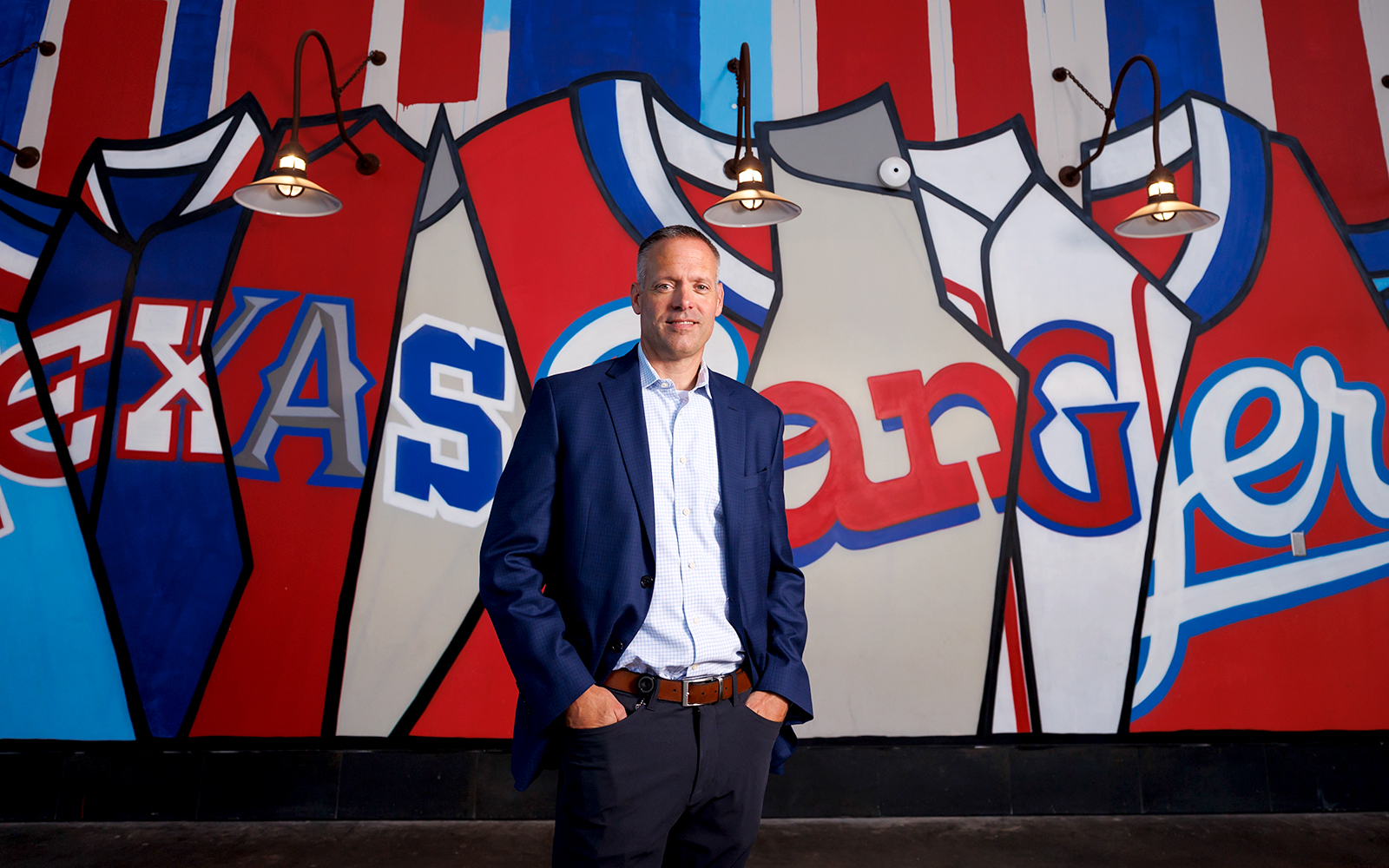 Like many kids, Jim Cochrane dreamed about working for his hometown sports team. He grew up in the Dallas-Fort Worth area rooting for the Texas Rangers and remembers heading to the stadium to watch greats like Nolan Ryan, Rafael Palmeiro, and Juan Gonzalez. When Cochrane was close to graduating from the University of Oklahoma in 1996, he knew it was time to try to land his dream job with the franchise—he would just need a stroke of luck.

It was May, and Cochrane, who had switched his major to journalism, was preparing to finish an extra semester of college to accommodate the change when his mother asked for a favor. She needed a ride to the ballpark in Arlington. Why? She wanted to audition to sing the national anthem.

The audition went well, and she was selected to sing before a home game. Cochrane joined his mother on the field to prepare, and when a Rangers employee asked what he would do after college, Cochrane had a bold response. “I want your job,” he told her. The employee said he would have to start as an intern and asked for his résumé.

That sparked another series of fortunate events. A manager interviewed Cochrane and told him to check back in ten days. When he did, he learned the team had been too busy to interview anyone else—but they needed someone to show up. Cochrane came back to the stadium on January 28, 1997, and has been working for his favorite team ever since.

Life with the Texas Rangers has been exactly what Cochrane had hoped for. “If you can have a career working in sports, are you really working every day?” he asks. In 1997, the team that came to Texas from Washington, DC, in 1972 was coming off its first postseason appearance in franchise history. Its ballpark was only three years old, fans were excited and expectations were high. The excitement fueled the team’s employees, and Cochrane got valuable entry-level experience as he stepped into a partnerships department and learned to work with sponsors.

Although the Rangers struggled in 1997, Cochrane’s job performance earned him a full-time offer selling partnerships. The team improved and made the postseason again in 1998 and 1999, and Cochrane settled into a small department selling new features like rotational advertising signage behind home plate.

A lot has changed since then. The team, league, and industry have all evolved. As senior vice president of partnerships, Cochrane manages a large team, deals with clients that have huge budgets, and supports many events outside of baseball.

In 2016, when the Rangers announced plans to build a new stadium, Cochrane knew he would have a major project on his hands: selling the naming rights to the team’s new home. Instead of finding a new partner, he and his colleagues worked with Globe Life to extend their partnership from the old venue to the new one. The insurance company will retain naming rights to the Rangers ballpark, currently known as Globe Life Field, through 2048.

“Our sponsors are seeing the value we bring and how the Texas Rangers and Major League Baseball (MLB) can help their brand and increase their profile not just in a city but in a region and around the country,” Cochrane says.

It’s just one of many big projects the partnership staff handles. The $1.25 billion Globe Life Field hosts rodeo championships, college football and baseball games, concerts, and other live events. The team’s owners also manage their former stadium which now serves as an outdoor entertainment venue. Cochrane supports those events and other adjacent projects.

Cochrane knows his twenty-nine counterparts at other MLB teams are doing similar work, but believes the personal touch sets his group apart. “We’re not in sales; we’re in the relationship business,” he says. “We want our partners to feel like the money they spend with the Texas Rangers is the best money they spend because we know them and take care of them.”

Nothing demonstrated that philosophy in action more than the team’s response to the COVID-19 pandemic, which delayed Globe Life Field’s grand opening and the start of the 2020 baseball season. The venue’s first planned event, a Chris Stapleton concert, was canceled just forty-eight hours before showtime.

Cochrane had negotiated every sponsor contract and was looking forward to celebrating a ribbon cutting. Instead, he was busy renegotiating contracts in a period of uncertainty. Globe Life Field was about to host thirty home games without fans when partners expected eighty-one sellouts. Cochrane asked those on his team to work closely with clients and find good compromises to keep them happy and engaged for future seasons.

Today, Cochrane is renewing partnerships and working behind the scenes to sell a new product: a four-by-four-inch jersey patch approved by MLB for the 2023 season. It’s a new opportunity without a set value. The San Diego Padres have a four-year $9 million deal with Motorola. Rumors are that the Boston Red Sox are closing in on a ten-year $17 million agreement with MassMutual.

The revenue Cochrane can generate will go to owners who use the funds to improve the on-field roster. The Rangers last went to the playoffs in 2016 and although they made it to the World Series in both 2010 and 2011, they have never won it all. Cochrane knows his team will one day emerge as league champions—and he wants to be there to see them hoist the Commissioner’s Trophy when they do.

Haleh Tabrizi Seeks the Next Challenge