After nearly four decades with Bain & Company, Adrienne King is ready for a seat in the corporate boardroom

A temporary assignment on a small account nearly forty years ago changed the course of Adrienne King’s life and career. The Chicagoan thought she was headed for a career in advertising when she took an internship at Leo Burnett, the famed company behind Tony the Tiger and the Marlboro Man.

The young King, however, spent her time on a small account for a Kellogg subsidiary. In that role, she scoured data from local markets to help a popular regional tea company understand their growth potential and guide their hyperlocal strategy. In doing so, she realized she enjoyed consulting roles more than those in full-time advertising. 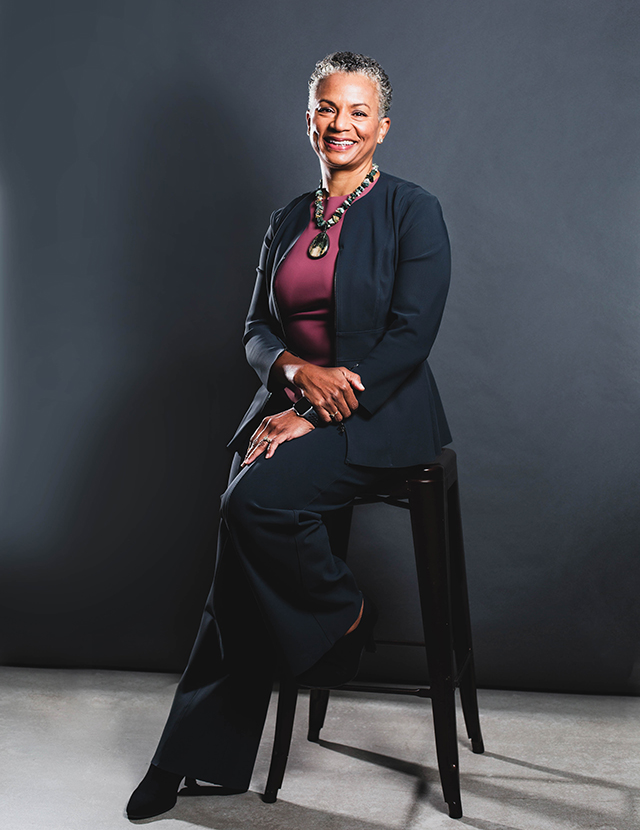 Not long after, King found her way to an informational session for Bain & Company Inc., the Boston-based member of the “Big Three” management consultancies. As she listened to how Bain consultants work collaboratively with clients to improve business outcomes, she felt a sense of interest and belonging. King started with the organization in 1986 and has been there ever since.

Over the course of the past three-plus decades, King has moved around the organization and nation. She’s held roles in Boston, Chicago, and San Francisco; she’s managed individuals as well as groups; and she’s worked across many types of businesses and industries. Now, the Yale and Stanford alum is back in her native Chicago as Bain’s executive vice president of talent management for the Americas region.

Years ago, when King first joined Bain’s Chicago office, she was one of the first twelve people in the office. That office now has more than eight hundred employees, many of whom have inspired King with their leadership. “I’ve had a front-row seat to how a big management consultancy works, and I’ve seen that the best leaders have a clear vision, articulate what needs to be done, remain open and honest, and hold people accountable,” she says.

That approach has defined King’s own career as she’s volunteered for more complex assignments, mentored others, led big projects, and emerged as a veteran leader in her own right. 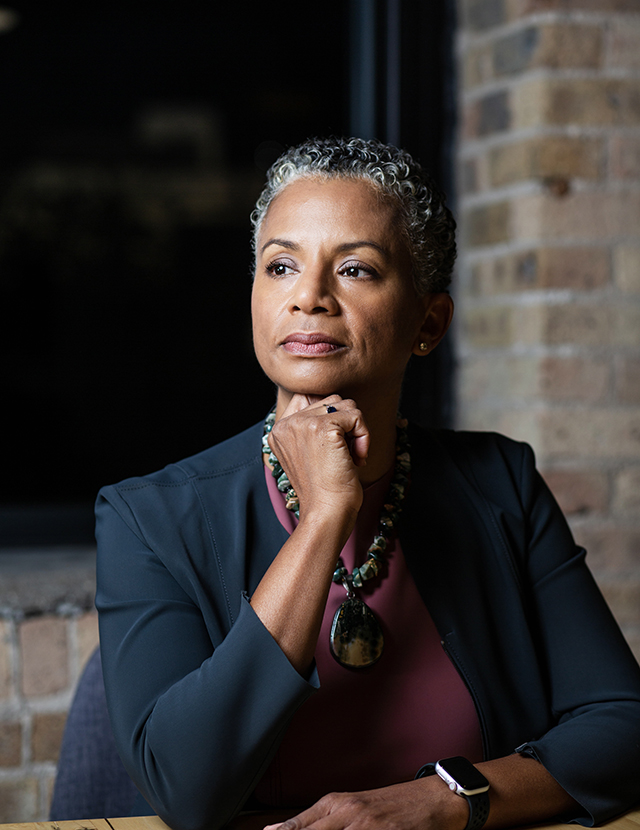 While this work has certainly kept King busy, it’s also prepared her to serve as an effective and influential voice on public, private, and nonprofit boards. Fifteen years in client-facing roles in a leading strategy consulting firm and twenty years in a variety of talent leadership roles combine to allow her to bring profound strategic and operational expertise on topics such as attracting top talent, employee engagement and retention, and diversity, equity, and inclusion (DEI).

King has recently served on the boards of two major nonprofits, Chicago Public Media and the Chicago Sun-Times. She was a member of the team that evaluated and recommended the merger of the two entities, which was finalized in early 2022, and was one of two Chicago Public Media board members to be selected to also sit on the Sun-Times board upon completion of the merger.

Now, King hopes to leverage her skills—and the experiences she’s gained at Bain & Company—in corporate boardrooms. Earlier in her career, the EVP was part of a team that established a profit-sharing plan for junior consulting staff members—a plan that is unique in Bain’s segment of the market. “We were able to identify a need, expose a problem, come up with a novel idea, and find success through its implementation in partnership with multiple teams,” King says of the effort. The project brought a ten- to twenty-point increase in retention at different levels of the company.

In 2020, King helped Bain reevaluate its DEI initiatives. The organization’s leaders expressed an interest in accelerating their progress in DEI and created a team to elevate those topics. King was on the steering committee that approved the new approach, which included a redesign of core talent processes to mitigate bias and the establishment of targeted programs to support underrepresented groups. 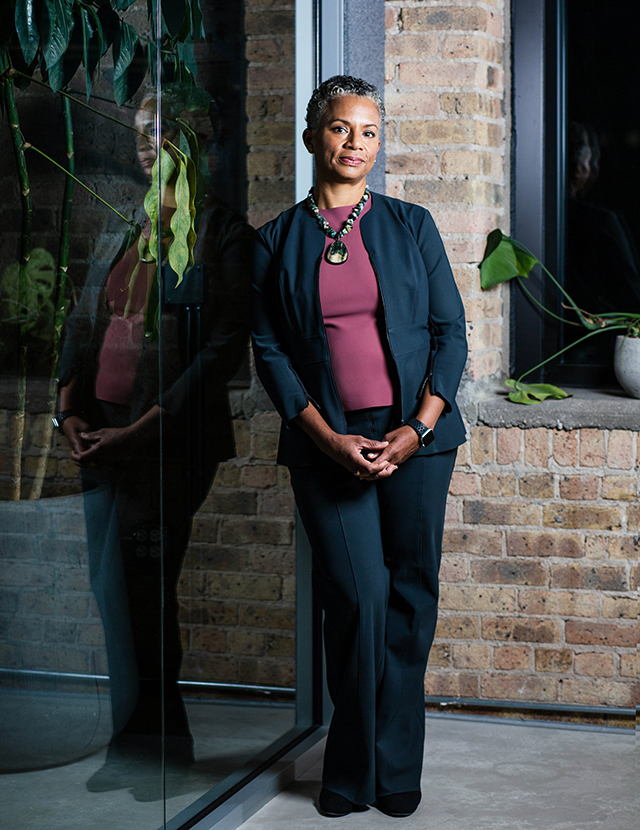 Now, King has her eye set on corporate boards. She’s looking at groups that want to increase their diversity and that value the perspective a Black woman leader can offer. For now, she’s busy doing what she suggests any aspiring board member does—studying. King follows the Athena Alliance and other development groups for female leaders and stays active with similar affinity groups at Stanford. She also networks with friends, family members, and colleagues who serve on boards to learn about their experiences and discover what corporate boards look for in candidates.

As a mother of three, King has been focused on both family and career. Today, she’s preparing to get her third and youngest child off to college. “I’m at the stage where it’s important to give back,” she says. “And I see board service as a great way to spend time doing that.”

Adrienne brings at least two skills that are essential in any boardroom: talent management and strategic thinking. One of the most important responsibilities of a board is ensuring that the company has the best CEO possible: boards are responsible for hiring, evaluating, and developing their CEO (and firing them, if necessary). From there, it is the CEO’s responsibility to ensure top talent through the organization (although board members can help).

Adrienne’s role within her company, and her client experience, have provided her with the necessary experience to perform and lead in this important role as a board member. She is well positioned to help ensure that talent, compensation, development, and recruiting programs and systems are supportive of the business. Particularly in today’s “War for Talent,” these skills are highly valuable in the boardroom.

Another topic that is top of mind for most company boards (including the SEC) is diversity, equity, and inclusion (DEI). DEI is an essential part of ESG (environmental, social, and governance), and Adrienne’s experience in developing, implementing, and nurturing DEI principles for her company would be highly useful for boards seeking to fulfill DEI goals.

Boards for public companies also need to have a three-to-five-year business and operating strategy for the company—and they need to communicate that strategy to the company’s constituents. They also have to develop sub-strategies and ensure tactical application, which often requires subject matter experts in areas like IT, data, and supply chain. Developing and testing that big strategic framework is often the most challenging requirement for the board—but also the most interesting.

Based on her experience at Bain & Company, Adrienne is perfectly suited for the strategic work that gets done in a boardroom. She brings experience not only within her firm (as part of her work managing human capital) but also with client work. She demonstrated this skill as part of her board experience with Chicago Public Media. The leadership role she took—along with her fellow board members—in the transformation of this innovative nonprofit media organization into one of the first national models is exactly what a board role looks like.

An Interview with CloudWerx Cofounder and CRO Betsy Reed

Nichol Garzon-Mitchell Knows Her Way Around the Boardroom

Allison Grant Williams Is a Difference-Maker

To Raj Badhwar, CISOs Are the Boardroom’s Best Defense