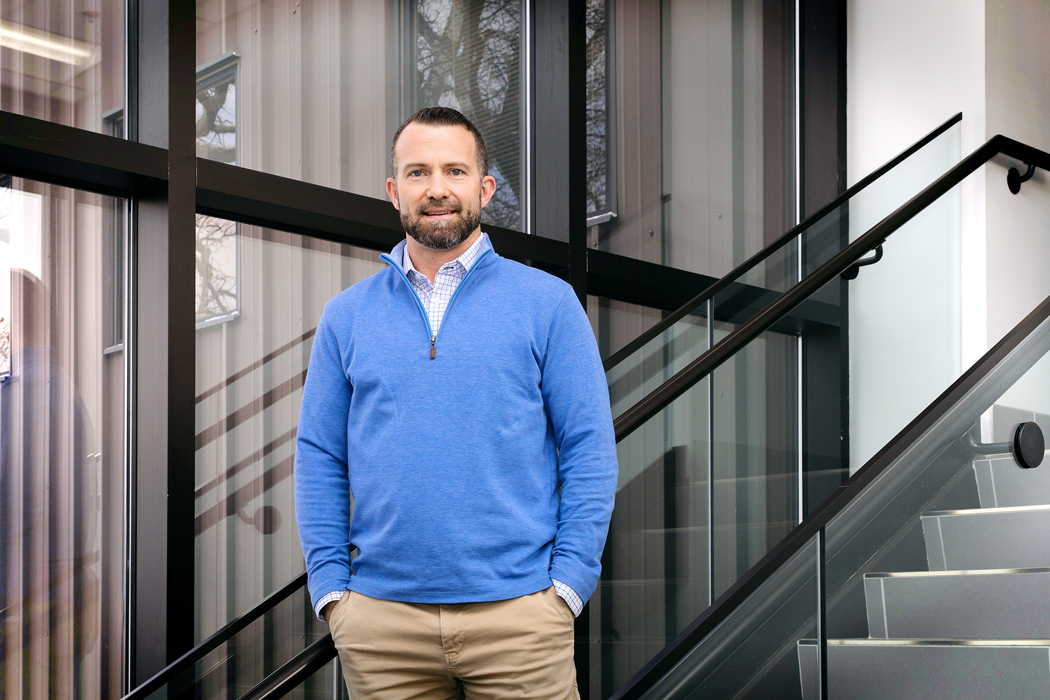 Kip Emenhiser has always been drawn to numbers. Growing up in rural northeast Indiana, Emenhiser found success in both athletics and academics—particularly when it came to math. He had opportunities to play baseball and football at a number of small schools, but Emenhiser chose to leave the nest to study at Indiana University. By taking on the challenge of attending a large university, he felt like he was doing something bigger.

With an accounting degree in hand, Emenhiser built a successful career in finance—first at PricewaterhouseCoopers and now as vice president of finance and corporate controller at Lippert Components.

Emenhiser’s first job after graduation was with PricewaterhouseCoopers in Indiana, but he quickly realized public accounting wasn’t what he wanted to do. After four years at PwC, Emenhiser joined one of his clients in healthcare services, Press Ganey.

“The growth of Press Ganey as a company perfectly aligned with my professional development,” remembers Emenhiser, who spent fifteen years at the South Bend, Indiana, company. “When I started there, the founders of the company were still running the business; looking at their daily cash balance was how they managed things. A couple of years into it, they decided to sell to a private equity firm, so I gained a tremendous amount of experience with the due diligence and sale process.”

Once the sale was complete, Emenhiser gained experience with the management style of a private equity firm and learned another way of doing things. This came in handy when the company subsequently went through another private equity deal five years later. Later, he would help Press Ganey go public, learning the ins and outs of the IPO process. And not too long after, it went back to private.

“There were lots of challenges during the IPO process and subsequent move back private, but challenges provide opportunity and that’s what came through for me in my career trajectory with Press Ganey’s maturation,” Emenhiser shares.

In 2017, Emenhiser had the opportunity to join a former PwC colleague. He switched industries and joined Elkhart, Indiana-based Lippert Components, a leading supplier of components to the recreational vehicle industry.

Day-to-day, Emenhiser leads the corporate accounting team as well as the financial planning and analysis team. He’s also responsible for budgeting, forecasting, analysis, data metrics, and acquisition processes. “The most important thing is to get the books closed accurately,” he explains. “We have quarterly SEC filings we have to do, and our year-end annual findings.”

His goal is to create a culture centered around positivity and to have people that he trusts, are dedicated, and know when to work hard. That’s why when Emenhiser joined Lippert, he brought two of his own team with him.

“Going through all the changes at Press Ganey, I had to build a team out and have strong support,” Emenhiser notes. “These guys were really critical in helping with some of those processes and I had great relationships with them, so when the opportunity came to bring them over to Lippert, it was easy to make those calls.”

As a leader, he describes himself as someone who is “supportive and positive,” and he looks for that same positivity in those who work for him.

“I think that’s critical,” Emenhiser says. “Collaboration is important. I’m sort of a hands-off leader, offering support, providing guidance, and communicating regularly the best I can while letting the team have the freedom to figure things out. I’m not going to always tell them how to do something, so I can cultivate an environment of allowing folks to step up and be productive in a positive way.”

He has an open-door policy and appreciates candid feedback. Plus, before he leaves the office each day, he checks in with his team just to see how things are going and if there’s anything they need.

“I’ve had many bosses over my career, and there were times when you wouldn’t speak to your manager for over a week, and that can lead to uncertainty and not being clear on a particular direction,” Emenhiser explains. “I try to make sure everyone is clear on communication, and that leads to things being done right.”

For the year ahead, Emenhiser has helped design the pillars of what the future of the finance team should look like.

“We want to move from a finance function that’s just a governance function to guidance, where we do what we need to quickly and accurately but then focus on what we can do to improve the business,” he explains, “whether that’s metrics, forecasting, improving our data, or getting information to our leaders and having a seat at the table with them as they’re making their decisions.”

Thinking back to his blue-collar upbringing, with both his parents having worked in factories, Emenhiser feels his strong work ethic comes from watching his family and friends.

“I gained an appreciation of the hard work that goes into blue-collar jobs, and I’m proud of my upbringing,” he shares. “It’s taught me the values that have helped me succeed in my career.”