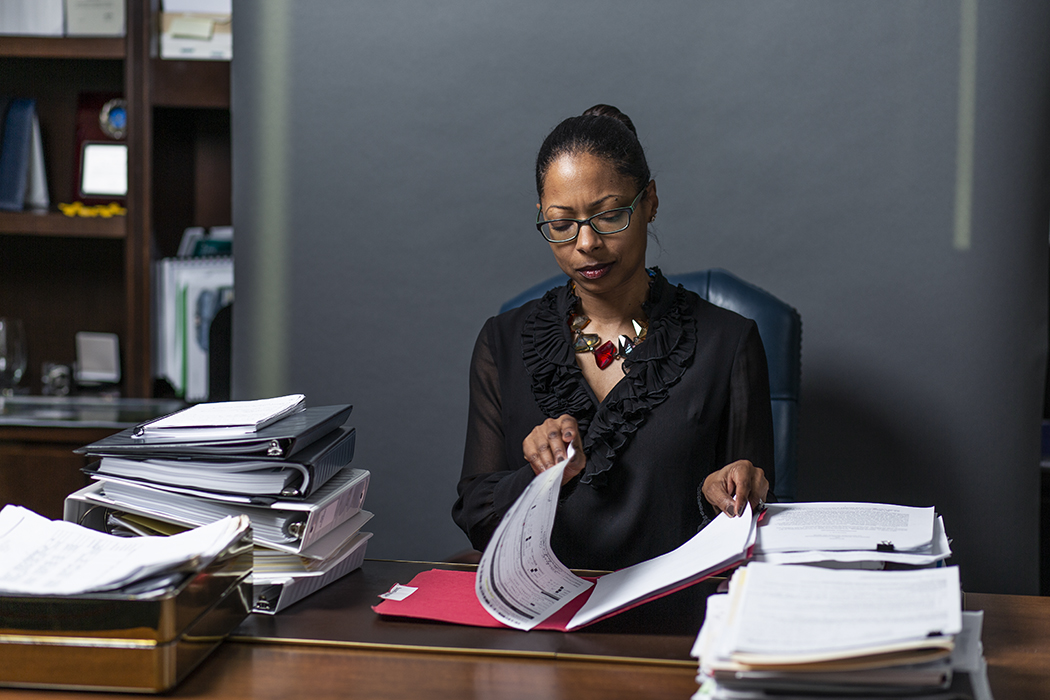 “Many are called, but few are chosen.” Vanessa Allen Sutherland was not just called; she had what it took to be chosen.

While working as a senior counsel at Philip Morris/Altria in 2011, she got a call about an opportunity at the US Department of Transportation. “Working at a Fortune 15 multinational like Altria during acquisitions and restructuring made me a much better attorney, and I wouldn’t trade those years for anything, but the DOT offered a chance to work in a historic administration and to lead a legal department,” she explains.

She made the move to be named chief counsel for the DOT’s Pipeline and Hazardous Materials Safety Administration, which gave her top-secret clearance to oversee a new area of law: the safe transportation of hazardous materials throughout the country. “It was extremely important work,” she says. “And I liked interacting with and balancing the interests of so many different parties—i.e., Congress, government agencies, environmental and industry groups, public and private companies, unions, and the public.”

While at the agency, she addressed agency culture change and novel policy matters. She represented the United States before the UN International Civil Aviation Organization (ICAO) and was named a 2015 DOT Inspiring Leader for her leadership in helping establish standards for the international transportation of hazardous materials and for finding areas of consensus among varied, often opposing, viewpoints. Her stellar performance was recognized, and in 2015, President Obama nominated her to head up the US Chemical Safety and Hazard Investigation Board (CSB). After being confirmed by the Senate, she was named CSB chairman and CEO, where she oversaw a staff of 40 and an $11 million budget.

The CSB was experiencing a tumultuous time. The then chairman had just resigned amid claims of mismanagement, whistleblower retaliation, disenfranchisement of fellow board members, low morale, and possible violations of the Federal Records Act. So why did she want the job? “I love a challenge,” she laughs. “I also loved the Board’s safety mission and thought I could provide leadership, structure, and predictability, and create a culture that would be ethical and compliant.”

First, she spent time with each employee, letting them get to know her and vice versa, to build rapport and trust. “I told them I needed their help, that they had expertise we needed to accomplish our goals,” she says. “Then I identified the ‘sticky’ people, the ones that have positive outlooks, who others are likely to follow, and made sure they understood and agreed with our mission. Lastly, I focused on resolving backlogged investigations. I assigned people to project teams to help them rebuild relationships and enabled them to return to the high-impact work of chemical safety and accident prevention. This resulted in a renewed sense of purpose. As one employee told me, ‘Nothing builds morale like getting important work done.’” After her first year, a government survey named the CSB one of the top five most improved federal agencies.

Yet in March 2018, Allen Sutherland was told by the Office of Management and Budget that the administration had proposed to provide CSB funding only to the level needed to shut it down. “That was a disappointment and marked the second consecutive attempt to eliminate the agency,” she says. Despite the fact that she had two more years left in her five-year appointment, she resigned.

Her illustrious career and CSB achievements were well known, though, and she caught the attention of several headhunters. One called about an opportunity as vice president of law at Norfolk Southern. Reporting to John Scheib, the company’s executive vice president of law and administration, Allen Sutherland oversees legal matters affecting the company, including litigation and claims, labor and employment, real estate, corporate governance, insurance, and marketing and sales.

“The challenges vary daily,” she says. “We’re constantly working to improve our service, whether that means technology upgrades or enhancing our infrastructure.” One of the federal mandates they’ve been responding to is called Positive Train Control, designed to help rail companies ensure that trains operate within safe parameters. Norfolk Southern has installed the required equipment on 2,900 locomotives with onboard computers and trained more than 18,620 employees and their supervisors. The company is also using technology to improve the customer engagement experience.

As Allen Sutherland puts it, “We’re coming to see ourselves less as a railroad and more as a technology company that happens to run trains.”

On the list of new high-tech initiatives, automation could be one of the biggest game changers. “Just like driverless cars,” Allen Sutherland says, “there is excitement about automating commercial transportation systems, like trains. In fact, railroads, which run on separate fixed tracks, are the easiest use case for many automated technologies. When we assess the tremendous positive impact automation could have on the safety, reliability, and efficiency of rail service, it really drives home the importance of attracting bright minds with the skills and passion to help us get there.”

Allen Sutherland also notes that Norfolk Southern is furiously working to unlock the insight—and foresight—hidden within big data. “Data analytics enables a more nimble, resilient operation by allowing us to predict and correct issues before they happen,” she explains. “Collecting the data isn’t difficult, but having people who can analyze and translate it into actionable results requires highly trained individuals with an aptitude not only for data science but for railroad engineering as well. We need people who can see the trends and then operationalize them to proactively resolve problems—from locomotive battery failures to rail wear—before they impact service.”

Allen Sutherland explains, “This is all part of Norfolk Southern’s goal to ‘reimagine possible’—to constantly question the status quo and think creatively and critically about everything we do.” The same theme underpins the company’s new three-year strategic plan, which will include a focus on growth, productivity, and service.

Allen Sutherland has been challenging the status quo and pushing the boundaries of what others consider possible throughout her extraordinary career, starting with her education. In the late 1990s, she earned both a JD and MBA from American University, the latter with a focus on the relatively new fields of IT and e-commerce. She was an early recipient of the Certified Information Privacy Professional status in the early 2000s, as privacy and IT began to converge. The dual degrees served her well in her first in-house position, as corporate counsel at Digex—a subsidiary of MCI/WorldCom that was an early leader in corporate web hosting and outsourcing—and have enabled her to tackle progressively difficult and specialized areas of knowledge.

“I have my brother Sterling to thank,” she explains. “He holds computer science and electrical engineering degrees and recommended I include technology in my education, because it was a nascent, important field. Boy, was he right.”

The Close Relationship Between Diversity and Diversification