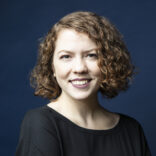 When Jamie Hay graduated high school, she had no idea what she wanted to do in her career. “Neither of my parents graduated high school, so they weren’t well positioned to assist and say, ‘Oh, here’s what you should be doing and when you should do it.’” Hay says. But after she landed an entry-level job in the payroll department at industrial manufacturing company Ingersoll Rand, her path quickly became clear.

“I grew up at that company, I really did,” Hay says of her eleven years at Ingersoll Rand. And during that time, Hay met someone who would change her life and career for good. “I believe a lot of life depends on what we do and how well we perform. However, a big part of it is also luck, being in the right place at the right time, and meeting the right people,” Hay says of her first finance manager Dave Gordon. “Dave was my first mentor; he encouraged me to take advantage of the company’s tuition reimbursement, and I ended up finishing my degree in three and a half years while I worked full time.”

According to Hay, leaving Ingersoll Rand—leaving “the nest”—was one of the first professional risks she took. But at JLG Industries, where she stayed for the next eight years, Hay saw her first opportunity to meld her expertise in finance with a position in HR.

“While in the finance department with ‘normal’ financial duties and responsibilities, I was also accountable for the healthcare benefit accruals for the US as well as managing the overall equity program, executive retirement plans, and the company’s bonus program,” Hay explains. As a result, her experience translated rather perfectly to the compensation and benefits position that the newly appointed CEO wanted to create in the company’s HR department.

It was a risk to leave a strictly finance-based role, Hay says, given she had her eye on a future CFO position at some point in her career. “I decided to take a risk and if it didn’t work out in HR, I would just get a job back in finance,” Hay recalls. “At least then I wouldn’t be lamenting what could have, would have, and should have been.”

Fortunately, that first HR role proved to be exactly the foundation Hay was looking for to build her career while leveraging her existing financial skill set: from that position, she moved to top HR positions at Harsco Corporation, which later a division of that company combined with brand energy and infrastructure services. Most recently, Hay served as executive vice president and chief human resource officer at BrandSafway, a $5 billion provider of specialty services for the global energy, industrial, and infrastructure markets.

Throughout these leadership roles, Hay has strived to live up to the example that Gordon set for her. “He always took me to meetings and would say, ‘Unless they ask you to leave when we get there, you sit in that seat, keep your ears open, and your mouth closed—this is where you’re really going to learn things, things you can’t learn in a textbook or a class,’” Hay says of her mentor.

Inspired by Gordon, Hay has always tried to be very mindful about her own hiring and mentoring practices, in some cases deliberately placing college grads in open positions or taking a measured risk on someone with a degree outside of HR, and also working closely with high-potential employees throughout her career.

“If someone tries to intimidate me, I don’t get fixated on it . . . . I think there’s a way of responding without making it something it is not and move forward with the objective at hand.”

When asked about challenges in building relationships in a male dominated industry, Hay remarks, “In this and any other industry, there will be colleagues or customers who initially underestimate you based on your gender, appearance, or the function you work in. But sometimes I think manufacturing and industrial services industries get a bad rap because the workforces are primarily male: there are people everywhere, in every industry, who could be challenging for all the same reasons regardless of gender.”

When Hay has encountered difficult individuals—and she has come across some “characters” in her time—she has always tried to find a way to work with them that doesn’t jeopardize their working relationship.

“For example, if someone tries to intimidate me, I don’t get fixated on it,” Hay offers. “Something more is usually going on and, most of the time, it’s a fear of change.  I’m not going to just give way to those individuals. However, I’ll work with the person to figure out where they’re coming from and how we can resolve the issue together. I think there’s a way of responding without making it something it is not and move forward with the objective at hand.”

But now, after decades of building her skills as well as building up those around her, Hay says that she is ready for something new. “It’s exciting to look towards that next chapter in my career,” says the executive. “Looking back on my life and my career, I’m proof that you can be anything you want to be. If I had listened to my high school guidance counselor, I would be an administrative assistant right now—which is a great job, but I was fortunate enough to come across people in my life who encouraged me to do so much more.”

Airswift is a trusted international workforce solutions provider and strategic partner to Jamie Hay and BrandSafway, as well as clients across multiple industries and continents. Our team of dedicated market specialists bring a transparent approach to the challenge of sourcing permanent staff to meet the requirements of our clients.

Ogletree Deakins is a labor and employment law firm representing management in all types of employment-related legal matters. Ogletree Deakins has more than 850 attorneys located in 53 offices across the United States and in Europe, Canada, and Mexico. The firm represents a range of clients, from small businesses to Fortune 50 companies. www.ogletree.com