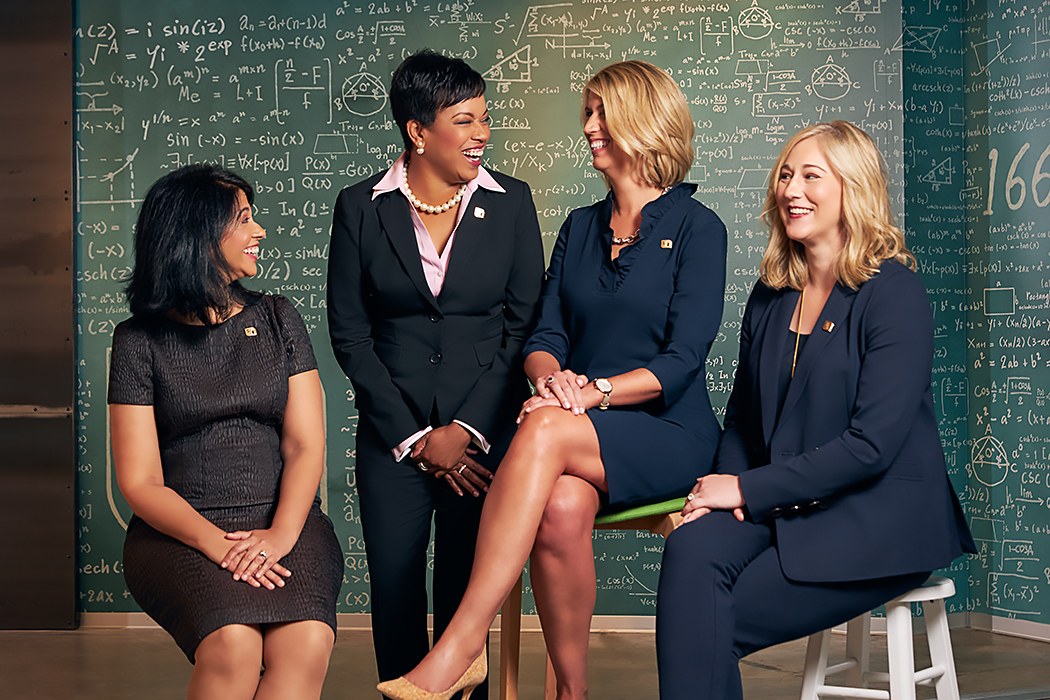 Having more women in leadership roles provides more examples of what a successful woman looks like than if there are just one or two women in the ranks. “When you have ten, twenty, or forty people and they’re all different, it gives people another idea of who a leader is,” says Hope Schall, senior vice president and deputy general counsel for regulatory strategy for Fifth Third Bank.

The Cincinnati-based bank is committed to inclusion and diversity throughout all levels; and its legal department, led by Susan B. Zaunbrecher, sets an example for both the bank and the industry at large when it comes to representation in its leadership.

“The focus on fairness and equity that lawyers love becomes somewhat embedded,” says Saema Somalya, SVP and deputy general counsel for corporate law. “I’m a big believer in stagnation as death. Just because we’ve always done something a certain way and just because power has looked a certain way in the past doesn’t meant that’s how power is going to look in the future.”

Somalya, Schall, and their colleagues J. Phenise Poole and Gwen Morris are continuing the leadership legacy of Fifth Third’s legal department through their collaboration on furthering the mission of the bank and connecting with up-and-coming leaders in and outside their department.

Morris, who is now SVP and deputy general counsel of consumer and payments, first arrived at Fifth Third from a large local law firm as a fifth-year attorney in 1999. It was a small department of six attorneys at the time, and Morris decided it would be a great fit.

“The amount of responsibility and accountability that you have at that stage in your career is much greater than I had at the law firm,” she explains. Ten years later, though she enjoyed the work she was doing, Morris returned to her former firm, was later named a partner, and continued to do work for Fifth Third.

After seven years, “I heard about an opportunity to lead a new team in the legal department,” she says. “So I came back to Fifth Third in 2015, and I have zero regrets.”

In 2018, Poole returned to Fifth Third to lead the employment law team. She had worked with Morris the first time, and there were other attorneys that were still at the bank when Poole returned. “It just felt like I was coming back home,” says Poole, who is now SVP and deputy general counsel for employment law and legal operations. “There’s just been a lot of positive growth at the bank, and so it was a very easy answer for me to come back.”

Much like Morris and Poole, Schall once worked at Fifth Third Bank, left for other opportunities, and returned in 2018. “There are only so many jobs in the world for a bank regulatory attorney,” Schall explains. “Fifth Third is an attractive bank because it’s large enough that you get to see interesting issues and feel like you’re a player in the industry, but not so large that you’re so specialized and don’t deal with top-of-the-house issues.”

Somalya, on the other hand, joined the bank for the first time in 2016. “One of these things is not like the other,” she jokes. She had spent the entirety of her career on the East Coast and abroad; moving to the Midwest was not on her radar. When the opportunity crossed her desk, it was so interesting that she realized this was where she wanted to go. Fifth Third was looking to expand the securities legal function and looking for someone with a connection to Cincinnati.

“I am always drawn to interesting stories and economic development and growth,” explains Somalya, whose husband is from Cincinnati. “Being a main-street bank in the Midwest is a really interesting endeavor. We’re very serious about doing the right thing here.”

While the four women work in different functions, they often work together, whether on a daily basis or on larger projects like the acquisition of MB Financial. “We’re independent of each other, but we’re all attuned to listening and making sure we’re identifying areas or issues so we can pull in our peers,” Poole says. “It’s rare that there is one issue that doesn’t somehow impact someone else. It’s a very good team, and we have a nice operating rhythm.”

Somalya agrees. “One of the most fun aspects of this job is how collaborative it is,” she says. “We’ve been lucky at this point in our careers to be working on issues that have multiple facets. It’s more interesting, but it also allows us to work more collaboratively and more frequently.”

That collaborative spirit extends to creating opportunities for up-and-coming leaders at the bank. When Poole was at Fifth Third years ago, she says the organization looked very different. Now the bank has more women and more people of color in leadership roles, and it’s created leadership programs and business resource groups to support the bank’s employee base.

When it comes to mentoring, all four women prefer to take an informal, organic approach. “These three ladies will tell you that I’m pretty social, especially among our department,” Morris says. “The more junior attorneys often seek me out for career advice and how to approach a situation with the clients they’re supporting. I find real value in that. If you’re just trying to connect people to each other that otherwise don’t have a meaningful connection, they’re not going to get as much out of it.”

Schall has been involved in formal mentorship programs at other organizations where you’d be paired with someone and meet every Wednesday. When the session was over, you’d never talk again. “That didn’t work,” she says simply. “You can have those programs, but it’s also about the culture, the tone, the visibility, and the access.”

And being in a department run by a woman does make a difference, she continues. “It’s that elevation of importance and visibility of the chief legal officer within the organization, reporting directly to the CEO,” she says of Zaunbrecher.

Somalya adds that there has been a lot of encouraging dialogue in the industry overall, particularly with taking a second look at how a good leader is determined. “Sports has been this historical proxy for, ‘Hey, if you can talk basketball, then you can be in the club,’” she explains. “Having a boss who doesn’t require you to be good at basketball in order to opine on whether an acquisition is going to be lucrative is refreshing.”

One of the things Zaunbrecher instituted when she joined Fifth Third was a quarterly meeting with other women in the bank’s law department, Poole says. And every woman is welcome. “She has intentionally created these opportunities for us to just get together and talk about things that are unique to women,” Poole says. “Sometimes it’s about what we do in our day-to-day lives as employees and sometimes it’s just what do we need as women from each other and what she or the organization can do to help support us.”

“As I’ve said to Susan [Zaunbrecher], the talent, diversity, drive, and collegiality she fosters is very impressive,” says Greg Lyons, a partner at Debevoise & Plimpton. “These are terrific lawyers who promote the bank and each other.”

With the support of Zaunbrecher as well as the bank, Poole, Morris, Somalya, and Schall are helping create a new normal for legal departments across industries.