Vered Yakovee thrives in the culture of diversity at the Miami Heat, and relies on the strong network of the Sports Lawyers Association, in her role as vice president and associate general counsel for the team

She grew up in Greece, annually serves as a professor of Sports Law for LLM students in Spain, and has multicultural parents, so when she came to Miami to meet the Heat staff for the first time, Vered Yakovee felt right at home amidst the diversity she found.

The city of Miami is home to so many cultures, and the Heat staff reflects its community. Among the effects of that diversity is that the Heat staff has a full range of ideas and talents, which results in creative business outgrowths, such as an in-house apparel line and robust retail operation that generates significant revenue while promoting fan interest and engagement. In her fourth year as vice president and associate general counsel for the Miami Heat and AmericanAirlines Arena, Yakovee reflects on the special culture of the organization, the unique work it does, and the extracurricular professional activities she undertakes to stay prepared to adequately support her colleagues’ innovation.

Yakovee says she is uplifted by working in what she describes as kind of a post-modern environment.

“I’d bet that for everyone in the company, there is someone they can see themselves in and that they can look up to,” she says. “I know that is true for me. I see women who remind me of myself in different stages of my career, and I see women who I want to emulate.” In addition to these women, Yakovee also notes that she works with many men and people who are different from her in other ways that she admires for various reasons, from their business acumen to their leadership skills.

The genesis of the Heat culture was a desire on the part of the organization to truly reflect its community, and that mission is apparent, as the senior staff of the Heat business operations includes leaders who are women, African American, Hispanic, Middle Eastern, Jewish, and LGBT. The Heat’s full-time staff consists of 70 percent minority and 30 percent female employees. In January 2018, that culture was recognized when the Heat received the NBA’s inaugural Inclusion Leadership Award for its history of, and commitment to, inclusion. 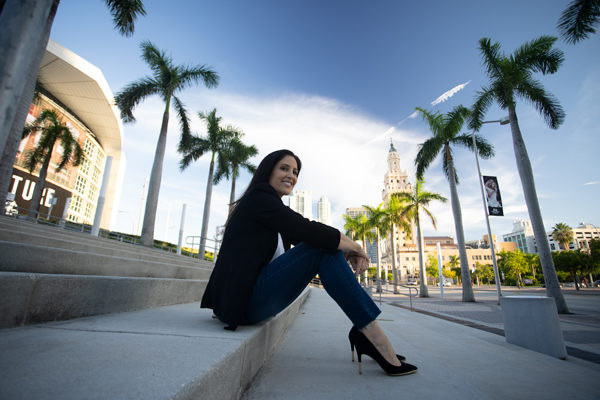 Yakovee doesn’t take that culture for granted, and folds it into everything she does—seeking mentoring, serving as a mentor to others, broadly interviewing candidates for open positions, and trying her best to be a consistent example of the culture she espouses. That extends to how she works with outside partners as well.

“In addition to being a substantively excellent member of the Heat legal team, Vered is one of the most thoughtful, loyal, and empathetic people with whom we have the pleasure of working,” said Christopher Keefe, a corporate partner at the law firm of Nixon Peabody LLP who regularly partners with Yakovee and the Heat. “She has made a well-run and engaged organization stronger through her commitment to inclusion and outreach. We are proud to be part of her team.”­­

Yakovee recognizes that many benefits flow from working with colleagues with different backgrounds. For example, she has by happy accident become an apparel attorney. The Heat has a robust creative department, which designs T-shirts and other apparel, reflecting a broad range of experience with organizational history past and present, as well as the culture and history of the city of Miami.

These ideas and the team’s designs organically evolved into a recognizable style and then into a brand, Court Culture, that is now the in-house label of the Heat. While she thoroughly enjoys the work that is more traditional for a sports franchise, she is also inspired by the nontraditional legal work that arises.

“The creative department personifies the inclusiveness of our company,” Yakovee says. “Our creative team comes up with things that reflect every pocket of our community. Frankly, as a Miami transplant, those T-shirt designs are more than just cool; I actually learn a lot from the meaning behind them.”

During the 2017-18 NBA season, the success of the creative team collided with another notable aspect of the Heat, its retail business, when Nike collaborated with the NBA and each team to design “city edition” uniforms. Yakovee had already worked closely with the consistently NBA-leading Heat retail department by supporting it in connection with its stores online, in the Arena, at the Miami International Airport, and at the Dolphin Mall.

Still, Yakovee explains, the Heat City Edition campaign, a throwback to the era when the Heat was established, took the retail operation to another level. The fuchsia-and-blue nostalgic campaign incorporated elements of the old Miami Arena and 1980s Miami and was a huge commercial success, outselling all of the other twenty-nine teams combined.

Alongside her work with the Heat, Yakovee is also a member of the Sports Lawyers Association, an organization she’s been a part of since graduating law school and that she credits for providing countless professional resources.

The SLA was established in 1975 by a handful of lawyers—mostly agents—in an effort to establish a forum in which cordial labor-related discussions could take place. Forty-five years later, the SLA has grown to a couple thousand members, but still maintains a communal feel and provides a forum where the likes of league general counsel and players’ union representatives can exchange ideas while also educating their many peers who come together for the annual conference.

Yakovee gradually became part of the fabric of the SLA through outreach volunteerism, research projects, and eventually her current service on the board of directors and as secretary. Having served in the latter two roles through five years and three SLA presidents, she mentions with nostalgia that the current president-elect is the person who told her about the SLA sixteen years ago, and in looking forward to working with him, she also has a sense of things coming full circle.

Although the benefits of the SLA include such nostalgia and the camaraderie among friends made over the years, they also extend to substance. Aside from being a fun excuse to see friends from all over the country and beyond, the annual conference provides an overview of various legal issues facing the collegiate, Olympic, and professional sports worlds. Yakovee admits that the first time she attended, she was overwhelmed and probably could not understand or recall any of it. However, after attending year in and year out, somewhere along the way, the benefit became apparent.

“It’s like going to the gym—the first time you go, you don’t see results,” she says. “But if you go to the gym for fifteen years, one day you’ll wake up noticeably stronger. Over time, I developed a broad perspective of the issues that are critical to lawyers in this industry. That knowledge base helps me be the best lawyer I can be for the Heat.

“It gives me the frame for the jigsaw puzzle, so to speak,” she continues. “When I’m out in the legal world and I see a puzzle piece, I know where to put it. I have the framework now.”

In other words, when her colleagues start clothing lines and operate successful retail chains, she can pivot to the right area of law and work alongside them.

That creativity, born from the diversity and inclusiveness of the organization, is something that Yakovee appreciates, but does not consciously think about every day. Living it and perpetuating it have become second nature, just like seeing those palm trees around the Arena that make every day feel like a vacation, even while everyone is hard at work inside. ­­

Pasich LLP helps our clients reduce and transfer risk, and recover full value from their risk management assets. Whether it be risk review, insurance claim submission, litigation management, or the pursuit, when necessary, of arbitrations, lawsuits, and appeals, we help clients navigate tumultuous legal and business issues.

The X’s and O’s of an HR Strategy

An Ambassador for Inclusion