Debbie Harsh shares how it was a leap of faith that led her to CenterState Bank, and why it’s the strong culture of the company that has reinforced her decision

When Debbie Harsh began her career in the banking industry, she didn’t imagine that she would one day play a significant role in carrying out the cultural groundwork of an entire organization. 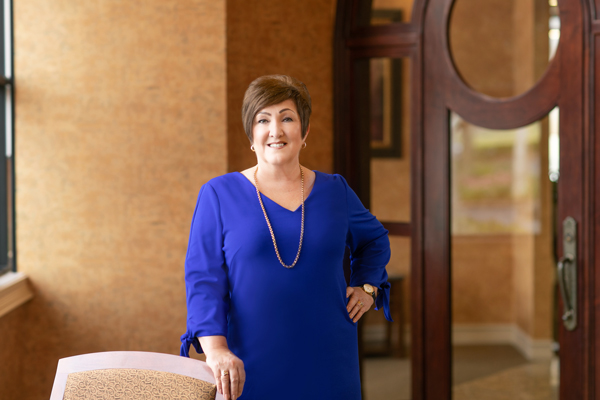 “I started my banking career as a teller and, by now, I’ve pretty much served in every area of the bank, exclusive of the bookkeeping and accounting department,” says Harsh, who today serves as senior vice president and chief culture officer for CenterState Bank based in Winter Haven, Florida. “I’m also very involved in the community here, which supports the core values of the company. I grew up in Winter Haven, attended the local community college, and I have lived here all my life. So, change is not something that I do often. I like stability.”

But after dedicating seventeen years of service to a previous bank, which underwent several name changes along the way, she found herself faced with a career-altering opportunity. “The president of CenterState Bank called me and said, ‘Debbie, I don’t know what will happen to the bank where you work now, but I’m sure a major bank will come in and acquire that bank, and you’ll probably be fine. However, at CenterState, we’re going to be growing over the next few years. We’re looking to build a team, and you’re someone we think we’d like to have on that team,’” Harsh recalls.

At first, Harsh was unsure if it was an opportunity she would be able to seize, but an unlikely series of coincidences convinced her it was the proper path to pursue. “There was a real struggle going on inside me,” Harsh explains. “I’d worked with these people at the bank for so long, watched them have children, and watched those children grow up. They’d become like family to me, so I didn’t know if leaving was the right thing to do.”

That inner struggle was compounded when Harsh’s bank offered her a promotion if she stayed with the company. After CenterState reaffirmed that it was still interested in hiring her, Harsh was no closer to making a committed decision. That’s when she attended a chamber of commerce women’s luncheon, and the guest speaker was discussing why change is good.

“That Sunday after church, my family and I were headed to lunch, and my daughter calls me and says, ‘Mom, did you pass the CenterState Bank location?’ She responded, ‘pay attention to the marquee.’ As we are passing, I look up and the sign reads: ‘We make the change easy.’ I wasn’t looking for writing in the sky, however, this was pretty close. In my heart, I just knew that this was the direction I should go in,” Harsh says. “I called the president, said I was ready to make that change, and joined CenterState.”

Today, CenterState has grown to 107 branch locations with roughly $12 billion in assets, and Harsh finds herself ideally suited to help the bank harmoniously integrate its values into each of the communities it serves, as well as the lives of its employees.

“To me, culture is about nurturing and fostering those values that the bank was established upon,” Harsh says. “It’s about caring about our employees, their families, the communities that we serve, and making them feel appreciated for what they do.”

As the chief culture officer, Harsh and her team have implemented a variety of initiatives to help CenterState adhere to its goals of being local market-driven, incorporating world-class service, forming real relationships with customers, and focusing on faith and family.

“We’ve made around two acquisitions per year, which can be quite labor intensive,” she says. “That’s in addition to running the day-to-day operations. So, we want the people working in the backroom support areas as well as the front line and their families to know they are appreciated for their commitment and the time constraints placed on them.”

In fact, the CenterState Bank executive team recently provided employee breakfasts and lunches in some areas to the company’s support staff, where the executive team serves those employees. “When they went through the line for food, the CEO of our company was actually putting a spoon of potatoes on their plates and saying, ‘Thank you. We truly appreciate the service you deliver to the company and to our customers,’” Harsh continues.

Harsh and her team also recognized that they needed to know what employees thought and felt about their work experience, so they implemented a company-wide culture survey to gauge employee’s thoughts, needs, and suggestions. Harsh says the team wanted to get a benchmark of where the staff was in terms of feeling valued at CenterState. Then, they broke the survey down into different segments such as human resources and training area, operations and backroom support area, as well as the millennial committee.

“We felt like the survey could paint a true picture, from a culture perspective, of where we want to go as we want to build a culture where employees are lined up saying, ‘I want to work for CenterState Bank,’” Harsh says.

Additionally, Harsh’s team is working to produce a series of cultural videos for the company. “We want our teams to see our core values visually and in action by our leadership team,” she says. “We’ve brought together various people from throughout the company who live, walk, talk, and breathe our core values. These videos will be used in various ways to drive home what our values are and how we live them out.”

Harsh is also helping to instill the importance of community involvement by encouraging employees to participate in local nonprofit programs such as Meals on Wheels, which delivers prepared meals to shut-ins within the community. Weekly, Harsh explains, CenterState allows employees to take an hour and a half lunch period to deliver these meals.

“One of our employees from a newly acquired bank loves this program, and during the summer she brings her son with her to deliver the meals, which creates a sense of pride for him,” Harsh says. “It’s also helping them create a family bond together. To me, that speaks specifically to our focus on faith and family, and that’s how we know our process is working.”

The company has also established an internship and mentoring program for college students. Teams from CenterState Bank will go to campuses to recruit for a twelve-week program that takes place over the summer. Students work for a few days in various areas of the bank, as well as attend board meetings, work with tellers, shadow branch managers, and work in the marketing department. Harsh says CenterState is looking to provide aspiring business and finance students with the opportunity to apply the lessons they’ve learned in their curriculum in a business setting.

“The idea is to attract the next leaders of our company, and by giving them a firsthand experience of our culture and community, we’re hopeful that some of these students will come back to become a part of our environment here at CenterState Bank,” she says.

Panasonic Plugs in to M&A