Paul Maher, a technology and leadership executive who has worked at companies of various sizes in the United Kingdom and United States, has been involved in building some of the largest cloud solutions in the market today. 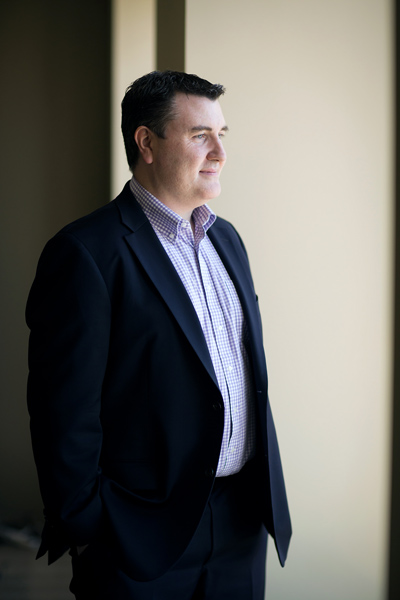 “I was born on the cloud, if you will,” Paul Maher says, with a laugh. “I grew up around the cloud.”

He’s not claiming to be an angel, though; Maher is talking about his role in developing cloud computing solutions. He’s been involved from the early days—when the cloud was very immature—to the ubiquitous cloud platforms that exist in today’s market.

At the time of writing, Maher is transitioning to a new role at Microsoft, where he we be building out and leading a new team. The article will focus on his most recent role, when Maher was a principal and chief technology officer of Milliman’s Life Technology Solutions practice. Milliman is one of the world’s largest independent actuarial and consulting firms, and Life Technology Solutions provides products and services related to financial modeling and risk management to life insurance companies worldwide. At the core of its business is Integrate, a state-of-the-art, cloud-based financial and risk management platform.

Maher came to Milliman from Microsoft, where his life in the cloud started. “Not many people have had the opportunity to gain the depth and breadth of experience in cloud computing that I have,” he says. “I have been doing this a long time.”

In fact, Maher joined Microsoft UK in 2005, when the commercial cloud was still nebulous. Maher’s computing skills, however, were not. Before landing at Microsoft UK, the Liverpool native and university math and statistics student was already indulging a fascination with computers. “We had a personal computer at home, and when my opportunity came at university, I took some computer science classes, which I quite enjoyed,” he says.

Looking to use his math degree but also wanting to move into the computer space, Maher found a job programming for an actuarial company in his hometown, which was a natural fit, considering his background in statistics. Maher then worked for several other companies, including KPMG and Thomas Cook, honing his software engineering skills and adding management and leadership roles to his resume.

While at Torex Retail, Maher focused on research and development. “We were looking to push forward with next-generation products,” he says. In that position, Maher worked in partnership with Microsoft UK to develop innovative solutions for retail, using Microsoft’s next-generation technologies.

One of those new emerging technology platforms was cloud computing. “The cloud was happening quickly,” Maher says. “Starting around 2005, one of my first roles after joining Microsoft was talking to analysts, championing the vision of the cloud as the next big thing. I worked with the Microsoft product groups, understanding their cloud strategy and helping provide feedback on early pieces of the Microsoft Azure Cloud platform. We were painting the picture of ‘Why cloud?’ to the market. All the pieces weren’t built yet, and we were putting the engineering in place.”

Maher quickly became one of the cloud’s biggest believers. “I could see what the cloud could provide and how it could help solve common, yet complex, problems,” he says. “It enables computing at a scale never before possible and brings the cost of computing down. Cloud really helps bring CAPEX cost down, which was previously invested in infrastructure and hardware.”

In fact, Maher still describes himself as a cloud evangelist. “That comes from hearing the cloud vision early on,” he explains. “I have been fortunate enough to work with companies worldwide to build large-scale cloud solutions and seeing the value of those solutions—how they can make people’s lives easier.”

A Footballer at Heart

Having been a soccer player in his youth, Maher once had the goal to become a professional “footballer.” He gave up his dream of becoming a professional athlete, however, when he got the opportunity to go to university. “It was a reality check on whether I would make it,” he says. “I played at university for a while, but, in the end, I went with education.” And though he ended up working in the tech industry and not on the field, he still plays occasionally and even returns to England to play social games with old friends.

In 2008, Maher moved from the United Kingdom to Microsoft’s US headquarters in Redmond, Washington. Milliman was one of the partners his team worked with to advocate early adoption of Microsoft’s next-generation technologies. At Microsoft, he worked closely with Milliman on its move to the cloud and got to know the team.

In 2013, he thought the time was right for a new opportunity, and Milliman provided him with exactly the type of opportunity he was looking for.

“I felt like I had a mission: I wanted to build a large-scale cloud solution that would change an industry,” Maher says. The transition from Microsoft was so smooth, that he left on a Friday and was back in their offices the next week representing Milliman, which made everyone feel positive about the move.

In his role at Milliman as chief technology officer responsible for product development, Maher drove product strategy and execution through his immediate mixed-discipline team. His team included some of the top developers in the world. Building solutions in the cloud provides access to near-unlimited computing resources to perform computeand data-intensive, mission-critical work that was never before possible, all in a payas-you-go pricing model.

As someone who led a team that was changing Milliman’s business foundationally, Maher took a detail-centric approach, while remaining hands-off and trusting the internal leaders on his team. However, it’s easy for him to have that trust, because he strives to hire the right person for the right job. Maher sets his team members up for success by removing obstacles and providing everyone with the right tools.

“It is all about empowering people,” he says. “With experience, you understand what is required based on the maturity of the team. To build an empowered team, I act as a coach and stay empathetic to what people need. For me to be successful, it’s about the team being successful.”

With his extensive cloud experience, Maher continues to be in popular demand for consulting and public speaking. And, as a cloud evangelist, he’s the perfect person for the job.

Editor’s Note: Paul Maher joined Microsoft in September 2017 as general manager of the newly formed Industry Experiences team. In this role, Maher will be leading a team focused on working with Microsoft industry customers and partners and using the Azure cloud to enable digital transformation to solve their critical business problems. You can follow Maher on LinkedIn: www.linkedin.com/in/pauljmaher

Greg Klaben Sees Investment from Every Side