As the founder of ChinaWise, a business advisory firm, Jing Cesarone not only successfully links Chinese and American businesses, but she also inspires entrepreneurs everywhere. Now, she’s helping to further make those connections with entrepreneurs as the president of Z.H.island International (USA).

There’s no single way to define Jing Cesarone, and even a lengthy list of adjectives only begins to scratch the surface. A few traits, though, are immediately apparent: driven, resilient, and tenacious come to mind, and Cesarone herself would also be quick to add “dramatic.”

“I’m a very quick-action person,” Cesarone says. “If I decide to do something, then I do it right away.”

But if there is one phrase that could define her, then it’s the one she read every day in her high school dormitory in China inscribed above her double-deck bed: “Where there is a will, there is a way.” It’s a phrase she has carried with her throughout her personal and professional life. From finishing second in her province out of 100,000 students to earning a full scholarship to the University of Illinois to working with Fortune 500 clients, it all culminated in 2001 when Cesarone founded ChinaWise—a leading business advisory firm headquartered in Chicago that helps North American and Chinese enterprises generate business together.

Growing up in China and having lived in the United States for twenty years, Cesarone has tremendous experience in understanding the cultural differences of each country. She also has a great deal of proficiency working for companies in each country, including China Daily, Siemens, and Xinhua News Agency. As a result, Cesarone saw the opportunity to help introduce Chinese businesses to North America that she knew wanted to expand their global reach. That ambition led to the founding of ChinaWise.

One of the keys that separate ChinaWise from other business advisory firms is not only the company’s cross-functional expertise and engagement, but also its ability to form real connections for business transactions. Another crucial aspect of that is understanding the cultural differences between North American and Chinese businesses.

It’s navigating this cultural mind-set, Cesarone explains, that other business advisory firms tend to overlook. Cesarone says that while American business decisions tend to be made based on marketing trends and data, China is more relationship-driven. “They have to know you personally for quite some time, know your integrity, and then they will start that relationship,” Cesarone explains.

To help align those differing mind-sets, Cesarone goes well beyond acting as a bridge between businesses in North America and China. Instead, it’s her devotion of time, commitment to every detail throughout the process, and creating a scenario that is mutually beneficial to both parties that are the key differentiators.

“You can be a bridge, but you don’t know what happens afterward, so I’m a part of the team,” she says. “That’s what drives both sides to meaningful collaboration.”

Cesarone has been a team leader for a number of international projects. She successfully led the market entry in China for Canada Wild Blueberry products and has licensed more than five hundred hours of video content to Chinese television stations and media companies. Additionally, she helped a US publicly listed retailer, Build-A-Bear Workshop, enter the China market.

To this day, one can almost guarantee that if an opportunity to promote cross-cultural interchange emerges, Cesarone will be there. She organizes the annual Omaha Dialogue, which brings together hundreds of acclaimed Chinese and American business leaders to discuss investment strategies. She’s launched a partnership with the CDA Council to start a pilot program in China to analyze and understand China’s early education program, as well as introduce Child Development Associate Credential to early educators working with children from birth to five years old.

Additionally, she founded the UEnjoy Club to help inspire and empower women, has won the Corporate Woman of Achievement Award from the National Association of Women Business Owners (NAWBO), and served as diversity director for the Chicago chapter. She is the chief advisor for POWER Beijing, and she moderated a panel on the importance of work/life balance. She also organized a conference at the United Nations’ headquarters on sustainable development, stressing to attendees to “leave today with a better understanding of the relationship of business and sustainable development, and with a renewed sense of commitment towards our planet, each other, and future generations.” 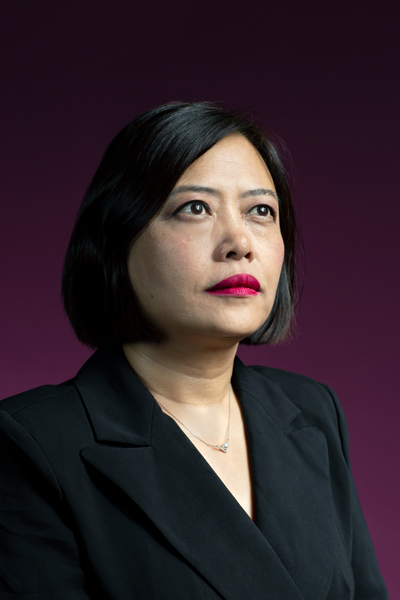 With that tireless work ethic, Cesarone has further exemplified her commitment to strengthening networking between China and North America with Z.H.island, an exclusive invitation-only network for business leaders and senior executives. The organization includes more than six thousand core members, and the total business revenue of Z.H.island members is equivalent to 16 percent of China’s GDP. Founding members include Jack Ma, founder of Alibaba; Liu Chuanzhi, chairman of Lenovo; and Wang Jianlin, founder of Wanda Group.

Recently, Z.H.island launched its US operation, Z.H.island International USA, with the goal of connecting US entrepreneurs and business leaders with the most impactful business network in China. Cesarone, who is now president of Z.H.island International USA, says over the past seven years there has been an increasing number of Chinese companies coming to the United States. As a result, creating a link between companies is essential, especially with the emphasis China places on building strong relationships.

“They need to learn from each other, and most importantly they need to help each other to think more clearly, to be more strategic, because they are all entrepreneurs who think alike,” she says.

Cesarone now has her sights set on growth for the network in the United States. The first initiative is to encourage initial members to build nationwide networks of entrepreneurs who are interested in doing business with China and building relationships with Chinese entrepreneurs both in the United States and in China. Next, Cesarone says it’s about truly working with members to facilitate collaborative business deals.

“It has to be something concrete, meaningful, and business-result oriented,” she says. “As Z.H.island entrepreneurs, that’s who they are. That’s why it’s a very good fit for the culture. So, I need to find similar entrepreneurs on the US side to connect them together. They are business-driven, they are business-focused anyway, so that’s a very similar culture. That’s why I naturally fit into this platform. It’s not a loose networking platform. It’s a get business done, get deals done platform.”

Much of that ingrained mind-set comes from Cesarone’s own upbringing and her “where there is a will, there is a way” mantra. For entrepreneurs, she says, success comes from within—something she discovered early on from her own personal growth, dedication, and persistence in building a learning community through shared best practices and success stories.

“It’s not easy to do it by yourself,” she says of starting a business. “By building the group together, you can forge ahead. Someone who is not an entrepreneur will never understand that entrepreneurs truly love what they do, and they are passionate about it. I truly enjoy every minute of it. When I have difficulties, I enjoy the challenge. If I don’t have a challenge, I won’t be excited.”

The Delicate Balance Between Work and Life

Jing Cesarone says that while many may see her as working nonstop—be it in the office or via business travels—she will be the first to stress the importance of work/life balance, especially with three children between the ages of ten and fourteen.

She makes sure to set boundaries between work and life, and she also delegates both at home and at work. Additionally, she takes care of herself spiritually and physically, as she spends time with her family and enjoys swimming, writing, and reading, which she encourages other entrepreneurs to find for themselves in enjoying a life outside of work.

She’s spoken routinely about the topic, including at the women’s leadership event in Chicago, Power: Opening Doors for Women, as well as in China at the inaugural POWER Beijing program. In China, the culture has just started shifting in recent years to focus more on the importance of work/life balance. In fact, at a recent Z.H.island conference in China, entrepreneurs identified three major topics Chinese entrepreneurs are facing, and the first was how to achieve work/life balance.

Cesarone says there are different stages when work/life balance varies in value, and when her children were younger, she spent all the time she could with them. She also credits her husband for supporting her when she started ChinaWise, as well as their outstanding teamwork in both taking on any challenge—be it in business or in life.

“I think to build a system of family and work, you have to have good people supporting you as a team,” Cesarone says. “In work or life, you need positive energy.”

The Latest Approach to Meaningful D&I