As a tax executive at one of largest independent broadcasting companies in the United States, Rebecca Riegelsberger knows that philanthropy can save both money and, more importantly, lives 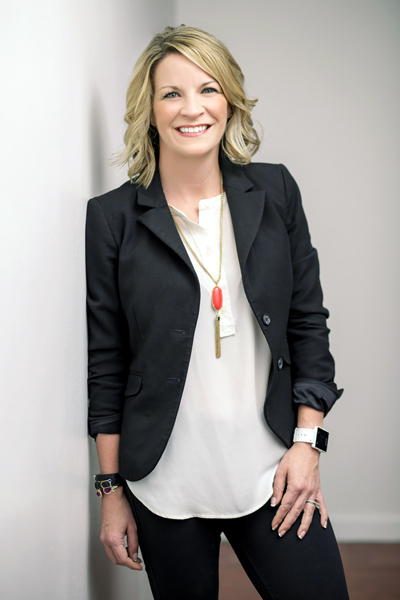 At thirty-seven years old, Rebecca Riegelsberger has already earned a vice president role at a national media company, delivered twins, beaten cancer, and joined three boards of nonprofits in Cincinnati. The vice president of tax and treasury operations at The E.W. Scripps Company—known for its thirty-three television stations, thirty-four radio stations, and national digital brands—has homed in on the company’s philanthropic mission to expand the revenues and impact of charitable organizations close to her heart. In her nonprofit work, she embodies the company’s saying, “We do well by doing good.”

“There’s an expectation in the company that you are doing good for your community,” she says. “It helps to have the support of the company, and my family’s support is very important, too. You have to be proactive, and I think people would be surprised about how many opportunities or resources are available once you start looking for them.”

The company’s philanthropic arm, the Scripps Howard Foundation, empowers journalists who inform and shine a light on impactful stories and supports community programs that change lives for the better. The foundation gives to local literacy campaigns for families in need, food pantries, heroin addiction centers, and more. In addition to grants, the foundation matches individual donations up to a certain amount, and each employee can apply for up to $2,500 each year in volunteer gifts for organizations he or she supports. Employees at the home office can also take advantage of the volunteer day where the company will pay them their standard wages for a day spent working at a registered nonprofit.

That community-oriented culture was what attracted Riegelsberger to the company. When she arrived in April 2015, Scripps was going through a major transformative transaction, spinning off its newspapers and doubling the size of its broadcast markets. Her challenge was to create and develop a tax department to manage all direct and indirect income tax compliance, accounting, planning, and reporting.

“There’s an expectation in the company that you are doing good for your community.”

As someone who thrives in high-stress situations, it was a busy time that fueled her professional drive. However, her mind-set shifted in July 2015 when she found out she had cervical cancer. She took time away from work for the surgery and recovery from the noninvasive cancer. “The situation forced me to put things into perspective and not stress about the day to day,” she says.

Riegelsberger’s commitment to philanthropy, however, dates back to 2011. At the time, she felt secure in her career and started to think about how she could give back. She had earned her bachelor’s degree in business administration and an MBA in accounting at the University of Cincinnati before working in tax departments at Duke Energy Corporation, Senco Brands, and Scripps. She thought volunteer work was the right thing to do, but she didn’t know how to get involved. She searched VolunteerMatch online and decided to join a volunteer day at the American Diabetes Association. Riegelsberger enjoyed the event so much that it compelled her to do more.

In February 2012, she began to focus her passion for giving back on a primary cause after she gave birth to her twin daughters nearly eleven weeks early. Her daughters, Emmy and Claire, were small, weighing three pounds and two pounds, respectively. Both stayed in the hospital for more than six weeks before coming home. At eighteen months, Claire underwent heart surgery.

So when she spotted flyers for the March of Dimes, a nonprofit dedicated to ending preterm birth and other complications that threaten infants, she felt called to take action. The organization’s campaigns find genetic causes of preterm birth and support education for medical professionals and the public about best practices for expectant mothers to prevent infant fatalities.

In the 1990s, through research funded by the March of Dimes, scientists specifically developed surfactant, also known as surface-active agent, which is a compound premature babies such as Riegelsberger’s daughters lack in their lungs. It increased her girls’ chances of survival by more than 50 percent, and widespread use of surfactant has diminished the death rate from respiratory distress syndrome thanks to the nonprofit’s research investment over the past decade.

“I’ve seen what the dollars can do, and it really is life changing,” she says. “If the girls had been born before the early 1990s, their chances of survival literally would have been less than half of what it was. And now, at five years old, they are healthy, funny, beautiful, and smart—all those great things that moms say about their children.”

She met with the March of Dimes executive director and had breakfast with the board chair to find out how to get involved in a leadership capacity. After sharing her story, the board voted her in as vice chair of the Cincinnati/Northern Kentucky Market board in August 2014. This year, she will assume the role of chair. She oversees the nominating committee, volunteer engagement, and strategic planning, which has resulted in successful events such as the annual Signature Chefs Auction.

Every fall, the auction features signature dishes created by culinary talent at local restaurants, in addition to corporate sponsorships. In her first year, Riegelsberger leveraged her story to expand support with family and friends, as well as her connections in the corporate world. As a result, the event has doubled in revenue and in size, growing from three hundred to six hundred attendees.

“Being in the corporate world, I quickly understood that prematurity impacts one out of ten babies in the United States, and it has an $11 billion impact on businesses through medical costs and lost productivity,” Riegelsberger says. “I have a personal connection to it, but everybody stands to benefit from ending prematurity. Both dollars and, more importantly, lives can be saved.”

In July 2014, she found another cause close to home, this time geographically, through a board agency. The nonprofit, UpSpring, provides education to children experiencing homelessness in Cincinnati, where half of the region’s children live in poverty. Riegelsberger, who was born and raised in Cincinnati, learned of the correlation between infant prematurity and socioeconomic status. Initially, she joined the organization as treasurer, but she is now on the internal committee, programs committee, and events committee as a board trustee.

As a part of UpSpring’s board, she participates in the committees that determine policies and manage personnel to help the nonprofit assist the more than 3,500 children it serves each year. One of UpSpring’s flagship programs is a free, seven-week summer day camp, UpSpring Summer 360. It provides literacy and math lessons as well as transportation and meals for at-risk students between the ages of five and twelve.

“I think all children should be starting out at the same level and not be behind,” Riegelsberger says. “UpSpring supports them and their parents with childcare at the summer camp so they can continue to work to provide for their family.” For the second year in a row, the Scripps Howard Foundation has also contributed a significant grant to the program as well as volunteers to serve a hot lunch to the UpSpring camp. The organization has grown significantly during Riegelsberger’s tenure, and it now serves the most children in its history.

Yet Scripps’s tax leader didn’t stop there. This past July, she joined the board of Flywheel, a social enterprise geared to match nonprofits with customers, talent, and capital. Its consulting services have connected more than fifty social entrepreneurs with resources—from legal to marketing to bookkeeping to technology services and more. Flywheel’s consultants and business mentors help turn nonprofits into profitable, autonomous businesses to accelerate their impact on the community, and Riegelsberger says she couldn’t be more excited about it.

“Cincinnati is a big technology hub; we have a lot of start-ups that come here,” she says. “And while it’s a philanthropic city, there is a finite amount of money to go around. Flywheel enables nonprofits to become self-sustaining so more good things can happen.”

Above all, Riegelsberger enjoys making connections and encouraging other executives to make a difference outside their departments, even if it starts with one hour or one day focused on giving back in the community. “At nonprofits, I work with people of all different backgrounds,” says Riegelsberger, who hopes to be a positive role model for her daughters. “It’s really given me an appreciation for different approaches, and it helps me to keep an open mind to empower everyone to accomplish so much more.”

Safety Knows No Boundaries at UL