The trend in telecommunications today is consolidation. Large corporations buy up small companies, hoping to crop costs and shrink the competition. But to John Feehan, bigger infrastructure is not necessarily better when it comes to benefiting the consumer and managing a successful business. 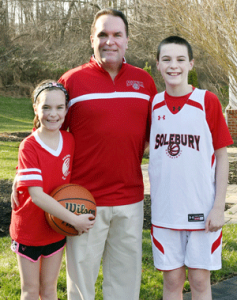 Off the Clock with John Feehan

When Feehan isn’t working, you can find him on the court coaching his son’s team in youth basketball.

“A lot of times in life you’re going to win and lose as a team—not always as individuals. That’s something you need to know how to do. It’s more satisfying ultimately to win as a team and share that with a team, than to do well by yourself and have the team lose around you,” Feehan says.

“It’s not about whether they become the best basketball players or soccer players but about learning the fundamentals of how to compete, how to be a good teammate, how to support the team, and how to listen, take guidance, and just get better.”

Feehan began his career as a certified public accountant for Pricewaterhouse, where he soon discovered the position wasn’t his ultimate goal. “It was a good starting point for me to get my feet wet,” he says. “And I liked it because I got the chance to see a lot of different types of companies and industries—both large and small—as we were doing audits and advisory services.”

Feehan wanted to explore those industries and learn how to manage companies rather than simply audit them. Through the early part of his career, he cultivated his urge for exploration and worked in myriad industries including manufacturing, high-tech software development, pharmaceutical distribution, electrical distribution, and the service industry, gathering valuable leadership techniques along the way before eventually finding himself in telecommunications.

In 2001, when fledgling wireless provider Virgin Mobile USA was seeking its first finance department hire, a former colleague tapped Feehan for the job. He came aboard as senior vice president of financial operations. From there, he ascended the ranks to CFO and led Virgin Mobile USA’s initial public offering in 2007.

And it did. Under his financial leadership, the company grew to become one of the top wireless carriers in the US, boasting revenue in excess of $1 billion and a customer base of more than five million subscribers. When Sprint/Nextel acquired Virgin Mobile USA in 2009, Feehan stayed on as CFO. But after a year in the position he found himself longing for greater challenges. “I wanted to get back to a pre-IPO or a private company that was growing, and I wanted to start again,” Feehan says.

In his current role at Patriot Media Consulting, Feehan has managed to do just that. A small company with thirteen employees, the culture is characterized by team interplay and a highly cooperative work environment. “While we have our roles, they’re not boxed roles. We’re all businesspeople, and we’re all intimately involved in every aspect of the company,” says Feehan of the executive team. “So while I’m the finance person—the CFO—I am just as involved in everyday operational issues of the company as the chief operational officer and CEO are involved on a daily basis with the financial issues.”

Patriot Media Consulting’s tight-knit executive team does not, however, restrict its properties from operating with the freedoms often associated with startup companies.

Currently, those properties include RCN, a cable company operating in multiple market’s along the east coast as well as Chicago, and Grande Communications, a Texas-based telecom provider.

Granting local offices the freedom to make operational decisions as close to the customer as possible is at the core of Patriot Media Consulting’s formula for success. “If you take care of the customer, everything else takes care of itself,” Feehan says.

And while it may seem counterintuitive to steer a property toward new growth by loosening the corporate reins, Feehan believes this is what truly effective leadership is all about. “My management style is to empower the people who work with me and to allow them to make the decisions they need to make in order to be successful,” he says. “Hire good people and then get out of their way so they can do their jobs.” Feehan believes his responsibility is to provide employees with a general framework, necessary support, and a clear direction consistent with the goals of the parent company.

Employees may make mistakes or organizational decisions that Feehan wouldn’t necessarily make, but that’s all part of the learning process that enhances an employee’s decision-making capabilities. “If you hire good people and you trust them and believe in them, and give them the guidance that they need, nine times out of ten they’re going to make good decisions and do good by you,” he says.

As for advice to aspiring leaders in any industry, Feehan says, “Speak up. You will learn more from getting your opinions out there and allowing other people to hear them—and comment on them—than you will by keeping them inside.”

At Home With New Trends

Waste Not, Want Not