Tom Schuetz’s father taught him to have an excellent work ethic, but he was born with an itch for new ideas. Always watching for what’s coming around the bend—both in technology and in his career—Schuetz grabs hold of every good opportunity and squeezes it for all the knowledge, experience, and adventure it’s worth. It is his motivation to seek out the next challenge that has propelled him through more than twenty-five years of developing game-changing IT systems for a variety of retail companies.

As a programmer and analyst for Macy’s, Schuetz modified the credit card system to enable the department store to accept Visa and MasterCard. At MAY Department Stores, he consolidated data centers and introduced standardized IT systems for all eight operating companies to reduce costs and bring operational consistency. And after a stint with Deloitte Consulting (ICS) in its SAP Retail practice, Schuetz found his way back to department stores.

He arrived this time by way of National Realty and Development Corporation Equity Partners (NRDC) acquisition of Lord and Taylor as part of the Macy’s and MAY Department Stores merger. Bringing his experience full circle, Schuetz separated Lord and Taylor’s systems from Macy’s and set up a data center and development team—call it value through creative destruction. Then NRDC acquired Hudson, and it was time again to consolidate data centers and software across the two operating companies for efficiencies.

In 2001, Schuetz got a call from the then-CEO of Sunglass Hut who asked him to interview for an IT leadership role at Luxottica Group, a leader in premium, luxury, and sports eyewear. It seemed that his experience in system development and transformation made him a great candidate, and after a six-month interview process, Luxottica offered him the position of chief technology officer instead—a brand new position with a major change imperative: the global outsourcing of data centers to Hewlett Packard. Schuetz’s first responsibility would be to help consolidate all of Luxottica’s data centers in the Americas and Australia to Hewlett Packard data
centers in Atlanta, Georgia. 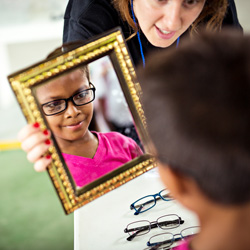 In 1988, Luxottica founded OneSight, a charity that has since provided eye care to more than nine million people in forty-one different countries. “We hold more than a hundred local city events in North America annually, and between twelve and fourteen global missions,” says Schuetz, who went to Thailand with OneSight in 2013.

OneSight teams see more than 1,000 people during global missions. They greet patients, perform exams, scan retinas, fetch prescriptions, and fit patients with new spectacles. “The most gratifying feeling comes when you put glasses on a child who can then see clearly for the first time in their life,” Schuetz says. “It’s humbling and provides a renewed perspective of what it means to give back to the community.”

Since Schuetz is not one to balk at a challenge, he agreed to lead an international full-service technology team for the first time in his career. The data center outsourcing project began when he was hired in 2011 and was completed by the middle of 2014—and he certainly didn’t stop there.

Currently, the CTO keeps all of Luxottica’s systems in the Americas and Asia–Pacific running smoothly 24-7. He manages teams that are responsible for system operations, voice and data networks, service management, in-store technology, and IT security for a variety of retail, lab, and distribution locations. “We work hard to deliver a service orientation on everything we do,” Schuetz says. “And align closely with IT leadership at our headquarters in Milan, and always work hard to help our partners in Latin America, Southeast Asia, and Australia—global standardization wherever possible while being mindful of regional needs and differentiators.”

When it comes to his direct reports, Schuetz’s has a simple philosophy: “I hire talented and competent leaders, all extremely deep in their areas of technical and business expertise. I make sure the criteria for success is clear, and we talk frequently to ensure the work is tracking with our goals,” he explains.

Schuetz ensures that more than 35,000 consumers of Luxottica’s IT services are operational daily to do their jobs efficiently for the customer and business. With people on-call 24-7 in the global nature of the business, teams are “always on,” according to Schuetz. Keeping his teams engaged and avoiding burnout is a balancing act—he tries to keep it fun and give frequent praise for individual and team accomplishments. “I drive collective recognition upward, making sure they get credit for work well done,” Schuetz says, encouraging team members to ask for help but ultimately expecting them to deliver. “At the same time, I’m accountable to senior management,” he adds.

Taking his skills one step further, Schuetz has spent the last year driving a culture to ensure the team uses the same language regarding leadership, accountability, and focus on the “blue chips”—initiatives that will drive the organization forward. “Focusing our collective attention on what is critically important to advance the business is top of mind,” Schuetz says. “Time management, meaningful feedback, instilling personal accountability, and asking, ‘What can I do to improve outcomes for the immediate or extended groups?’ are all basic tenets we are learning to use daily to improve individual and group performance.”

The role of the CTO is ultimately one of service. At Luxottica, Schuetz and his technology team take that charge to heart by managing the service levels and reviewing the results and outlook with senior management monthly. “The issues that need attention are not always in the numbers,” Schuetz says. “An in-store issue in Iberia or Mexico may not necessarily trigger a miss in SLA (service-level agreement) but could be causing business process issues locally. Regular global service reviews inform the continuous improvement efforts and help us better support the in-country IT teams with their business partners.” Luxottica’s IT teams are constantly measuring success and focusing on innovation as they strive to simplify their highly complex environment to ever-improve their systems. And of course, with Schuetz at the head, they are always looking for the next great idea.

Dan Cassara restores lives, one home at a time