After an $11 million lawsuit and a failed IPO, Dan Serpico stepped in to stabilize FusionStorm, modifying company culture and building partnerships to drive growth

As Told To Zach Baliva 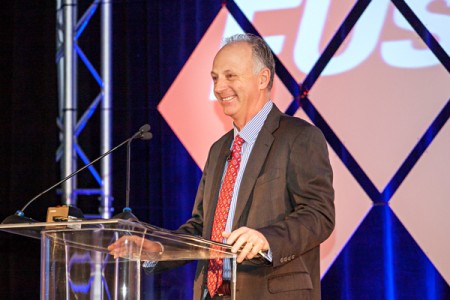 I look back at my career with FusionStorm and see two distinct phases—the first fifteen years and the last five. Today, we’re number fifty-two on the CRN chart for IT solutions and provide services around the world. To get there, we’ve gone through some tough times. The first fifteen years marked an age of extreme entrepreneurism at FusionStorm, during which many described us as the Wild West of start-ups. We were aggressive, flexible, and fluid. We changed almost impulsively. We had great market penetration, great presence, and through the go-go nineties and the dot-com escalation, we saw great economic growth and great credit availability. We had tremendous top-line success. We had a lot of expansion and innovation. We changed our push to market several times, and it was a very exciting place to be. And then all of that changed.

Leading up to the global recession of 2008, there was minimal control. Fast-paced environments are great for smaller companies when ownership and management is hands-on and can control moving parts, but as a company builds it needs to develop more mature systems, because you’re relying on others to carry forward a specific vision from leadership. We were too hands-off in things like hiring practices and cost control. That caught up with us in concert with the financial crisis. It was a recipe for disaster.

In an effort to move fast and keep pace, we hired some salespeople from a competitor and violated noncompete agreements. We got sued, and we lost big. Because of these factors, we didn’t have much credit capability as the financial markets corrected, and we didn’t have the balance sheet to support the corrected view of the world. In short, we had a crisis on our hands.

My background is in finance. I started my career in manufacturing and was running plants before I became CFO of companies. While all this was going on with FusionStorm, I was CFO and became president at the time of the legal judgment against us. I knew I had to stabilize the business, because the company was at a real risk of failing. We had a massive judgment of $11 million and were facing an enormous lack of confidence from bankers, vendors, and employees. It was terrible for us. The most important thing for me as president was figuring out how to save the company and preserve value for shareholders while preserving jobs for our 400 employees.

We developed a strategy to do just that. I picked up the phone and called the CEO for the plaintiff and asked him to work out a deal that would give us both what we wanted. We convinced them that this was in their best interest because it would really be a win-win. He agreed to a deal through which we paid them a settlement in installments over time. Then, we looked at all company assets that weren’t core and sold them for cash. We restructured our borrowing agreement with our bank. It wasn’t an easy time, and I have to give a lot of credit to our employees who hung in there, stayed the course, and came to work every day. We didn’t lose a single top sales or engineering person, and I have an enormous amount of respect and appreciation for them.

Two months later, I became CEO and knew once again that I had to respond to what had happened by trying to instill confidence. Although everything we did was well-intentioned, there was a series of missteps combined with bad timing, and that sent things sideways. We got sued, and then we tried to go public a year later. People were understandably less than pleased. The most important thing was talking a lot and clearly communicating our goals. I stepped in to slow down, rethink what we were trying to do, and take a different approach.We did this all without a bankruptcy, and the company survived. A year later, we decided to try to do an IPO in combination with two other companies. What we didn’t realize was just how bad that timing was. It was a year after the banking crisis, and the stock market was still underperforming. We thought the market had bottomed out, but we were wrong. We also thought Wall Street would still respond to our strategy, but things had changed. We partnered with those two other companies to do a simultaneous roll-up to an IPO, and we worked really hard to put together a merger, but Wall Street simply didn’t buy it. They found it old-fashioned and overcomplicated. They didn’t [understand] our value-add as a company.

“Looking back, I’m constantly reminded of the need to slow down and think. If you’re going to be a good leader in this space, you have to resist the urge to react. Instead, think more long term.”

It turned out to be a nice fit for me to come in then as CEO with my background in finance, because the balance sheet was very weak. I had to create confidence with vendors and sales guys. I had to prove that we would meet payroll. I did that through some very public and very private conversations.

I wanted in part to accomplish this by leading a cultural change. We needed to recognize [that] the things that made us successful in the first fifteen years were not the things that would allow us to be successful going forward. We had to reinvent the company as we started to move into international markets. We had to change our approach. We had to put some processes in place, and we did that. I give great credit to the FusionStorm community for having the faith to accept those changes.

The new vision was all about profitability and control. We needed to create a better earnings environment, and one way to do that is to get control of your costs. We’ve done that. We sold and eliminated some costly expenses and restructured our debt. Stability came from the decisions to manage cash flow and get control, but stability needs to be looked at from a long-term perspective. We looked at our portfolio and customer mix and saw that we were highly leveraged around two great and well-known customers. Those customers were literally 45 percent of our revenue, and that is a dangerous place to be.

Our sales leaders developed a plan to deleverage our concentration around those two companies. We added new sales people, added Seattle, got aggressive in Southern California, and added leadership out east to drive volume in other markets. Today, those two anchor clients are only 15 percent of our revenue, and that’s a much more stable environment. Our margins are higher as well.

We’ve changed, but we still react quickly and we’re still flexible. Ten years ago, 97 percent of our sales were Oracle and Sun products. Today, those brands represent almost nothing as the market moves away from resellers like us for those two brands.

The FusionStorm engineering team has responded very quickly to changes like that, and that’s what makes us successful. Our legal team is bigger as we go around the world, and we have no litigation today because we have greater oversight. Our sales teams understand the processes that are in place, and we have the staff to support them. We have great partners, and we’ve been very good at identifying the emerging technologies that we need to adopt.

Looking back, I’m constantly reminded of the need to slow down and think. If you’re going to be a good leader in this space, you have to resist the urge to react. Instead, think more long term.

We’ve changed a lot, but it’s not about change anymore. The next few years are about growth and about building off of this new platform we’ve worked so hard to create. The company is in a good place, and now, it’s time to keep moving forward.