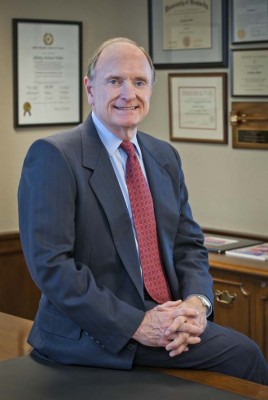 In a little town carved out of the mountains of southeast Kentucky, the “Wildman’s” voice once crackled over the 1410 AM frequency. Though he had “spun the discs” and read the news for three years in Harlan, Kentucky, his last stint on the air was a return from hiatus. After a semester at the University of Kentucky, and eight months of hard labor in an Indiana foundry, J. Michael “Wildman” Wilder returned to his hometown and picked up where he left off—at the job he landed as a freshman in high school.

As a boy, Wilder never envisioned himself pacing in front of a jury or even leaving Kentucky. Now, as the vice president, general counsel, and secretary for Marathon Petroleum Corporation, the executive’s title may be a far cry from the radio personality he once was, but Wilder’s character is still rooted in Harlan County and a family that raised him to value more than recognition.

Wilder grew up on a communal farm tended by his extended family, using mules to pull the plow. The family shared a joke that they raised every kind of animal and ate them all. The men were coal miners. After his father died of injuries from a mining accident, four-year-old Wilder grew very close to his uncles and, especially, his maternal grandfather, Oscar Ellis. “He was an individual that defined the term ‘personal integrity,’” Wilder says. “He was the perfect role model for a little kid, and I idolized him.” Though Ellis only had a sixth-grade education, he could fix anything that was broken and was always looking for ways to improve anything that wasn’t. Perhaps Wilder picked up that penchant for tinkering, or maybe it was in his genes.

In high school, Wilder discovered a fascination with automobiles and their design. He found a confidant in his political science teacher, Bill Fortney, a “renaissance man” who shared Wilder’s interest in transportation—though Fortney preferred the two-wheeled variety. In history class, teacher Josh Hensley challenged Wilder to think “beyond the words in the book.” Together, Wilder says, those men helped open his eyes to the bigger world.

During his first attempt at college, Wilder registered for classes as a mechanical engineering major—the closest degree to automotive design the University of Kentucky offered. But, he wasn’t thriving. He didn’t feel college was right for him and decided to drop out. To Wilder’s family, a man’s career was nothing to put a price on. If he had chosen to remain in Harlan, on the same path as his “half a dozen fathers,” that decision would have been honored. That’s not to say they couldn’t recognize potential.

For a year after his return, Wilder’s Aunt Ruth hounded him about going back to school. Wilder became active in the local chapter of the Jaycees, and the air of professionalism about the other young men who were members of that organization rubbed off. The seed of an idea that he’d been rolling around in his brain took root. In 1971, Wilder decided to try college again, this time with dreams of earning his Juris Doctorate.

As Wilder made post-graduate plans, his sights weren’t set on representing a Fortune 50 company. “I had every intention of going back to Harlan and hanging out a shingle on my own practice,” he says. It was only out of curiosity and the enticing incentive of travel that he sat for an interview with the vice president of law from Ashland Oil Inc., but, on August 1, 1978, he faced his first task in the Ashland law department: becoming the resident expert on the Petroleum Marketing Practices Act, presented by his new boss as a three-foot-tall stack of legislative history files.

“I thought I’d stay with Ashland for a few years and then go back to Harlan, but here I am, 34 years later,” Wilder recalls. “After being with Ashland for a year, I don’t think the thought of returning to Harlan ever entered my mind again.” Wilder married his wife, Nancy, while working for Ashland in Russell, Kentucky. Their first child, a son named Ellis after Wilder’s beloved grandfather, was born there.

In 1986, Wilder’s career took him to Lexington, Kentucky, first as senior attorney for Ashland’s Valvoline division and later as general counsel of its SuperAmerica convenience-store division. The Wilders’ second child, Lizzy, was born while they were in Lexington.

Off the Cuff with
J. Michael Wilder

What’s your definition of success?
You have experienced success if you feel a deep sense of personal satisfaction from what you have accomplished or helped others accomplish.

What’s your motto?
Surround yourself with good people, and don’t get in their way.

What do you believe is possible that others don’t?
I believe the amount of work that people who are engaged can manage for short periods is often underestimated. It’s amazing what people can accomplish if they believe in what they are doing and believe there is a light at the end of the tunnel.

What’s your favorite lawyer movie or character?
Charles Laughton in Witness for the Prosecution. He’s just a salty, old character with a keen mind and a dry sense of humor.

What’s your favorite legal term?
Amicus curiae. It translates to “friend of the court.” I find that ironic, because in practice it’s usually a friend of the plaintiff or defendant.

While with SuperAmerica, Wilder’s influence gradually expanded well beyond the general counsel’s chair, as he took on leadership of SuperAmerica’s real-estate, store-design and -construction, environmental and safety, and eventually marketing functions.  He even spent a year based in Milwaukee, where he served as regional vice president for more than 100 SuperAmerica convenience stores. In total, he spent more than 10 years with broad responsibilities on the retail side of the business before returning his focus to the practice of law, as general counsel to the newly formed joint venture, Marathon Ashland Petroleum LLC, known as MAP, in Findlay, Ohio. With this new responsibility came the great charge of coalescing the efforts of two legal teams with attorneys initially spread across four locations in the Midwest. “We tried to build the new MAP law organization on the collegial Marathon Law culture,” Wilder says. “We have continued to build on that culture, and now I believe we have one of the very best in-house law groups of its size in the country.”

Wilder’s career has taught him many lessons. “One thing I have learned along the way,” he says, “is that, if you have good people and empower them to solve a problem, they may not arrive at the same answer you would have, but they will come up with a good solution, and you have to be prepared to accept it. When you empower people, you have to trust them.”

Now, more than 34 years after that first stack of files landed on his desk, Wilder is still engaged by his work and energized by the many smart and dedicated colleagues working in the law organization and across the entire company. While off the clock, he enjoys golf and travel, and has a passion for big-game hunting. “I have too many hobbies and too little free time to be good at any of them,” Wilder says.

Each day, Wilder takes his place in what his younger colleagues jokingly refer to as “the geriatric wing” of the MPC law organization. His career has netted him a list of professional accomplishments, though that’s not the most important thing to the man from Harlan. His greatest achievement, Wilder says, is being a part of a loving family, with whom he relishes spending time. “Our son was married in August [of 2012], and our daughter is engaged to be married in June [of 2013],” he says with a smile. “Our family is getting bigger.”

Making a Name in Maine