If you’ve been on Facebook recently, you know there’s a new type of farmer in town. In FarmVille, one of the most popular games on the social-networking site, players turn empty plots of digital land into prosperous, profitable farms. Using virtual currency to buy seeds and supplies, users plow land, harvest crops, and raise livestock—they can even turn Facebook friends into “neighbors” for the purpose of sending gifts, sharing provisions, completing tasks, and joining virtual “co-ops” of community farmers. It’s agrarian entertainment at its finest, and it’s all done without having to leave the computer. Or, for that matter, each user’s Facebook page.

For San Francisco-based Zynga, the swelling company behind the game—not to mention more than 60 others, including CityVille, Mafia Wars, Zynga Poker, and Words With Friends—it’s also an experiment in Internet law. After all, every game has rules; the rules for social gaming, however, haven’t yet been written.

“We’re in a totally disruptive phase of the Internet,” says Zynga general counsel and secretary Reggie Davis. “Disruptive both in terms of social networks and how they operate—allowing app providers to sit on the border of their platforms—and in terms of technology. In the next two to three years, whatever device you use [to access the Internet] will double, triple, or even quadruple in computing power. It’s exciting times.” 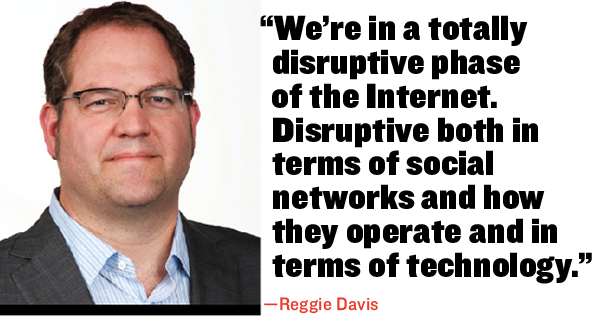 For companies on the cutting edge, “exciting times” can be just as scary as they are thrilling, as new technology often brings to light new legal questions. Like FarmVille farmers picking corn, Zynga is harvesting answers. “There were some legal principles that didn’t exist three years ago that now exist, because we were willing to bring lawsuits,” Davis says.

One such lawsuit involved employees who’d left the company and taken some of Zynga’s technology with them. “A federal judge gave us the first order that said a social-game mechanic—the way you interact with your friends socially on a platform in a game environment—is a protectable trade secret. Injunctions and restraining orders were
issued as a result of that.”

The victory, however, was hard-won. “It wasn’t easy convincing a judge that playing games is actually very deep and important, and that we’d done a lot of hard engineering and thinking to make something that looks so simple but is in fact very complicated,” adds Davis, who filed 25 lawsuits on behalf of Zynga in his first six months alone as its general counsel.

Such legal battles are demanding, but Davis is used to combat. A former offensive tackle for Harvard University’s football team, he spent 10 years at Yahoo!—all but three of them as a litigator—before joining Zynga in 2009. During that time, he was on the front lines of early Internet law, establishing legal precedents in areas as varied as free speech, privacy, and copyright. “There are few issues that we didn’t litigate at Yahoo!” Davis says. “Every significant issue that shaped the Internet happened there.”

The first phase of the Internet, perhaps. But a lot of what’s shaping the next phase is happening at Zynga. When Davis joined the company, it had 114 employees, one office, and $29 million in the bank. Today, it has more than 3,000 employees, 30 offices worldwide, and nearly $2 billion in the bank. “In the last three years, we’ve experienced incredible growth,” says Davis, who oversees a legal team of 38. “Zynga is ready to pursue the next big thing.”

The next big thing, Davis predicts, is mobile gaming. From a legal perspective, however, what’s next is never truly new. “Over time, you craft Internet law that has some basis and tether to existing law,” Davis says. “You argue things by analogy: the Internet is new and different, but it should be looked at like this other thing—the phone system, for example.”

Speaking of phones, Davis’s rarely stops ringing, as he’s involved in virtually every legal and business decision Zynga makes. At a company that’s growing as quickly as Zynga is—the company has acquired more than 30 independent businesses since its founding in 2007—there are lots of decisions to make. One of the biggest, for instance, was the company’s decision to go public in 2011, when its initial public offering became the third-largest tech IPO in history, behind Facebook and Google.

That’s not to say that Zynga wants to become a traditional public company. In fact, to ensure it doesn’t, the company spends just as much time developing its culture as it does its games. That culture, which Davis says is focused on “play, irreverence, and fun”—Zynga’s headquarters includes a video arcade, gym, basketball court, and wellness center—permeates every corner of the company. Even its legal team put play to good use: the team turned Zynga’s privacy policy into a game called PrivacyVille that allows users who learn about Zynga’s privacy policy, then answer questions about it, to earn virtual money that they can spend in Zynga games.

“We’ve seen a 75-fold increase in the number of people and time spent coming to our privacy policy as a result of creating a game out of it,” says Davis, who has launched similar games for Zynga employees: ContractVille helps the company standardize its contracts, while PatentVille helps staff turn their ideas into patented inventions. “As a 4-year-old company, we have 54 patents and about 450 applications on file with the US Patent Office.”