David Malfitano runs an HR department that makes any other look like a “weenie.”

David Malfitano’s personality may intimidate some. He is no-nonsense, outspoken, driven, and incredibly assertive, all characteristics one associates with a CEO. Here’s the thing: he’s vice president of human resources. If more of the “HR weenies” that inhabit the industry had similar go-getter attitudes, Malfitano contends, human resources wouldn’t have such a bad name.

Thankfully, the profession has Malfitano on its side. It’s his goal to completely do away with traditional HR approaches, opting instead to transform the department into something most companies have never seen before. As a matter of fact, shortly after being hired by Wayne Farms LLC in 2003, Malfitano wrote his HR vision for the poultry company, and it speaks volumes about the fresh, new approach the trailblazer has brought to HR.

“Human resource professionals, who by their individual and collective competence, have differentiated themselves as leaders, business partners and change pioneers,” the vision reads. “Data and research-based champions of competitiveness who are consistently able to deliver outcomes, which add measurable value and contribute to financial performance. Teachers and learners who increase our intellectual capital and create structures and practices that maximize the performance of both individuals and the organization.”

Prior to Malfitano joining Wayne Farms, the company’s HR department looked like every other in the country, with the usual emphasis on hiring, training, and what could only be described as administrative tasks. In other words, it wasn’t strategic, and Malfitano’s goal was to make it “damn strategic” by creating a framework that, according to Wayne Farms’ CEO Elton Maddox, changed the way HR was perceived in the company. “Most of the early efforts were focused on changing the culture for HR to become a business partner,” Maddox says. “David began the process by implementing a structured performance-management approach. The focal point was to direct communication between the supervisor and the employee at all levels with honest, straight-forward conversation.” 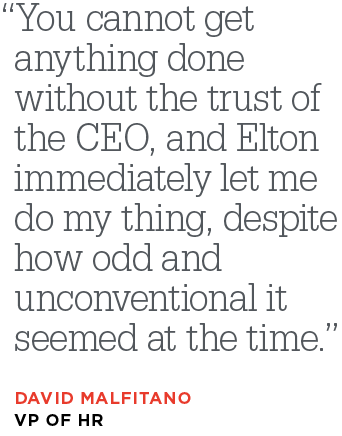 Malfitano started from scratch, letting go of about 70 percent of the previous HR staff and focusing on four critical functions that required significant change: performance management, training and development, succession-planning processes, and hiring processes. The vice president of human resources placed extra emphasis on performance management, an HR function that, when implemented properly, provides performance-management tools and processes that align individual efforts with business objectives. According to Maddox, the company had embraced a culture of performance improvement before Malfitano’s arrival, but lacked the change-management skills to execute it properly. Prior to 2003, performance management at Wayne Farms was uneven at best: individual goal setting and coaching were non-existent, and performance reviews were not delivered annually, says Steve Cox, director of IT and a 15-year veteran of Wayne Farms. Earlier in his career at the company, Cox recalls not receiving a performance review for three years.

What has emerged as a result of Malfitano’s efforts is an HR department that not only runs like a well-oiled machine, but one that is fully integrated into the business side of the company—a place where the company’s HR professionals know just as much about the company’s financials as they do about training employees to be leaders. Malfitano was so successful at overhauling Wayne Farms’ performance management, in fact, that his accomplishments were featured in a case study. Malfitano is quick to point out, however, that none of this could have been possible without his team, and especially not without the trust of Maddox. Malfitano says Maddox is the main reason he packed up his life in Detroit after a string of successful positions at Fortune 500 companies and hightailed it to Georgia to work in the poultry industry, something completely foreign to him. “The first and initially only reason I took this job was because of our CEO,” Malfitano says. “You cannot get anything done without the trust of the CEO, and Elton immediately let me do my thing, despite how odd and unconventional it seemed at the time. He was truly dedicated to transforming the HR function, and none of it would have been possible if it weren’t for his willingness and enthusiasm.”