Never afraid to “roll up his sleeves,” former-engineer David Bialosky steers the company through complex terrains

David Bialosky, senior vice president, general counsel, and secretary of The Goodyear Tire & Rubber Company, is more interested in the nuts and bolts of business than most corporate attorneys—and for good reason. An engineer in lawyer’s clothing, Bialosky began his professional life, after graduating from Dartmouth College in 1980, as a mechanical engineer for The Standard Oil Company designing piping and tanks for refineries and chemical plants. However, he didn’t love it enough for a long-term commitment—or the colder climates he encountered while working on the Alaskan pipeline—and he eventually returned to school at Northwestern University to pursue a law degree.

While he’s been practicing law since 1985 when he joined Thompson Hine in Cleveland, his engineering background still plays a role in his current day-to-day oversight of the legal function, compliance and ethics, and government relations at Goodyear. “I’ve got an engineer’s problem-solving mindset, so I tend to be extremely fact and data driven,” says Bialosky. He also retains an engineer’s interest in products. While working in commercial law at Thompson Hine, Bialosky wanted more details than the brief snippets of clients’ underlying businesses available to expensive outside counsel. “In depth knowledge of the underlying business improves the quality of legal counsel,” he added. Bialosky’s interest in products drove him to his next career move in 1989, when he became in-house counsel at TRW Inc.

Initially based in Cleveland, TRW had a credit-reporting business in Orange, California, and Bialosky was only too happy to relocate to sunny Southern California. However, by 2002, Bialosky—then vice president and assistant general counsel of TRW’s automotive business—was in Detroit, where he became engulfed in the vast amount of legal work created by the breaking up of TRW after the sudden departure of its CEO at the time, Dave Cote. “That period of time, from 2002 to 2004, going through Northrop Grumman’s takeover of TRW, Blackstone’s LBO [leveraged buyout] of TRW’s automotive business, and the IPO [initial public offering] of TRW Automotive, was incredibly exciting,” Bialosky recalls. “I learned a lot.”

After being appointed general counsel of TRW Automotive in 2003, Bialosky was charged with establishing the corporate law department and governance processes for the newly created entity. He stayed with TRW Automotive until 2009, when he moved to the role he now holds at Goodyear. Today, Bialosky particularly enjoys the business side of his role. “When business people ask for legal advice, I roll up my sleeves and work with them to determine the best way to proceed,” he says. “I think most good GCs are like that.”

Giving Credit Where it’s Due

Bialosky considers himself a very supportive leader of what he describes as the best legal team in the business. He doesn’t micromanage—unless there’s a reason to. “When things go right, I make sure my team gets credit for their accomplishments,” he adds. “I’ve seen people over the years take credit for what’s done by their team, and I think it’s so demotivating for the team, and I also think it is so transparent, that people know when it’s being done—I shudder every time I see it.”

Besides the management of his own team, Bialosky is also on point when it comes to managing the barrage of information directed at his board, handling the legal minutiae so the directors can focus on their own priorities, such as oversight of strategy, risk, and succession planning.

To decompress after a day of sorting through the tangle of business regulation, Bialosky runs, cycles, and hikes in the Cuyahoga Valley National Park with his two dogs, a Labrador retriever and an Australian shepherd. He also enjoys active vacations with his wife and four children, ages ranging from 15 to 21, citing their recent hike to Machu Picchu in Peru, or a biking trip he and his wife went on through France’s  Dordogne river valley.

However, only two activities help him shut out work completely: skiing (“which I think has something to do with the survival instinct; if you are thinking about a proxy statement while negotiating a double-black run you risk hitting a tree”) and playing the piano, which he took up last year when his wife, Carolyn, bought him piano lessons for his 53rd birthday. “I only want to play classical pieces. I’m not willing to be work on scales,” he says, “So, I just muddle my way through pieces, while my teacher reminds me how much easier it would be if I just worked on those scales.”

For Bialosky’s professional future, he plans to stay in Akron, Ohio. He enjoys his current position with Goodyear, working to increase the value of Goodyear’s iconic brand. But maybe one day, in retirement, he foresees a return to the sun and warmth of Southern California. 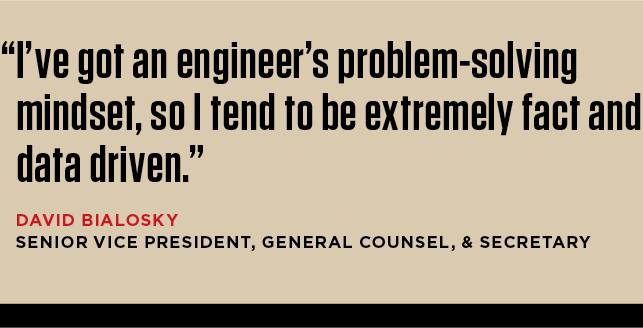