From tour guide to VP of event services and merchandising, Bryant has made quite a career with the historic St. Louis ball club

As told to Kelly Hayes

After accompanying her mother to the baseball stadium as a child and falling in love with the sport, Vicki Bryant got her first job with the St. Louis Cardinals in 1981 at the age of 16. First serving as a part-time tour guide and gift-shop clerk, Bryant was later promoted to numerous positions throughout the Major League Baseball (MLB) organization, eventually settling into her current role as vice president, event services, and merchandising. Here, Bryant shares her journey, including what drew her to baseball in the beginning, how she worked her way up the organizational ladder, and why she thinks St. Louis Cardinals fans are the best in the league.

My mother was the head nurse for the Cardinals for 30 years. When I was a little girl my parents divorced. Mom couldn’t afford a babysitter, so she took me to ballpark with her. I would sit out in the seats and watch the games. I was probably the only eight-year-old that knew how to keep official score. The ushers kept an eye on me to make sure I didn’t get into any trouble. After every game, I would stand at the elevator where many of the players would come out. Night after night, I would ask greats like Lou Brock and Bob Gibson for their autograph. It was there that I developed a love for the game of baseball. 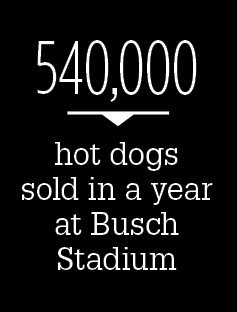 When I was 16, I applied for a part-time tour guide and sales clerk position at the St. Louis sports Hall of Fame museum and gift shop. By the end of the baseball season, I was the assistant manager. In 1982, when I was 18, I was asked to manage the gift shop during the World Series. The following year, I began to work for Civic Center Corp., a sister organization of the Cardinals, which owned and operated Busch Stadium. I worked in a variety of departments all through college. When I graduated St. Louis University in 1986, the president of Civic Center, Mark Sauer, asked me to promise him that I would not accept another position without giving him the opportunity to make me an offer. Within a couple of weeks, he offered me a full-time position as “analyst,” managing the outside vending retail operation, and soon after, the gift shop and museum. Mark Sauer also told me to take one semester off and then to start working on my MBA. Mark was a wonderful mentor and leader.

I have held a number of positions throughout my career with the Cardinals, including analyst; manager, special projects; and director, special projects. Over the years, I have demonstrated the ability to take on additional responsibilities and deliver results, often exceeding expectations. My philosophy is to “under-promise and over-deliver.”

Currently, I am the vice president, event services, and merchandising. I am responsible for the management of the Sportservice contract, overseeing all food, beverage, and retail operations in Busch Stadium. I approve all food and beverage products and pricing in addition to daily interaction with Sportservice management on financial performance and service issues. Additionally, I manage the Hall of Fame museum and stadium tour operations and the Cardinals Authentics retail operation. I also oversee the Busch Stadium Special Events department.

Our fans are what set us apart from the rest of MLB. They are extremely knowledgeable about the game of baseball. They cheer when an opposing player makes a great play and even give a warm welcoming round of applause when a former Cardinal returns to Busch Stadium playing for another team. There is no better place to be [than Busch Stadium] on opening day—considered a St. Louis holiday—or during a series with a rival team like the Cubs. The atmosphere is absolutely electric.

As an organization, our goal is to provide a safe, fan-friendly environment to enjoy a quality entertainment experiences and to continue to field a competitive team, winning as many championships as possible. Only the Yankees have won more World Championships than the St. Louis Cardinals. I love being part of the Cardinals organization. I love knowing that my staff and I make a significant contribution to the club by generating revenue to support the team on the field. Most of all, I love that I help create memories and experiences that our fans will cherish for the rest of their lives.

Starting a New Career as an Investment Manager