Skycam’s eponymous camera technology puts viewers on the field with their favorite athletes.

You might not be familiar with the name Skycam, but chances are you’ve seen the work of its creator, Garrett Brown, a serial inventor who is at least partly responsible for one of the most memorable scenes in movie history. Brown invented the steadicam, a rig that enables users to follow people on foot without the camera bouncing. This is the same system that was used to film the now classic scene in Rocky, where actor Sylvester Stallone runs up the steps leading to the Philadelphia Museum of Art, a smooth, stunning shot made possible by Brown’s invention.

That remarkable invention led to another: a suspended steadicam that has its movements controlled in three-dimensional space. Welcome: Skycam, a suspended
steadicam robot that has literally changed the way we view sports. “Most people have heard of Skycam—and if they haven’t, they for sure have seen our shot on TV or our product flying along wires at sporting events,” says Stephen Wharton, Skycam’s vice president of engineering and operations.

Wharton has had his own illustrious history in the tech world. He is the creator of Xpower, which measures in real time how much g-force a bull exerts while bucking and how much force the rider experiences throughout the ride. Created in 2005, Xpower was truly pioneering, linking sports, television, and science in a way that had never been done before. When Wharton sold Xpower, he was asked to be a consultant for Skycam, and he’s been with the company in some capacity ever since.

To call Skycam revolutionary would be an understatement. In football, an aerial camera can now sit right behind the quarterback, providing unprecedented views of the game. It’s an effect that makes home viewers feel as though they are on the field with the athletes. And while 80 percent of Skycam’s business is with American football leagues, the wildly successful company also has contracts with the NBA, MLB, the Olympics, the World Cup.

As the popularity of Skycam grows and fans come to expect more of the shots that were previously found only in video games, the biggest challenge facing the company is the speed of technology itself. This is compounded by the fact that Wharton and his team have almost no downtime, because they are responsible for showcasing the world’s biggest events. The constant grind is worth it, however—more than just fans are raving about Skycam.

“Analysts love our camera angle because it allows them to see a play develop from the quarterback’s perspective,” Wharton says. “They can pinpoint why a play developed the way it did, or why a decision was made from their perspective … Directors and producers love our angle because we can provide amazingly beautiful shots and do things otherwise not possible with a camera.”

In short, the technology has brought a new perspective to some of the world’s oldest and most treasured sports. The result is more than a more engaging experience: young athletes and fans alike are becoming more educated viewers. And with such a rabid, eager audience, Skycam is going to be playing ball for the foreseeable future. 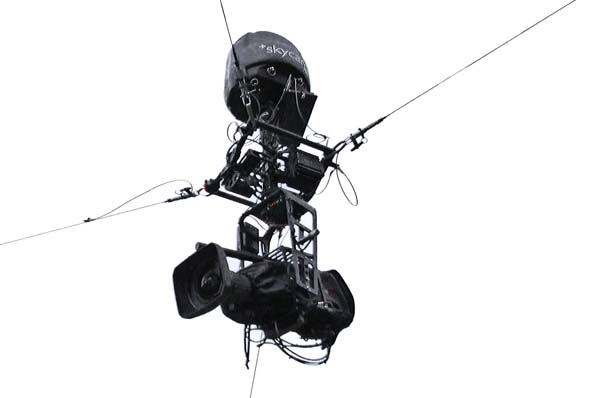