Though many competitors were forced to tighten their belts, Safety Service Systems found success by shifting its business model to essentially create its own event opportunities

As told to Julie Schaeffer

When Paul (pictured at right) and Mary Beth Gerlach founded Chicago-based Safety Service Systems (S3) in 1996, they thought they had a solid business model: S3 would operate events and provide event- and service-related labor, including security guards and ushers. The business initially flourished; along with sister company Safety Service Systems Security, a full-time guard service. In 2008, however, everything changed when the US economy faltered. The Gerlachs, forced to consider other options, came up with a unique solution: a third company, S3Concepts, which creates events, then populates them with S3 labor. Paul Gerlach shares with Profile how he developed this idea.

S3 was a natural fit for my experience. After college, I worked as a rock-and-roll bouncer, touring with many bands, including Aerosmith and Cheap Trick. I then managed event operations and security for the Chicago Cubs for 10 years. When I left the Cubs, I worked as a consultant in the same field.

We had historically sold S3 services as a unit. I would come in and develop the systems used to manage service operations for special event clients, such as Lollapalooza or the Chicago Bears. Typically, we’d also provide support for other event operations, providing the site crew, housekeeping, or show-support labor.

In 2008, we realized we had to move in another direction. As the economy worsened, one of the hardest-hit industries was the service industry. People had less money to spend attending special events and sporting events, but our own payroll was still increasing. The result was shrinking growth and shrinking margins. We saw a lot of companies in the service industry collapse.

We built on what we knew was an asset. What we had to offer was our experience creating the operating systems that support events. Previously, we had just used that system to sell man power. Now, we decided we’d sell the system as our product. We’d feature our event-management skills and let the labor take care of itself. It is a product other people didn’t have. We called it S3Concepts.

The idea was to create our own events. One of our S3Concepts clients was the Chicago Tribune. The company has large property in Chicago, called the Freedom Center, a unique swatch of land on the Chicago River, which it was interested in using for special events. I worked with them to develop ideas for events to put into the space. We did a rib fest and rock concert as well as a haunted house. 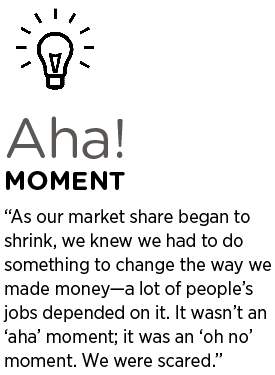 In 2011, we brought in a theatrical production. I’d seen the 360 production of Peter Pan in London, and helped bring it to the United States, consulting on shows in San Francisco, Orange County, California, and Atlanta. I thought it would be perfect for that piece of land. The Chicago show ran for 16 weeks.

We’ve been working on another theatrical project ever since. S3Concepts is a partner in a venture to open the Riverfront Theatre Company, a new 51-meter theatrical tent, in the same space. In 2012, instead of running one show for 16 weeks, we’ll have a whole series of shows that will run from May through the end of December. We’re bringing in a variety of productions, from dance shows to concerts, theatrical and children’s shows. Our strategy is to develop the Riverfront Theatre into a permanent seasonal venue over a three-year period.

By creating the environment, we’re creating the work. We started S3Concepts with the idea of creating our own event opportunities. By creating our own venue, however, we can populate those events with our own employees. We design the project so that S3 will handle site, front-of-house, production, security, parking, and ushering. In doing this, we make money as both a partner and a manager.

S3 overcame one major obstacle, but every day we’re in business we’re overcoming more obstacles. In the service industry, attention to detail is paramount. The care with which you plan things and manage employees can make or break your business. The credit for making sure we get through each obstacle goes to my wife.