Since her start with the Pittsburgh Pirates, Patty Paytas has helped the ball club give back to the city that it calls home

Growing up with a brother with a disability, Patty Paytas knows all too well the challenges faced by families of children with special needs. Now as executive director of Pirates Charities, she brings her empathy to work with her, helping the charity support philanthropic endeavors such as the notable Miracle League program, which allows children with special needs to play the game of baseball. “My brother is 50 years old and he would have loved to be able to participate in a baseball league when he was growing up, but he couldn’t,” says Paytas, who is also vice president of community and public affairs for the Pittsburgh Pirates. Here, Paytas shares with Profile how she aims to hit it out the park for both the community and the Pittsburgh Pirates.

I got my start with the Pittsburgh Pirates as an intern in college in 1981. I had a sports journalism class at Slippery Rock University and my professor was also one of my advisers. He had a great relationship with the ball club and supplied the media department with interns. I thought it would be a fun way to spend the summer. I knew (after college) I was either going to do something in the journalism area or teach or do something in the communications field. I wasn’t thinking about sports, but I took that as a summer class and really liked it.

Two years later, I was hired full-time, and in 1986 I became the club’s first community-relations director, a position I held until 1994. I think it was an industry trend at that point. Prior to that time, most ball clubs did not have somebody in a community-relations position. But, most major league teams began to create them because they started to realize it was important how they interacted with the community at large. In 1994, I left the ball club for six years and worked for a public-relations firm before coming back in 2001 as assistant vice president for new ballpark development. In 2002, I was promoted to vice president of communications until 2007 when that department was split and I became vice president of community and public affairs and executive director of Pirates Charities. 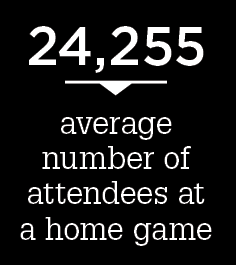 Pirates Charities began in 2007. The idea was we wanted to focus on our philanthropic efforts so we could make a greater impact in the community. It’s very meaningful for [the Pittsburgh Pirates] because we consider ourselves a part of the community and we take very seriously the responsibility to give back. And it just makes so much sense. We’re a baseball team. This is what we do. While we don’t have the expertise to build a Miracle League field, we do know how to generate awareness and financial support, and how to get other partners involved.

Jacquie Haggarty Puts Customers in Control of Their DNA

I know from personal experience that having a child with special needs is very challenging—it really is. But, to find outlets like this or places where everybody is welcome also creates camaraderie with other families going through the same thing. There’s a bonding that happens. Often times, kids with disabilities have been told “no” a lot in their lives. They’re not able to play with their siblings who are participating in Little League or T-ball. These fields provide baseball opportunities for kids with special needs. Once they’re built and leagues are formed, kids with special needs play just like the other kids. They’re just really remarkable projects.

In the summer of 2009, the Pirates Charities Miracle League Field opened in Dick’s Sportsplex. They now have more than 300 kids participating in this league every year. I really do believe the Miracle League Fields are wonderful community amenities. It’s something that makes us feel good about what we do. When we have an opening day at a new field, there’s not a dry eye in the house. It’s really a wonderful thing to see the kids get so excited that they’re going to get to play baseball just like their brothers and sisters.

Juggling All the Components and Managing to Grow a Start-up