As told to Julie Schaeffer

There’s nothing old-school about traveling by bus—at least for Megabus. By eliminating the need for sketchy bus terminals and providing European-style double-deckers complete with Wi-Fi, the company is finding its business model is a mega hit across the pond. Just six years after launching in North America, Megabus operates 7 hubs, serves 74 cities, and has transported more than 15 million customers—all using a method that was previously deemed part of a bygone era. Dale Moser, president and CEO, shares his company’s road to success.

At the time we launched, people had stopped riding buses. Research out of DePaul University’s Chaddick Institute [for Metropolitan Development] showed there had been a significant decline in bus ridership, particularly, inner-city ridership. From research we had done with potential customers, we knew the cause. People didn’t like to go to bus stations, which were perceived as being unsafe and too far from tourist attractions. The conditions of the buses weren’t appealing. The trips took too long. And considering all that, it was too expensive.

The Megabus concept launched overseas first. We started in Scotland in 2004. We grew rapidly, expanding in 2005 into England. Less than a year later we decided we’d bring the business model to North America, and we launched in the United States in April 2006.

It was an easy launch because we already had infrastructure in place. Megabus is a subsidiary of Coach USA, one of largest transportation companies in North America, which in turn is a subsidiary of Stagecoach Group, a large UK company. So we weren’t operating a start-up business; we had the facilities, technology, and staff in place. All we had to do was secure some new buses and hire people to operate them. It was an incremental business expense.

That said, we had to overcome a perceived stigma. Buses were considered old-school, so to market ourselves we had to be inventive. We needed to reinvent the travel experience and we did so by marketing via the Internet. It reaches more people than old-fashioned marketing approaches, such as newspapers and billboards. It also reaches our three target markets easily: young professionals ages 18 to 35; women ages 35 to 55, who want to travel, but prefer not drive; and “silver surfers,” who are retirees with flexibility, but budget constraints. Today, we sell 99 percent of our tickets online.

We also did things other bus lines weren’t doing. We tried to implement a European model for transport. We have intermodal access, with central locations for pickup and drop-off. In Chicago, for example, we’re at Union Station, where you can pick up the Metra, Amtrak, subways and elevated trains, and cabs. We offer express service, meaning we go from city to city without stopping. We have European-style double-decker business with Wi-Fi access, so people can utilize their time efficiently while riding on our bus. 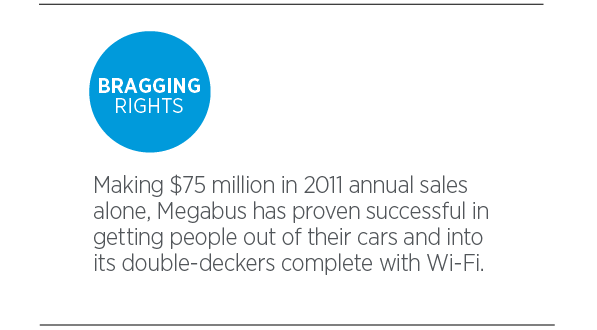 We’re also very environmentally friendly. We carry 80 people on a bus. That decongests the highways and city streets. It also reduces the demand on fossil fuels, because a motor coach achieves a kind of fuel economy per passenger mile you can’t obtain in a car that gets 25 or 30 miles to the gallon. We also don’t pollute: Environmental standards today for emissions mean our buses give off 10 times less CO2 than a standard car.

Success was immediate. We got people out of their cars, and these were people who could afford to drive—we created new motor-coach customers. They had $35,000 cars, but wanted to take the bus instead. Businesspeople ride our bus. People tell us our appeal comes down to two things: When riding Megabus, they get to be productive and they save money. People felt like they were wasting time traveling by car and air, and they were paying a lot to do it. As Americans are attempting to stretch their weekly incomes, Megabus has quickly become the smart alternative to the other transportation options available.

Ultimately, I think we were successful because we knew our end user. My philosophy is that you have to be good at knowing, meeting, and exceeding customer requirements. We did the research up front. We knew what our customers wanted. And we delivered it to them.

Modern Hotel Marketing and Management for a Four-Diamond Hotel