In summer 2009, the mercury was high—and so were tensions in Washington, DC, where lawmakers were in the thick of a contentious health-care reform debate. That’s when Cameron Findlay joined the world’s largest medical-device company, Minneapolis-based Medtronic, Inc., as senior vice president, general counsel, and corporate secretary. It was like entering the lion’s cage at dinnertime. Luckily, Findlay—a self-described “political junkie” who’d clerked for a US Supreme Court justice and served in the administrations of two US presidents—was up for the challenge. He tells Profile how he got to where he is today, and what it’s like to practice law in the rapidly changing health-care industry.

I was interested in the law from a pretty young age. I had to do an exercise in elementary school where you wrote an autobiography [from the point of view of your future self]. I actually said in that autobiography, in the sixth grade, that I was going to go to Harvard Law School and be a lawyer.

I grew up in Elkhart, Indiana. I went through public high school there, then went to Northwestern University as an undergraduate, took two years, and studied on a scholarship at Oxford, then came back and went to law school at Harvard Law School. After that I moved to Washington, DC, and had two clerkships. The first was on the US Court of Appeals for the DC Circuit, which is the second most important appellate court in the country. Then I clerked at the US Supreme Court for Justice [Antonin] Scalia. From there, I went straight to work in the administration of the first President Bush—George H.W. Bush—both at the White House as deputy assistant to the president and counselor to the chief of staff, and at the Department of Transportation as counselor to the secretary of transportation. When [Bush] lost the election in November 1992, I had to get a real job, so I joined Sidley & Austin in Chicago as a litigator. In 2001, I was asked to be the deputy secretary of labor for President George W. Bush. I did that for two-and-a-half years and then became general counsel of Aon, which is the world’s largest insurance brokerage and HR consulting firm. I did that for six years before taking my current position. Now, I work for the world’s largest medical-device company.

I’m a political junkie. In a sense, then, working in the White House for me was like being paid to play baseball. It’s something I would have done for free and loved. I was there during the election year of 1992, where we had Pat Buchanan taking on President Bush in the primaries, the rise of Ross Perot as an independent candidate, and then, of course, the general election against Bill Clinton. It was a really wild time to be in the White House. 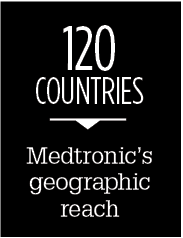 I joined Medtronic in August 2009. The story of its founding is kind of like an Apple or an HP, because it was founded in a garage by a guy named Earl Bakken. On Halloween night in Minnesota in 1957, there was a massive snowstorm that knocked the power out at the University of Minnesota Hospital. A child died who’d been hooked up to a pacemaker that was plugged into the wall, so the head of the hospital’s cardiology department asked Earl whether it would be possible to come up with a battery-powered pacemaker. He went back to his garage and emerged a few days later with the world’s first battery-powered pacemaker. At the time, it was roughly the size of a dishwasher and had to be wheeled around. Now, we’ve got a pacemaker that’s probably one inch by two inches and a quarter-inch or less deep. Medtronic is a very innovative, high-tech company, and it basically created the modern medical-device industry.

We have nearly 150 lawyers around the world in 19 countries. When you’re as big as we are, you can’t do everything yourself. So, ultimately, my job is to be the manager of a big law department. My lawyers do everything from intellectual property work to employment law to regulatory stuff to litigation to deals to providing legal advice. Given that I can’t do everything, I keep on my credenza a little handwritten list of the top 10 or 20 matters that I need to be personally involved in. Otherwise, I try to hire really good lawyers and motivate them to do good work rather than micromanaging them.

It’s a fascinating time to be in our industry. I got here just in time for the big battles on health-care reform. Our government affairs team tried to shape that legislation and avoid any significant harm to our company. I was very involved in that. It’s a time of dramatic change. We’re under pressure from insurance companies and regulators to reduce prices and show that our products are the best. It’s an enormously challenging job, but it is fun almost every day because I’ve got great colleagues and our company has a great mission.

If there’s anything I’ve taken away from being involved in government and big companies, it’s to always tell the truth. Make sure you follow strong defensible processes because it’s often not the underlying issue that gets people in trouble. It’s the attempt to obfuscate afterwards. You can go back to Richard Nixon or Bill Clinton or almost anybody: it’s almost always the case that the cover-up is worse than the crime.