Kelley Steven-Waiss is a self-described “HR Anarchist.” When she joined Integrated Device Technology(IDT) as vice president of worldwide human resources, she had no intention of upholding the status quo. Instead, she approached her new job like a wrecking ball approaches a condemned building: she made it her mission to raze the human resources function and rebuild it from scratch.

“I first heard the term ‘HR Anarchist’ at a conference I attended last year … It was about breaking ‘sacred cows’ and ‘best practices’ and doing the unconventional,” says Steven-Waiss, who joined IDT—a San José, California-based supplier of semiconductors—in 2009. “I decided that day that I wanted to integrate and apply what I was consistently hearing in the engineering community around innovation—specifically, ‘disruptive innovation’—and ask: How does that apply to HR? I didn’t want to stand on the sidelines and wait for this renaissance in HR. I wanted be on the bleeding edge.”

Steven-Waiss is the ideal person to start an HR revolution in Silicon Valley. The seasoned leader didn’t enter human resources through traditional channels. She earned her bachelor’s degree in journalism and hoped to be an investigative reporter. Ultimately, though, she cut her teeth in retail as a store manager for the likes of Nike, Ann Taylor, Gap, and Limited. Although it wasn’t the evening news, it was a perfect fit, as she’d grown up in the retail business, working summers at the hardware store and nursery that her grandfather owned. “The core tenets of running a store are very similar to running a business,” Steven-Waiss says. “It was a great training ground.”

An even better training ground was Destinations Travel Clothing Co., the retail store that Steven-Waiss established in San Francisco’s Ghirardelli Square in 1998. “It’s the best business training I could have ever had,” she says, recounting how she started the business with an SBA loan and owned it with her husband until 2006. “I liken it to earning your MBA in the school of hard knocks, [because] you’re 100 percent accountable for [the business’s] success or failure.”

While she was working in retail, Steven-Waiss received her master’s degree in human resources and organization development. In 2000, she became a senior organization development consultant for Watson Wyatt Worldwide, consulting in areas such as organization design, leadership development, and change management. Ultimately, however, she decided to leverage her journalism background to reinvent herself as a change communicator, helping organizations communicate strategic changes to their employees during times of restructuring. 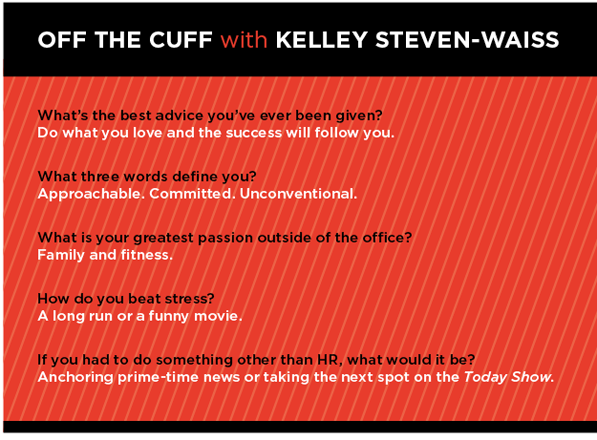 That’s how she ended up at IDT. After spending several years as a change communicator, Steven-Waiss was recruited by one of her clients, also one of IDT’s competitors, PMC-Sierra, to be its vice president of worldwide human resources. A year later, IDT called—and she answered.

“It was the best move I ever made,” says Steven-Waiss, who reports directly to IDT’s CEO. “I have the opportunity to be a valued partner to the CEO. That’s a relationship that most HR people salivate over.”

Such a position is all part of her mission as an HR Anarchist: Human resources has traditionally been a tactical function that manages personnel. Instead, Steven-Waiss wants to make it a strategic function that drives business results. “People in my discipline often say, ‘I really want a seat at the table,’” she says. “What I did is: I just sat at the table … I try to add value to every single interaction I have from a business point of view first, and an HR point of view second.”

“I decided that the best way to get started in adopting my ‘HR Anarchist’ point of view was to break something,” Steven-Waiss says. “So, this year, I began throwing out performance ratings. Next, I’m hoping we can throw out performance reviews altogether. One of the big questions you get when you make these kinds of changes is, ‘How do you expect to drive performance?’ It’s a good question, but only if you come from a strictly HR point of view. There are much better questions to ask from a business point of view: What is the business trying to achieve? What behaviors and actions do we believe directly link to our success in achieving those objectives? What challenges internally or externally stand in our way of creating the environment for those desired business outcomes? It’s not about managing performance; it’s about getting results.”

Speaking of results: For Steven-Waiss—whose grandfather advised her to always “own the shop”—the best result she can hope for is one day becoming a CEO. “I would love to run a company someday,” she says. “Not many HR leaders aspire to that, but I do.”