It was a cold January day when John Gongos rolled up the sleeves of his pinstripe button-down, donned his pride with a Detroit Tigers cap, and set to work separating poultry in the Grace Centers of Hope kitchen. The meat was for the turkey chili that would be served to the less fortunate. Gongos’s silver watch gleamed as it peaked out of his plastic gloves.

Before donning an apron, Gongos and several employees from his company, Gongos Research, had trudged through the snow that is typical to Pontiac, Michigan, for that time of year. They had come to serve lunch and to survey the site of the future Hands of Hope Childcare Center. The sparse rooms and empty shelves of the center’s future day care weren’t much to look at, but they were the foundation of a project that would benefit the young children of the shelter’s homeless residents upon completion.

When he had first visited the Grace Centers of Hope, Gongos stood out as a clean-cut, successful CEO of a $23 million company. But what stood out to him was the number of single mothers and their children taking refuge there. Strapped for space and lacking the funds to expand, Grace Centers’ basement had been turned into a makeshift crib room. With three kids of his own, Gongos’s heartstrings were pulled. The president and CEO levied his firm to the cause.

In July of 2012, Gongos was diagnosed with stage four metastatic melanoma and passed away eight days later, leaving Gongos Research, his successful start-up, to continue without him. When he first started the company, Gongos imagined a company committed to professional and personal growth. Having grown from four employees to more than 110 since 1991, one man’s dream of doing marketing research better has become a reality. GreenBook, a blog that covers global market research, has lauded the company for its innovation. In 2007, Gongos Research was named to the Honomichl Top 50 Report, which identifies leaders in revenue generation across the market-research industry. Based on US revenues, the company ranks 42nd.

But these quantitative successes don’t fully describe the man that made them possible. Gongos preferred to take pride in the positive, humanistic impact his company had on its employees and its community. Especially in tough economic times, his people-first philosophy was not only rare, but his continual focus on it—even in tough economic times—was an anomaly.

When the business was still young, for the first 10 years or so, staying afloat was Gongos’s main priority. “For a small company like ours,” he said, “it’s very hard, when you’re going 100 miles per hour, to set aside time and make a difference.” But as the company became more self-sustaining, Gongos got serious about committing to charity and impacting the local community. He brought young, energized individuals together to form the “Gongos Gives” team, and rallied around the causes they were passionate about.

Making use of the company’s resources, the team contributed its research expertise at no cost to the church to which Gongos belonged. Prepaid calling cards leftover from an assignment were donated to victims of domestic violence who had to give up their cell phones. Through the Make-a-Wish Foundation of Michigan, Gongos Research sent a critically ill boy, Peter, on a Disney cruise, and heard all about it over an in-office, company-sponsored pizza party.

In the same month, Gongos Research hosted its 45th blood drive—another cause close to home for Gongos. As a young boy growing up in Sandusky, Ohio, he had tagged along with his father on American Red Cross disaster-relief missions. He learned the fragility of life and value of blood at a young age and never forgot. Inspired by an incentive program at his first job—give a pint of blood, take the rest of the day off—he instituted the Gongos blood drive at the company’s inception.

For all Gongos’s dedication to humanitarianism, Troy Schrock, Gongos’s business advisor, says “John was humble and chose not to draw attention to himself for what was being accomplished at Gongos Research, but rather to reflect that success onto the people around him.”

“He didn’t want to talk about the numbers,” adds Susan Scarlet, director of marketing and public relations. “For John, it was always about the thinking and the heart behind [the actions]. He empowered people to think better and be better.”

While the Detroit community was important to Gongos, making a difference in people’s lives began at home. Employees and colleagues overwhelmingly consider compassion to be his defining quality. He once purchased a plane ticket so that a former employee could locate her father. When a friend and co-owner of the company suffered a stroke and couldn’t come back to work, in 2007, Gongos continued to support him through visits and company outings to the ballpark. Scarlet recalls words Gongos spoke when she needed time away for personal reasons: “Susan, we’re not going to abandon you,” he told her. “Take the time you need to get better, and we’ll be here waiting for you.”

Words and actions such as these contributed to the bond that continues to hold the Gongos team together. Even in his last days, Gongos was never concerned with the future of the company as a business or a source of good will. “Gongos Research is an organization built to run without John,” Schrock says. “Make no mistake, he will be dearly and deeply missed, and no one can replace him as a person. However, he had the wisdom to let great talent grow around him. He had the resolve to place people in the right seats. He had the foresight to lay out a clear vision for the organization.” 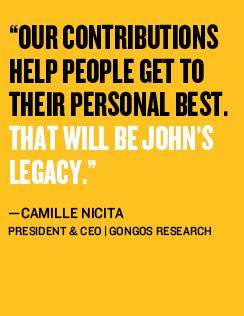 It was seven months after serving kitchen patrol that Gongos and the Gongos Gives team returned to the Grace Centers of Hope. The snow had melted. Inside, the day care had blossomed into a world of color and light. Murals of animals decorated the walls, and toys that couldn’t fit on the bright red shelves were neatly lined on the floor. Seeing the gratitude and happiness on the faces of the staff and beneficiaries was the payoff for months of work. It was one of the last times Gongos got to see his company’s impact, but his team will undoubtedly continue to serve in his name.

In his last interview, Gongos explained the impetus for it all. “One of the big advantages of owning your own company is that you get to make the rules,” he said. “I wanted to create a better place to work, and giving back is a piece of that puzzle.”

Shortly before his death, Gongos reflected on his role at Gongos Research and the purpose of his company with current president and CEO Camille Nicita. He told her he saw the company as more than a source of income. To him, it was a means toward improving the lives of others. Gongos was able to apply that outlook to his business as well as philanthropy. At the Grace Centers of Hope, just as in the office, “Gongos Research helps people achieve their personal best,” Nicita says. “That will be John’s legacy.”